GayCities had the chance to catch up with performance artist, rapper, notorious bear about town, Big Dipper. He told us all about his upcoming music videos and what to expect from his headline performance at Bearrison Street Fair in San Francisco, October 23rd.

GC: What are you working on right now?

BD: “I haven’t shot much this year because I was unsure about production conditions during the pandemic. But now I’m ramping back up. I shot a video in August, I just shot one last Saturday, and I’m shooting another one in February. We’ll probably release them all in early 2022.”

“I have friends who make music, and they tell me, “I could sit in a studio all day and just write songs. That’s what brings me the most joy.” To me, what brings the most joy is live shows, performing in front of my fans. That’s why I’m so excited to come to San Francisco and headline at Bearrison on the 23rd.”

GC: What can we expect from your performance?

BD: “I’ll be performing some classics as well as new music off my latest release The Ham and Cheese EP. The Boys of Bearlesque will be dancing with me. Expect a lot of costume changes, choreography, super high energy, and lots of fun. It’s going to be a spectacle.”

“Get ready for a show-stopping performance.”

GC: Where are you hanging out after the show?

BD: I love Oasis, the Eagle, and Lone Star Saloon. They are all located right next to the fairgrounds.

Join the Sisters of Perpetual Indulgence and the Bears of San Francisco for their very first Bearrison Street Fair, a celebration of body positivity and community.

Bay Area professional bear wrestler MarcoMania, alongside other awesome talents, will be competing for a custom belt. Hosted by A. J. Kirsch, as seen in WWE Tough Enough as Broseph Joe Brody, you won’t want to miss it.

Bearrison will follow all SFDPH guidance regarding COVID-19 safety. Come masked and vaxxxed! 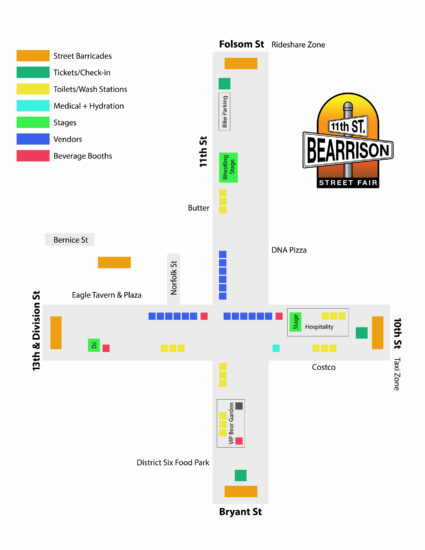 While there will be drinks available at the fair, you might want to stop at these local haunts for a bit of R&R.

Need a place to crash? Check out these LGBTQ-friendly hotels in San Francisco.