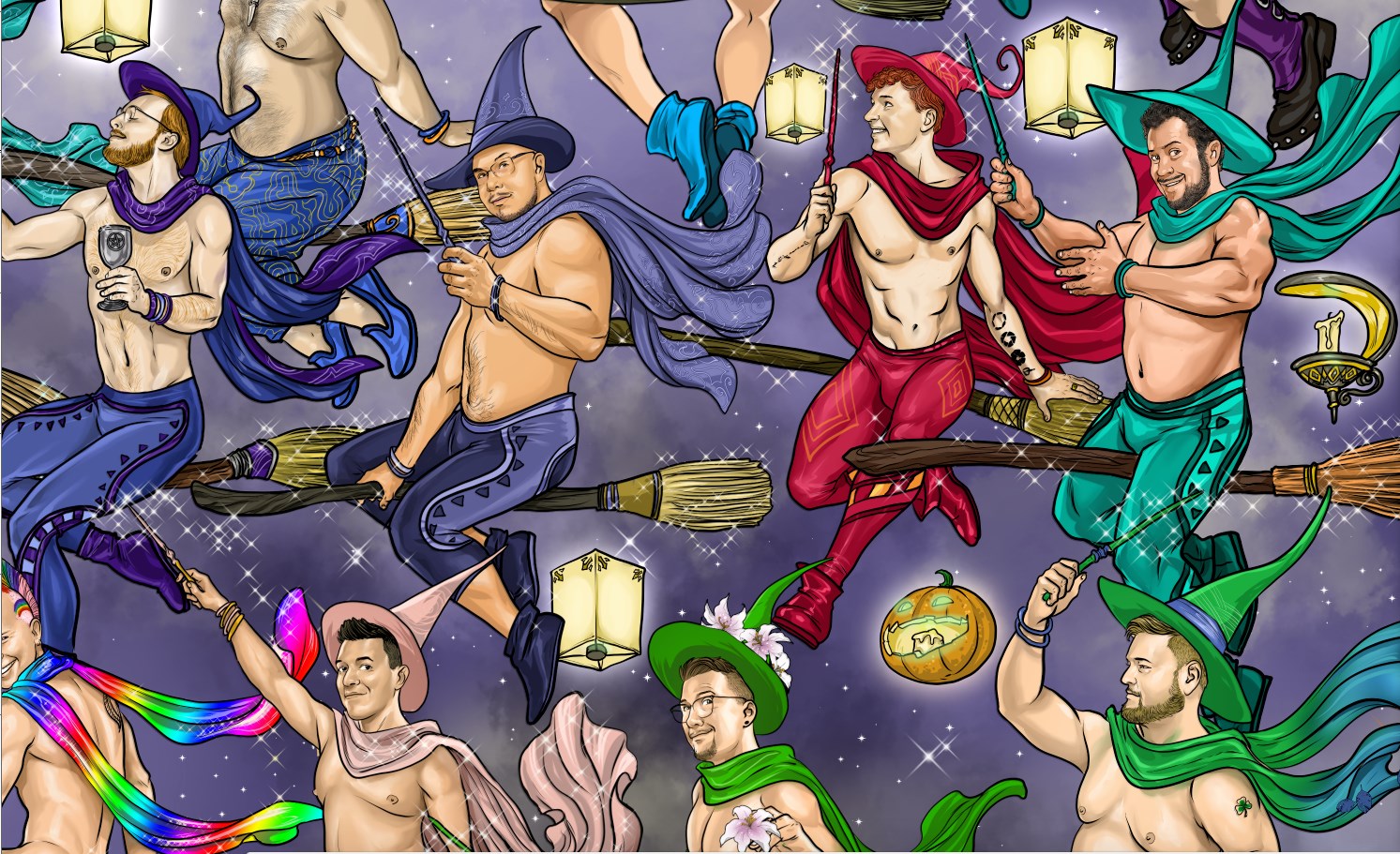 The San Diego-based artist started with a single bootylicious boylock riding on a broomstick. Since then his Witch Boy series has conjured up a coven of queer occult cuties, featuring a full prism of diverse ethnicities, ages, and body types, which has garnered a cult following on social media. As the reigning supreme of queer witchdom, we kiki-ed with Phillips about his art,  the once and future “nerd Mecca” of Comic Con, and the hottest hangouts of the Hillcrest gayborhood.

Where did the idea for your Witch Boy series originate?

It’s something that’s been in the back of my mind for a long time. I did the original witch boy drawing a couple of years ago for Halloween. The following year I wanted to do something fun, so I did them in rainbow colors. That seemed to really spark for a lot of people. It snowballed from there.

Why do you think these witch boys resonate so strongly for gay men?

There’s a lot of different reasons. It’s an alternative community. It’s not a Christian community, it’s not a religious community. It’s spiritual, but it’s a connection, it’s free-thinking, it’s experimental, it’s accepting, it’s Bohemian. It’s got all the things they already love. 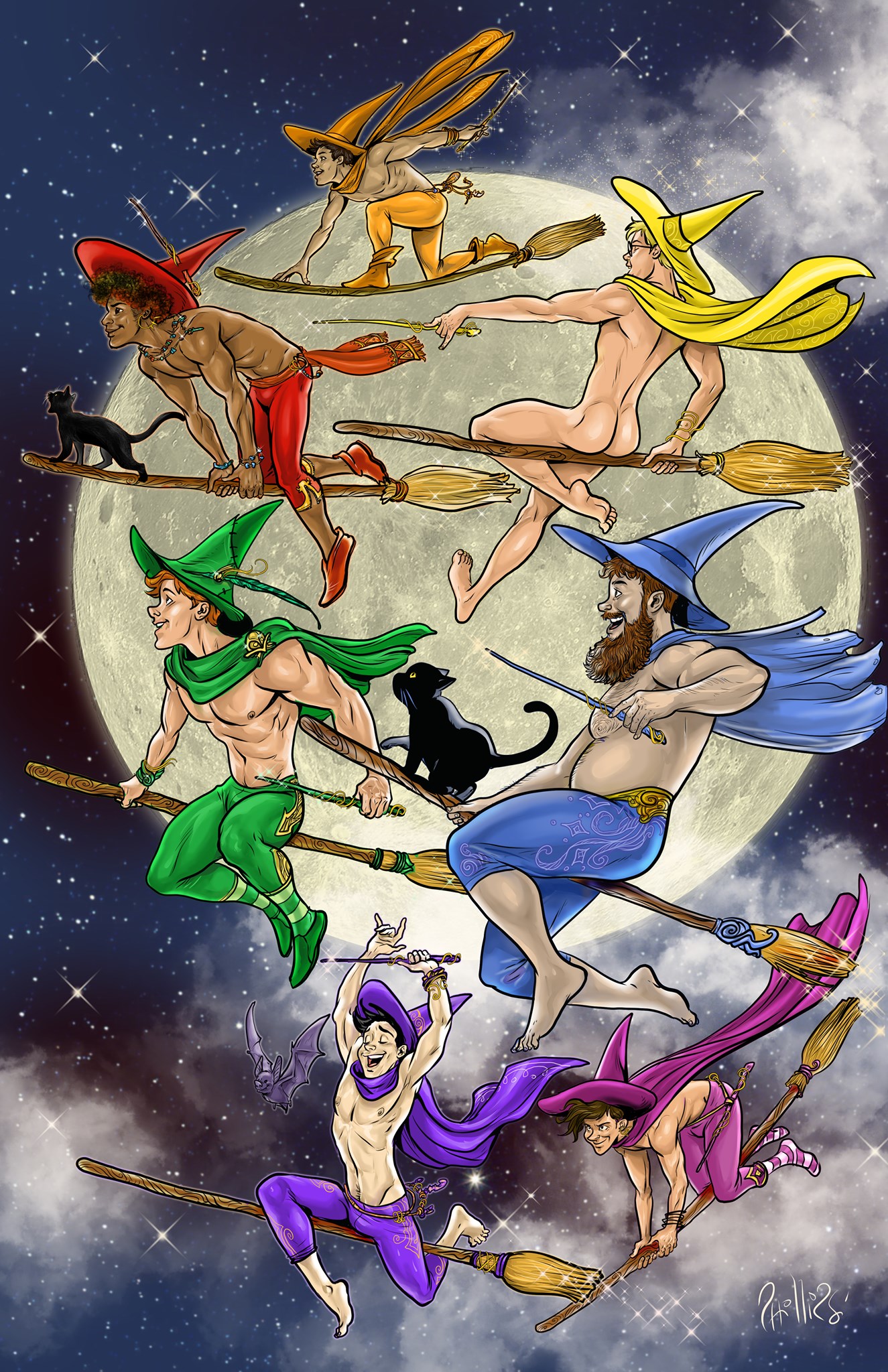 I know it’s like picking a favorite child, but do you have a favorite Witch Boy?

Whichever one I’m working on next.

Are you working on something next?

Always. They come to me. I know that sounds artsy-fartsy but it’s true. In my mind, they have their own world and ideas. We started the Witch Boy community on Facebook, so we can talk back and forth. It started out with a few hundred people. Now it’s like 4,000 members. Now people are talking about different types of magic, and crystals, and whatnot. I’ll see something or resonate with something going on in the community and make sure to show that in a piece of artwork. 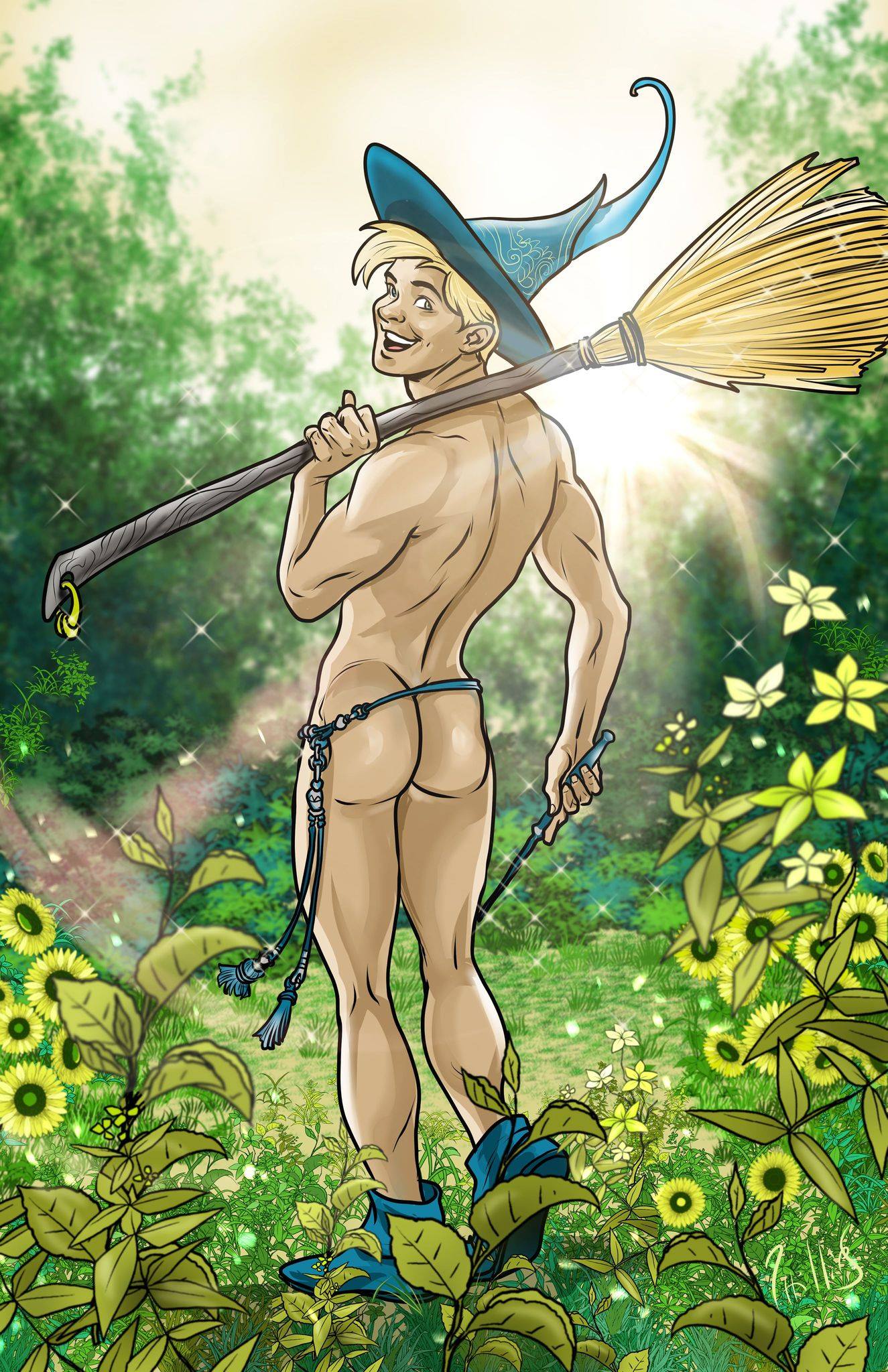 Do you identify as Wicca?

No. Wiccan isn’t even the predominant belief system of the people in the group. There are practitioners of simple magic and stuff like that. When I grew up, my grandma was a spiritualist minister, but also a bit of a witch. So she cast spells and taught me good luck spells, money spells, protection, things like that. It was always there in the background.

Your art features an array of ethnicities and body types. Why do you feel it’s important to feature diversity in queer art like yours?

I just draw the people as they come to me. I have friends of all stripes, so I create from all stripes. I do not like the idea of agenda art. Like, ‘Oh, this is what’s in the zeitgeist now.’ That’s great but if you don’t know these people, it comes off flat and fake. These are people I know, every size, age, ethnicity. It’s just what I see. 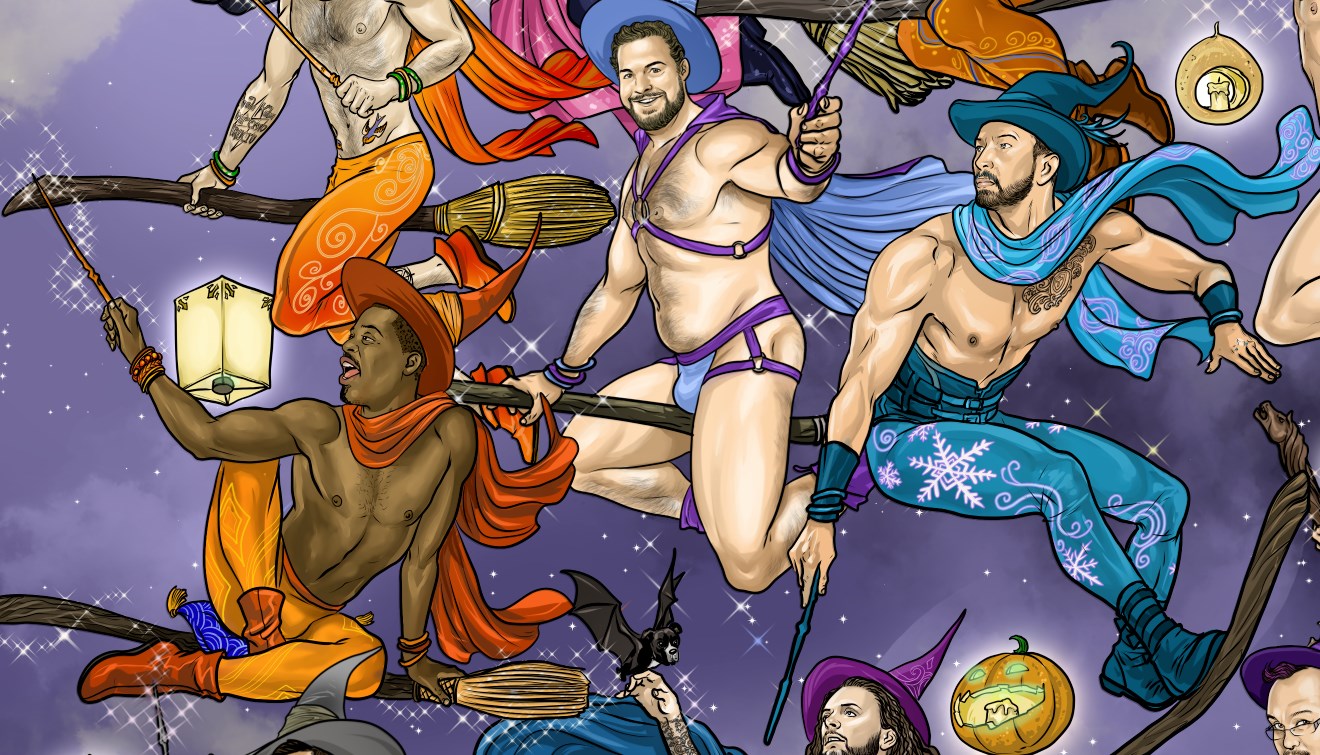 So, you are part of the gay artist in San Diego. Have you done Comic Con?

As a fellow gay geek, why do you think there is such an overlap between the gay and geek communities?

Geek culture is usually introverted, people that need escapism. I think queer culture had that all wrapped up in it. I mean, that’s what we did. You weren’t allowed to be out and about, so you would stay in and read comic books, or futuristic stories, or fantasy where you could be accepted. It’s always been hand in hand. I don’t think you can have one without the other.

Do you have a favorite Comic Con memory?

I shared an elevator with Mark Hamill once. That was kinda cool. But, I think one of the coolest things was from a few years ago. One of the guys that always comes to my table, brought his son. When he’d come by originally, he was probably like 12 or something. Now, many years later he has his own kid and I’m drawing a picture for him. It’s cool that after 20 some odd years he still remembers that I drew him some Spider-Man artwork. 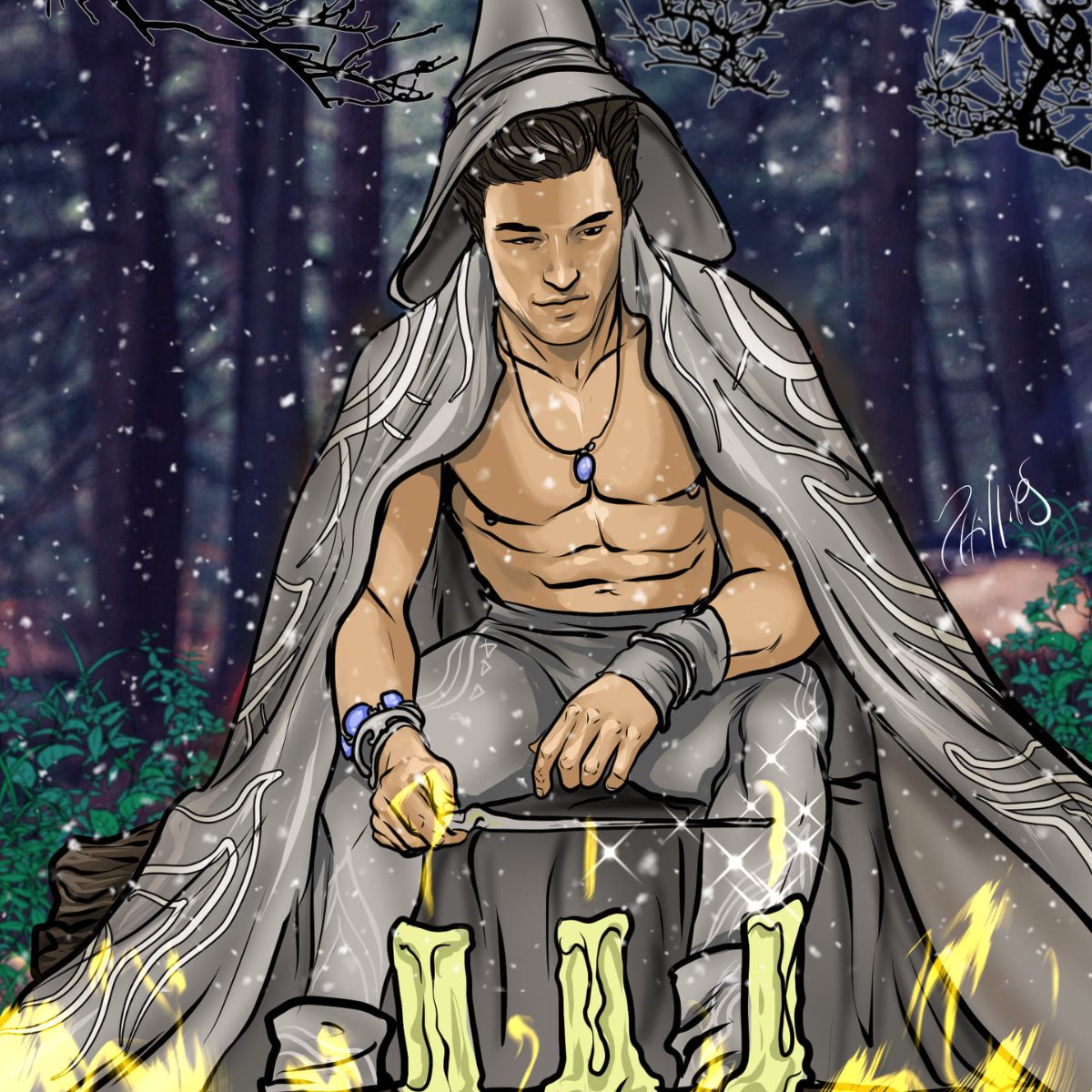 This month, California finally lifted its Covid restrictions and it’s relatively safer to travel now. For all the gays coming down to visit San Diego, where would you recommend we go?

You can go to Rich’s if you are interested in going to a club. You can go to Lestats if you want to go to a coffee shop in Hillcrest. If you want food you can go to Urban Mo’s. They have great American food.

As for comic book shops, the ones I liked are all closed.

Aww, sad. As an artist can you recommend any galleries?

The Alexander Salazar Gallery is great. 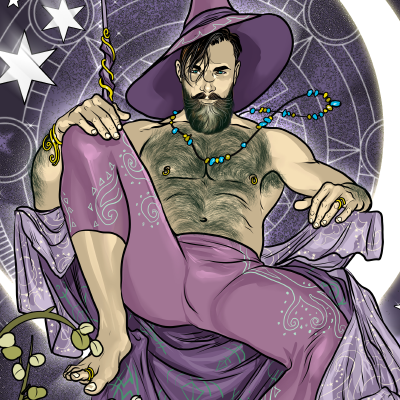 Now that things are reopening where do you want to visit first?

I need my European vacation. I want to start off in England, then go to Ireland, then back down to France. I have a lot of friends in Germany, a lot of my books were printed in Germany so I have a lot of fans there. Norway, Denmark, yeah, I’m looking forward to spending a couple of months abroad just saying hey to everybody.