Queer Eye’s Karamo Brown and Chris Salvatore appear to have enjoyed a romantic weekend together in Hawaii.

The two men have shared photos and videos on Instagram together since late last summer, leading many to speculate whether they were more than friends. At Christmas, Salvatore shared a video with a brief kiss between him and Brown, which fuelled speculation further.

Brown was previously in a ten-year relationship with TV producer Ian Jordan, but announced in September that they’d split. Brown said on the Ellen Show they’d split around three and a half months earlier.

On Sunday (Valentine’s Day), Brown shared a photo of himself and Salvatore on Maui. Known as the “The Valley Isle,” it’s the second-largest Hawaiian island, and is famed for its beautiful beaches. The men took a mountain hike, and the caption – against a backdrop of some stunning scenery – simply said: “Maui… you own our hearts!”

Salvatore was among the first to respond, with a string of love hearts: “❤️❤️❤️”

On his own Instagram, Salvatore posted a video clip of himself holding hands with – what most are presuming was – Brown’s hand. It was taken on the beach at the Ritz-Carlton, Kapalua. The caption said, “Happy Valentine’s Day. Feeling grateful, happy and loved. Hope your day is filled with all of the same.”

Among those to comment, one follower said, “Chris, I have been following your story since the Norma days. Today, I know Norma put Karamo in your path because you deserve that and much more. Sending love.”

Norma was an 89-year-old neighbor with leukemiaia that Salvatore took in and cared for when she became too ill to look after herself. She passed in 2017.

Salvatore responded to that comment with: “This is so sweet thank you ❤️” 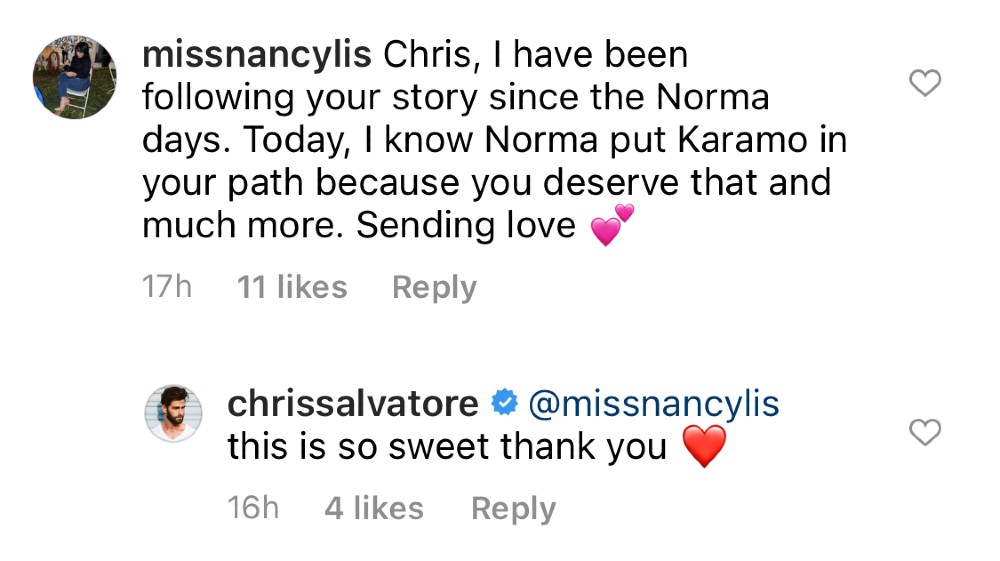 On an Instagram story, Brown posted a photo of him and Salvatore, wearing facemasks, on a plane home, saying: “What a weekend… Going to miss Maui.”

Hawaii is currently open to trans-pacific travelers, but anyone wishing to visit must present a negative test conducted in the hours prior to arriving or be prepared to quarantine for ten days upon arrival. More details on the Covid guidelines here.