The city of West Hollywood, which was established in 1984 as the first city in the U.S. to have a government with a majority of openly gay officials, is the site of another achievement: it has licensed the first “cannabis cafe” in the U.S., a restaurant with two menus: one for food, and one for products containing tetrahydrocannabinol (THC).

The Cannabis Cafe provides a laid back, stylish, and surprisingly conventional venue for patrons to nab a nosh, eat up an edible, and blaze up a bong full of bud, all in the same place.

In addition to pre-rolls, Cannabis Cafe offers hash, keif, and fresh flower. But be warned, if you want to use the on-site paraphernalia to smoke these, the cafe charges from $10 for a pipe to $85 for a gravity bong. Additionally, you can bring in your own bud, by they charge a $20 “toke-age fee” (their equivalent of a corkage fee). Thrifty smokers would be wise to stick with a pre-roll.

There are two categories of servers: traditional staff handles food orders, and then there are “flower hosts” who deal exclusively with the THC edibles and greens. For legal reasons, the two categories are rung up separately, and patrons have to settle the bud bill as soon as it arrives to their table, instead of paying for it at the end with your meal. Besides that, Cannabis Cafe is a normal Cali-fusion cafe, which just happens to be full of bubbling bongs.

Pot smoke permeates the restaurant, and with it that famously pungent smell, so anyone who suffers from osmophobia should not visit this establishment. But in an ironic twist, cigarettes or any other smoked tobacco products are strictly verboten, as per California law. GayCities called the West Hollywood Division of Community and Legislative Affairs and asked about this duality in the laws, but they did not return our message. Perhaps they were at the Cannabis Cafe, and they forgot?

Interior of the Cannabis Cafe, photo by Wonho Frank Lee

With a moniker like Cannabis Cafe, one would think that pot is baked into every item on the menu. But in reality, the edibles options are quite limited, consisting solely of infused beverages and snackish confections. We recommend the Blood Orange and Cardamon Cann, described as a “sparkling social tonic.” (Think La Croix infused with 2 mg of THC.)

The evening’s amuse bouche was a tin of Mindset Organics’ peanut butter colitas. These little sugar-blasted bon bons taste like a dollop of Reese’s Peanut Butter Cups, and pack 5mg of THC each, providing a mildly spacey, heady high. 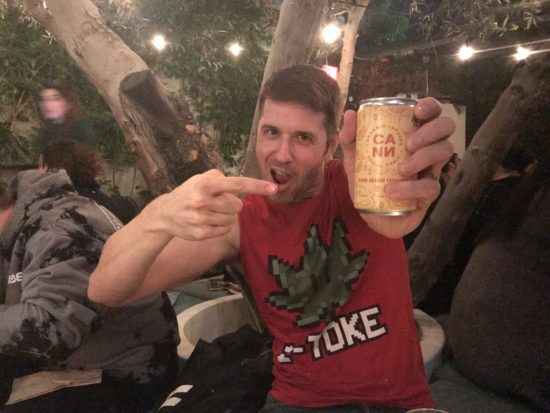 We also tried a Stone Road infused Sour Patch pre-rolled joint, a hybrid of cannabis varieties that contains over 20% THC, and provides a giggly euphoria. One of these is more than enough to split between a table of two.

The food menu is a seasonal selection of appetizers, entrees and sandwiches like any traditional cafe; the Smash Burgers that we ordered were large and greasy, and fell apart as we ate them, but the fries game at Cannabis Cafe is on point. Chips and guacamole were also tasty. This is the kind of place to order food for the table to munch on, and enjoy the experience. And, as the nation’s first cannabis cafe, hitting up Cannabis Cafe is like hitting up a little piece of American history.

GayCities can be contacted at [email protected]