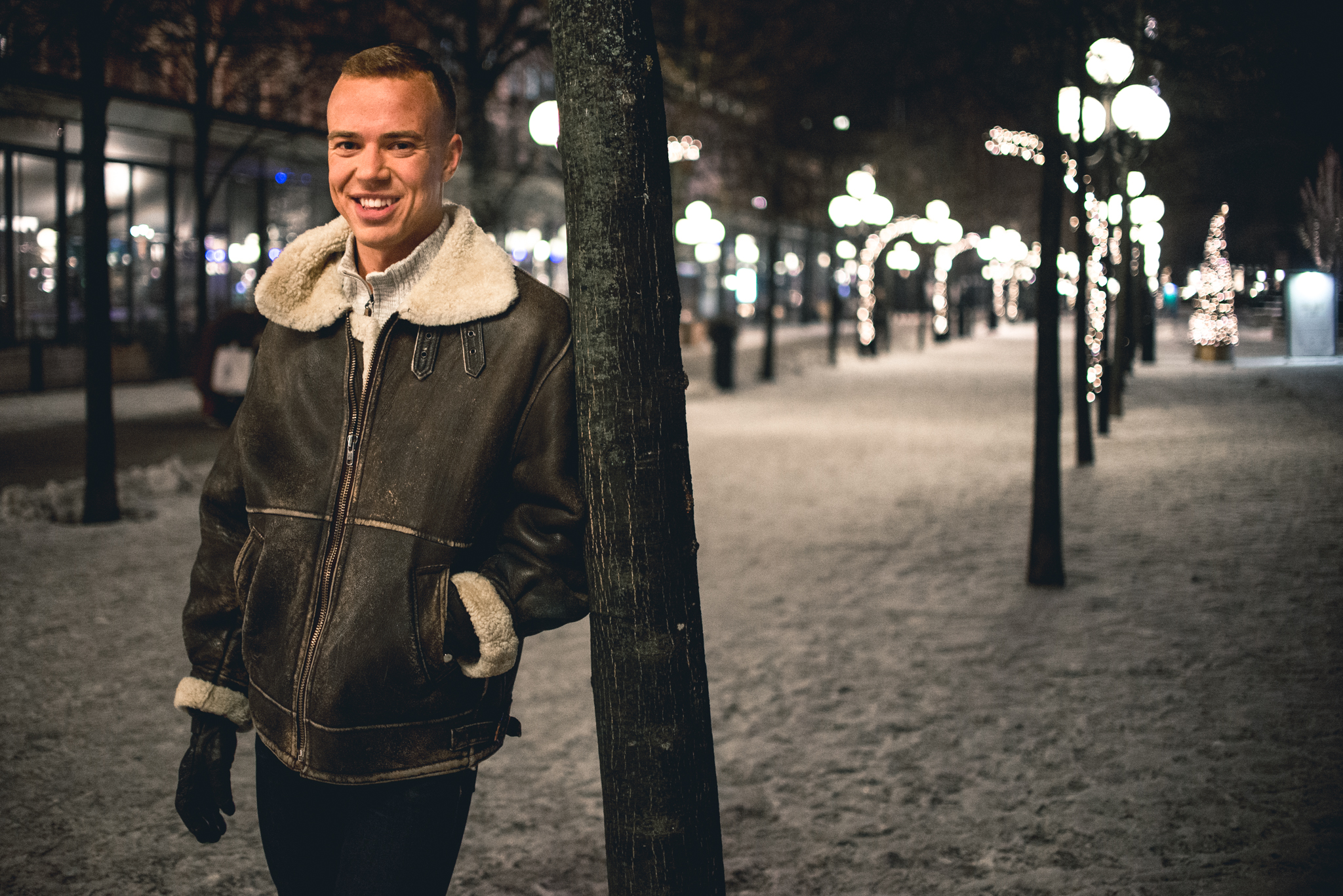 Liam Campbell is editor and photographer of the indie print mag, Elska, a project that involves around the world, befriending some regular local guys, and introducing them and their city through honest photography and personal stories. It’s good work if you can get it.

This article is about his trip Stockholm, Sweden.

Below Liam exclusively shares with GayCities a selection of photos along with a bit of behind the scenes commentary about each session.

I always wanted to visit Stockholm. I guess you can say I’m a Swedophile, from my adoration of Robyn, to my home full of IKEA furniture, to my closet full of H&M clothes, to my over-fondness for cinnamon buns. I also really love a winter landscape but I rarely photograph in the winter because I imagined it would be too difficult to spend hours and hours photographing in sub-zero climes. But I’m so glad I decided to go for it. Even though when I arrived in Stockholm it was dry, the snow started to fall during the very first shoot as if it were falling just for us. Here with Linus we walked out to the north shore of Södermalm after a fresh dusting and started our shoot against the background of Stockholm’s Old Town. Stockholm is truly one of the most beautiful cities in Europe, and it’s even more spectacular in the middle of a white powder winter.

One of the problems with shooting outside in the winter is that the guys have to be really wrapped up, and since most people don’t have multiple coats, it limits the amount of style variation you can see. (Even though Elska isn’t a fashion magazine, I do like expressing the men’s personalities and culture with style). However I did ask everyone just in case they had more than one coat, and Albin here did, but he was really nervous about wearing that second coat. I’m not sure if it was real fur, or just looked like it, but he was scared to wear it outside in case people would cast dirty looks or throw snowballs at him! So we decided to try wearing it inside, and I loved how it looked. I think everyone should wear fur, or faux fur, with just a pair of briefs. Fashion trend 2019!

A definite highlight of any trip to Stockholm is a stroll through Gamla Stan, which is Stockholm’s Old Town. I did two shoots there, one during the daytime and this one at night with Mathis. My own rule is to only use natural and available light – no flash – which meant that we had to make use of the warm streetlamps that lined the snow-covered cobbled streets here. I think the romance of the setting comes through. I certainly felt romantic – the mood made me crush so hard on Mathis that by the end of the shoot I was terrified I’d say something embarrassing so I tried to rush away immediately. And when he hugged me goodbye, I was practically melting in the snow.

The coldest shoot of the week happened with Andreas when it was nearly -10C (14F). It wasn’t long before my fingertips started going numb, so I kind of rushed through the outdoor part of our shoot. Fortunately, when we got back to his place, Andreas went immediately to the kitchen, turned on the kettle, and showed me a selection of teas to choose from. We then warmed up over tea and a chat, before he crawled under his blanket for the rest of the photoshoot. Swedes really know how to do cozy very well.

On the first morning in Stockholm, I met Ross. He used to work as a tour guide and he took me to his favorite spot in the city, Riddarholmen, an island just west of the Old Town. I made the mistake of thinking that a 9 am meeting time was late enough to have plenty of daylight. But even then the sun wasn’t quite up. So we had to wait around about half an hour more to get enough natural light, even though he was in nothing more than a denim jacket. I thought to pop into one of my favorite cafés – Chokladkloppen, a gay-friendly place, but it wasn’t open yet. Ross was a trooper though, and once we got back to his place, he, like Andreas, put that kettle on immediately.

One thing you’ll notice about Swedish guys, and most Scandinavians actually, is that they’re pretty quiet, calm, and reserved. In fact, of all the men I met here the only one who was genuinely outgoing, and maybe a little bit of an exhibitionist, was the last guy I met, Mikael. In fact, he was actually so gregarious that I became intimidated. He later asked me if there was something wrong because I was so quiet. I guess being in Sweden for a week made me become as shy as most Swedes, and when I explained (and apologized), he told me that he’s got some Polish blood, and maybe that’s why he’s not a typical Swede. 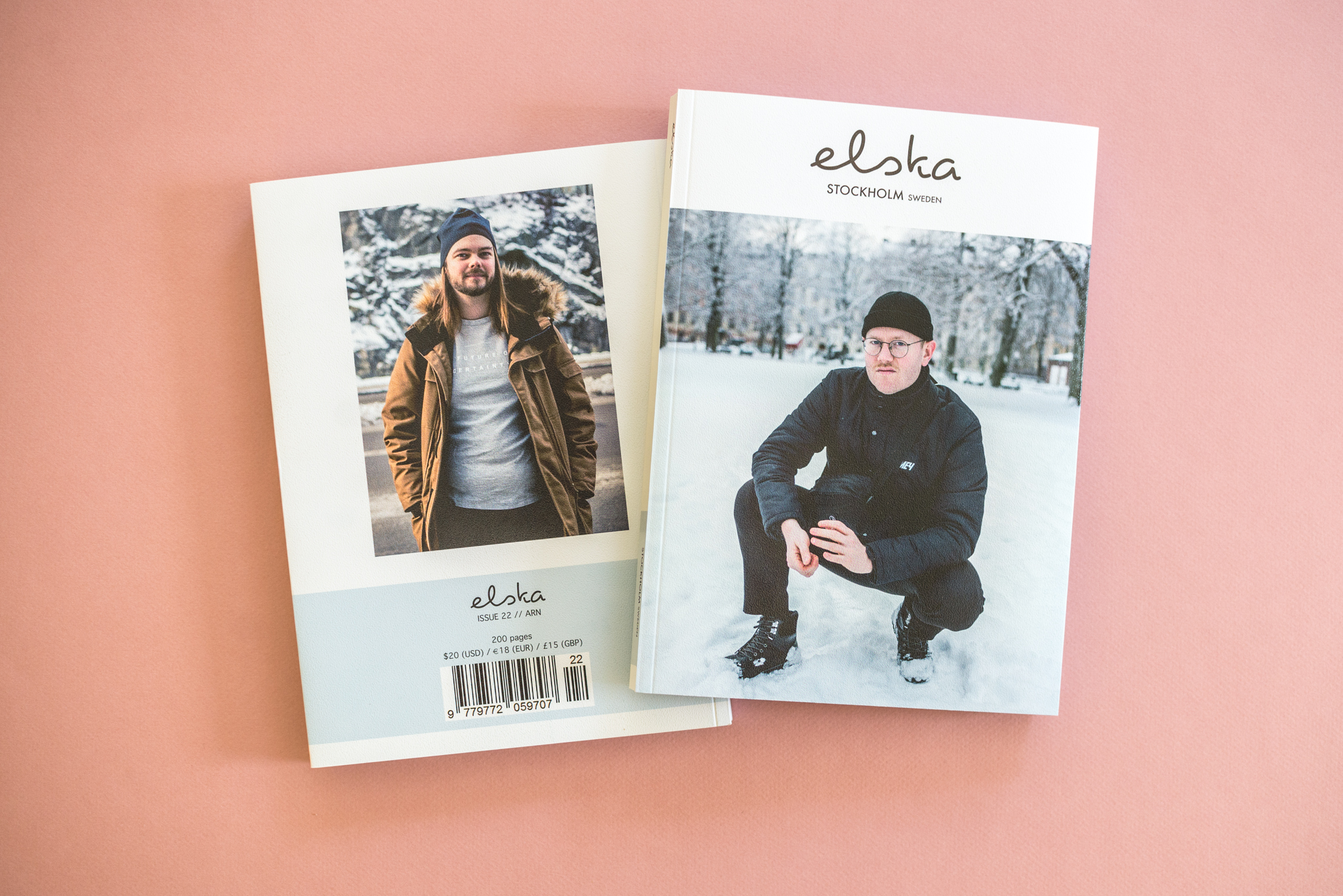 Elska Stockholm is out now in a 200-page limited edition print version and in an e-version.