With Delta breakthrough infections on the rise, Burning Man (the week-long desert bacchanal that is equal parts civic experiment/living art exhibit/celebration of sex, drugs, and EDM) has once again been officially canceled.

And while thousands of adamant Burners are flocking to Black Rock City for an unofficial, loosely planned “Renegade Burn,” (which is expected to either be historically epic or Fire Fest 2.0), many LGBTQ+ Burners opted instead for Something Queer.

Hosted at the Saratoga Springs Retreat Center, this Alternative Burn was like a summer camp for hot gay weirdos: they shared communal meals, participated in communal events, and fooled around in their communal bunk beds.

For the queer burners and defaulters who missed it, here’s our Alt Burn photo round-up to feed your FOMO. 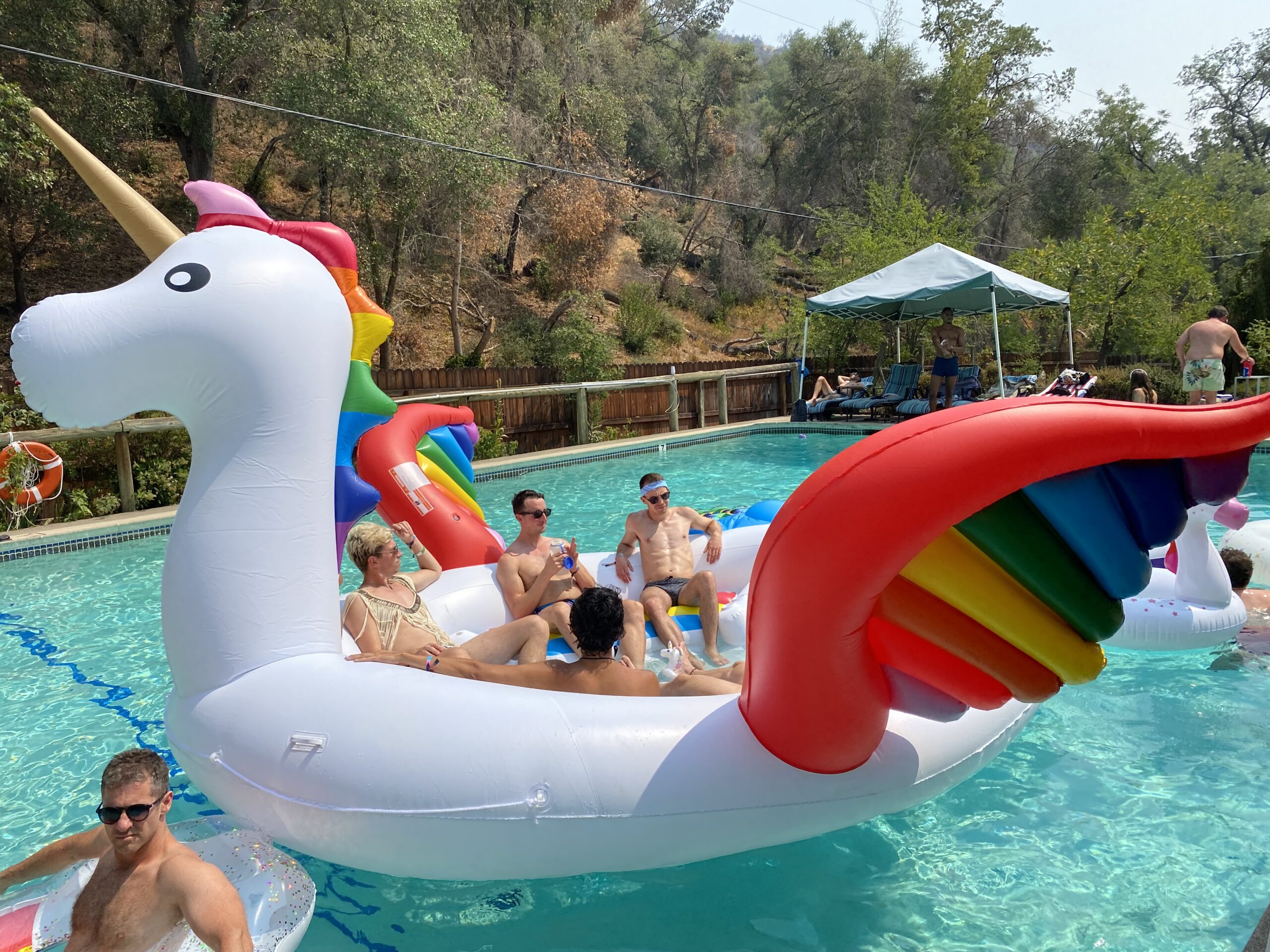 During the day, these Alt Burners basked by the pool, an amenity not found at traditional Burns. This inflatable unicorn barge quickly became the unofficial mascot of the event’s poolside kikis.

Rock Out With Your Cock Out

Members of many LGBTQ+ camps converged on Something Queer this year, including they gays (and gals) of the Glamcocks. This prominent fixture of Black Rock City’s gayborhood traditionally serves as a queer community center on playa, offering Burners cold brews in the morning, workshops in the afternoon, and dance parties at night. Above, Los Angeles‘ Michael Chagoya (known colloquially by his nom de Glam “Noodle”) sips from a Moscow Mule mug that sports a Glamcock homage to a certain coffee chain.

Part Of Their World

While the vast majority of Burners at Something Queer identified as gay, the event welcomed every gender, orientation, and integer on the Kinsey Scale. Here’s Ariel from the gender-inclusive  Gender Blender camp getting her GAAAY on.

For those uninitiated in Burner culture, people are divided into three categories: Veterans (experienced Burners), Virgins (those who are Burning for their first time), and those of the Default World (a term used to describe every place that isn’t Burning Man). One of the cutest couples of this year’s Something Queer was Veteran Todd (aka The Gifter) and his long-time partner, and Defaulter, Miguel.

Touched For The Very First Time

The Gift That Keeps On Giving 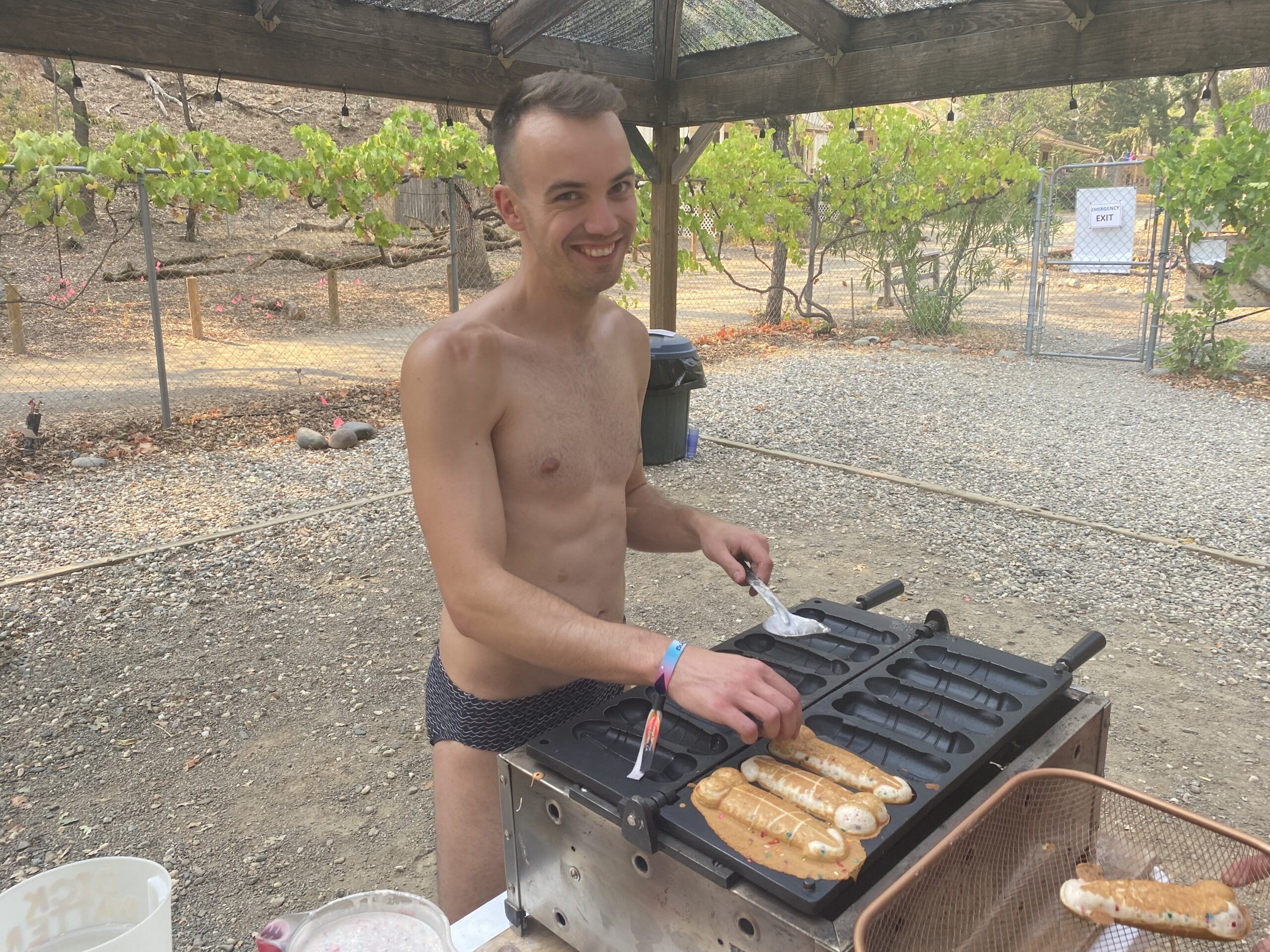 Burning Man is governed by a set of 10 principles, one of which is Gifting. This year, SF’s John Kinsella gifted his Burner brethren penile pancakes. These cock-shaped confections were delicious, but I have just one note, John. Next time, fill them with vanilla frosting for a better sense of verisimilitude. 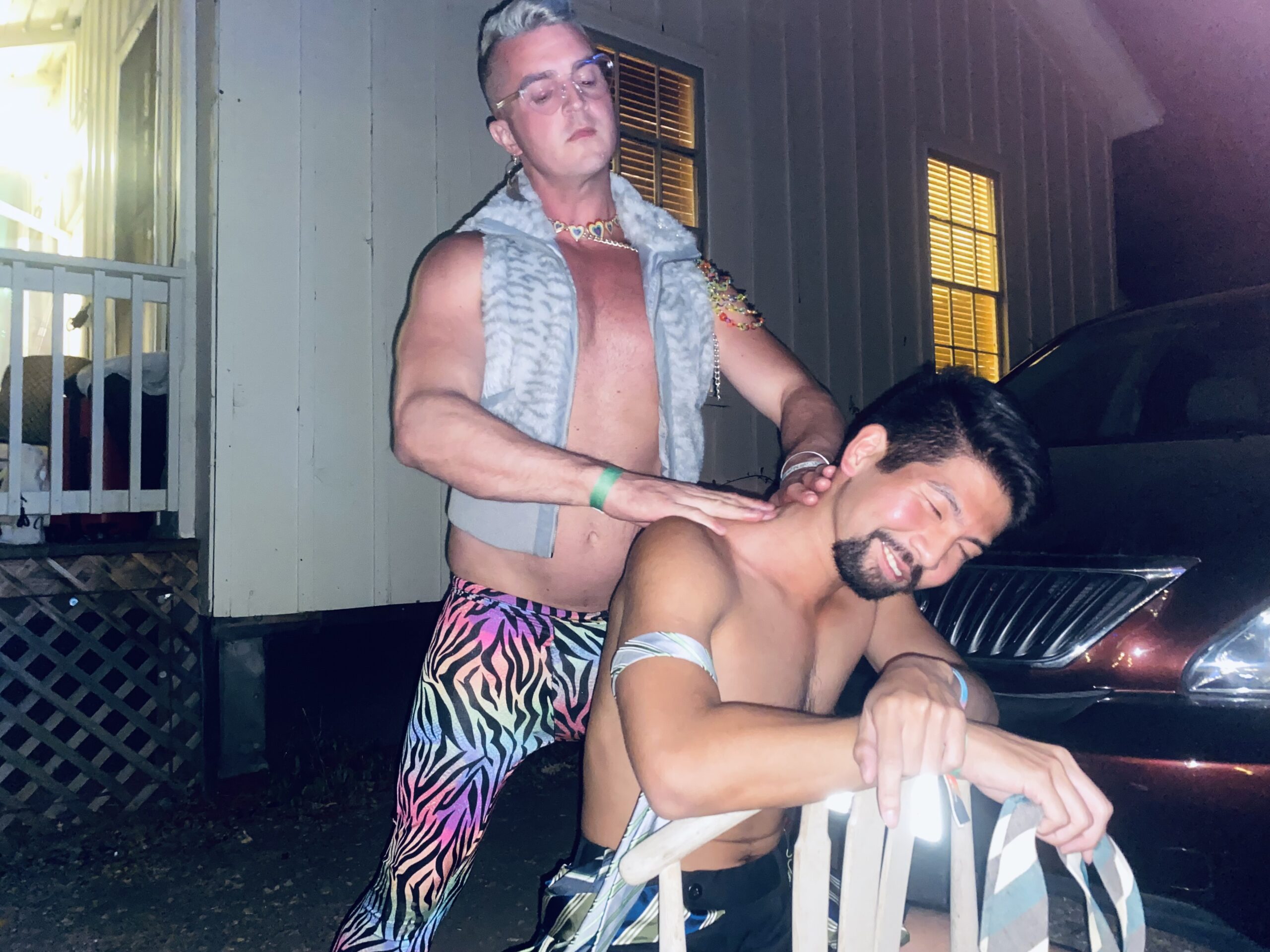 Gifting doesn’t always need to be objects. Some Burners choose to gift acts of kindness, like these consensual sensual massages from  Matt “Beacon” Tully of the New York Glamcocks.

Once the sun set, the kweens of Something Queer snatched a night lewk and strutted over to one of the many dance parties hosted across the venue. A popular theme was jock-couture, deftly modeled by Lucas “Baby Jesus” Bane.

Besties From Another Pair of Testes

In addition to 10 Principles, the Glamcocks boast an 11th: Brotherhood. BFFs  Shep and BamBam indulge in some bromo-eroticism with their coordinated wrestling singlets. Now hit the showers, boys!