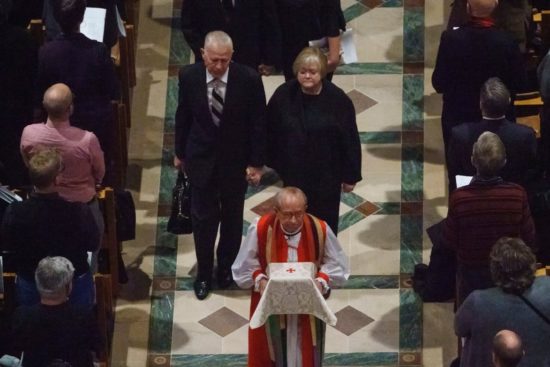 The incredibly moving memorial service for Matthew Shepard at the Washington National Cathedral on the 20th anniversary of his murder brought the world to tears.

Now two gay activists, Bob Witeck and Jon Barrett, have secured an agreement from the cathedral to place a bronze memorial plaque to honor the young gay man who was beaten, tied to a fence and left to die at the age of 21 in Laramie, Wy. The bronze plaque will be located in a a chapel outside the columbarium where he is interred and will be only the second plaque to be there—the other memorializes Helen Keller.

Barrett, editor in chief of Bloomberg Cities, spoke to GayCities about the memorial and the Go Fund Me campaign to raise money for it.

1. How did you come up with the idea?
It wasn’t only my idea. I think anybody who was at the service–or saw the service–last month saw the need to have some sort of lasting memorial to Matt. Anybody who was old enough to remember 1998 remembers how many people connected with Matt’s story when they first heard of his attack in Laramie, Wy. I definitely remember being one of the thousands who took to Santa Monica Boulevard for the vigil in West Hollywood and saw coverage from similar vigils across the country and around the world. It was clear last month–the 20th anniversary of Matt’s death–that people still connected to his story. It’s why the Smithsonian was so interested in Dennis and Judy’s generous donation of some of Matt’s possessions, and it’s why thousands of people attended the memorial service at the Washington National Cathedral–and so many more thousands of people watched the services online.

The columbarium where people are interred at the Cathedral isn’t open to the public, but there is a chapel outside it that serves as a spot for reflection. If you’ve ever been down there, you probably saw what is, currently, the only bronze plaque in there–honoring Helen Keller. It’s a striking tribute, mostly because part of the plaque is in braille and you can see–by how the bronze is rubbed off–how many people have been through the chapel and paid their respects to Keller.

The chapel itself is named for St. Joseph of Arimathea, a wealthy man who, as the Bible tells us, donated his own grave so that it could be used as Jesus’ tomb. Matt already has a beautiful place to rest—many thanks to his parents and the people at the cathedral. But there’s still something we can do to honor him: We now have the opportunity to add a second historic bronze plaque to the chapel—forever marking Matt’s final resting place.

3. Are there other LGBTQ memorials for our fallen heroes? There are so many, why Matthew?

There certainly are. There are many memorials to the way too many people who died of HIV/AIDS. I especially love the new AIDS Memorial in Greenwich Village, which is next-door to what used to St. Vincent’s hospital. There’s also the gay liberation monument outside of Stonewall, and tributes to Harvey Milk, and the Flight 93 memorial in Pennslyvania, which honors Mark Bingham–among the others on the plane that day. Why Matthew is a good question. I think it’s something that many of us have been asking for 20 years now. There was something about his story that many of us connected with. And I think it’s because we saw something of ourselves in him–and, if not in him–in his story. I think his parents have a lot to do with our connection, too. Honestly, they are the parents everybody and anybody would want. And I think that’s what makes his story stand out.

4. Which memorials have you seen that you liked? What makes them meaningful?
I already mentioned the new AIDS Memorial in NYC. Part of what makes it stand out to me is its location–it’s where so many of the people it honors lived their everyday lives and it’s next door to where so many of them spent their last days (at St. Vincents). It’s also just visually striking–it’s on a triangle shaped piece of land, it’s made of triangles, and it casts triangle shadows against excerpts from Walt Whitman’s “Song of Myself on the ground.

5. You are close to Shepard family, having written about Judy’s experiences. How do they feel?

Although they had a funeral for Matt soon after he died, it took them 20 years to inter his ashes because they never had a place where they felt he would be safe. I think they are so grateful to now have that place. And the National Cathedral is the perfect spot. It’s beautiful, it’s serene, it’s safe. The best way to describe how perfect this is to share part of what Bishop Gene Robinson said when he first welcomed everybody to the service:

6. What was the memorial service like?
Incredible, beautiful, overwhelming in a way. The is a place that hosts the memorial services of presidents–and just weeks before, senior statesmen like John McCain. On this morning, it opened its doors and rang its bells like crazy for Matthew Shepard. It’s a feeling of acceptance and welcoming that I haven’t felt since marriage equality passed. Certainly not since Donald Trump became president. Sitting there in that cathedral and thinking about all that’s happened in terms of civil rights in the past 20 years–many of it because of the attention that his story brought to our cause–was exhilarating and heartbreaking and then exhilarating and heartbreaking again.

Contribute to the campaign

Cosplay the Vote: How this gender-bent Evil Queen will vanquish super-villainous Trump and his Legion of Doom