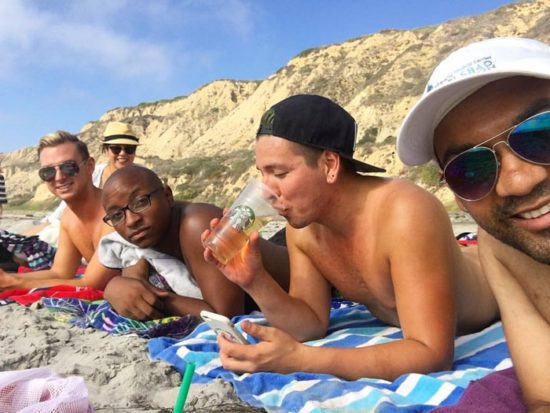 The last time I visited San Diego, I was about 7 years old and I remember frolicking around Sea World looking on in awe of the wildlife, especially the orca whales. Fast forward 30 years (yes, I just revealed my true age), I returned to the city with an eagerness and excitement that I haven’t felt in a while.

I’ve always heard of the vast dichotomy between Los Angeles and San Diego. However, it isn’t until you visit both cities that you begin to realize their differences and identities. Everything I don’t enjoy about Los Angeles, I found to be the opposite in San Diego. The most obvious difference, the traffic, is seemingly more bearable.

Much of San Diego is easily accessible via ride-share apps or the city’s trolley system. Although I didn’t have a chance to ride the trolley, I heard of its efficiency from talking with the locals.

On my first full day in the city, my sister and I decided to visit the famed San Diego Zoo. We got to experience a behind-the-scenes tour of the new Africa Rocks exhibition, more specially the penguin encounter. As we stood within inches of these beautiful animals, we got to observe their fun and sometimes quirky behavior. One of the penguins was even observed to be polyamorous, a trait not typical among South African penguins. 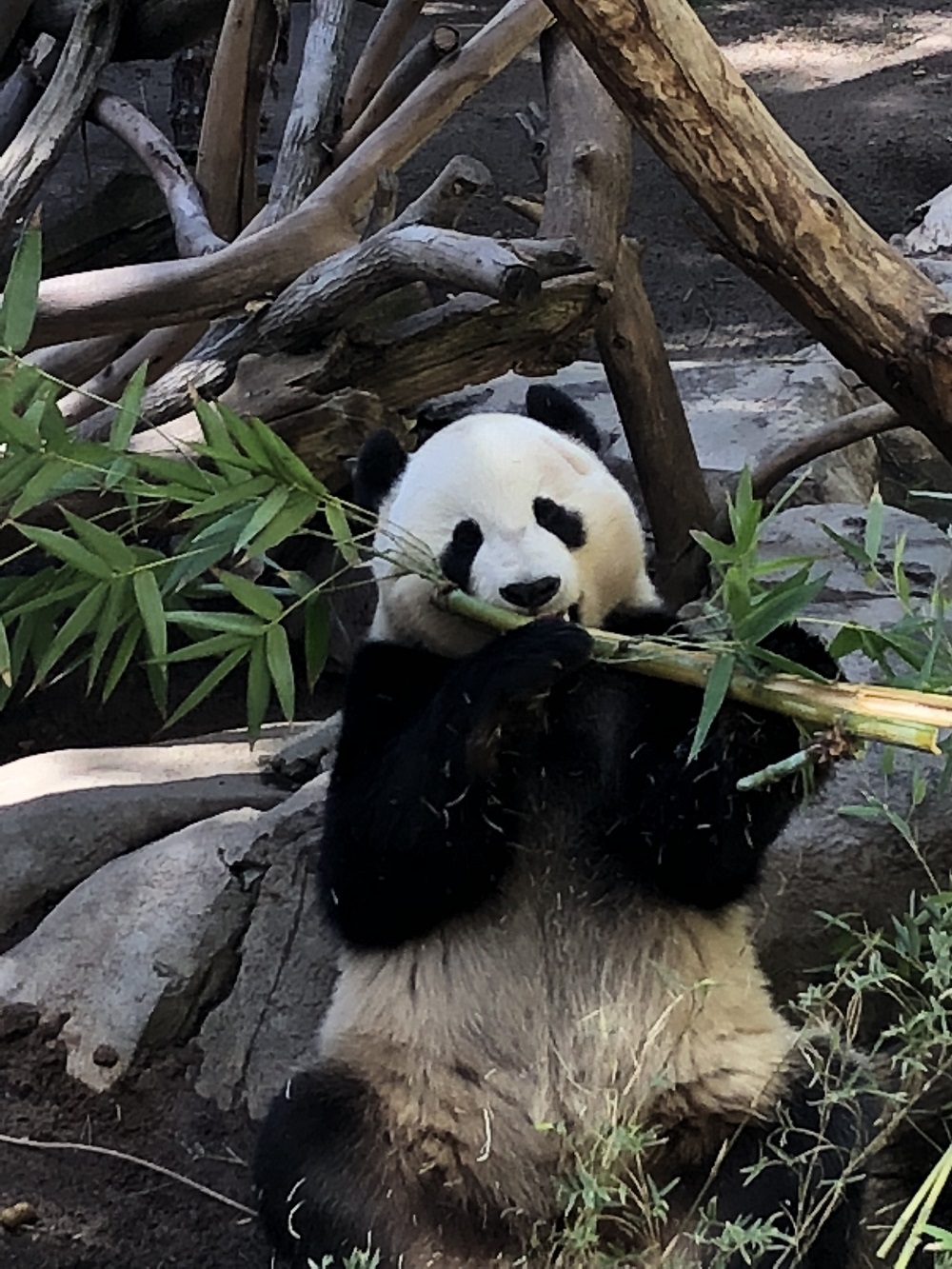 Next, we visited with the wildly popular giant pandas. Lines to view these cute and cuddly animals can stretch up to two hours, so be sure to include enough time in your trip. Our tour guide noted that two full days are needed to appreciate the zoo in its entirety. Unfortunately, we only had about two hours, so it was time to move on to feed the okapi, a member of the giraffe family, but visually similar to a zebra in terms of size and appearance. Okapi love interacting with guests, especially when they are being fed a leafy head of lettuce.

The San Diego Zoo is located in Balboa Park, a sprawling complex made up of dozens of attractions for almost every taste. Some standouts include the San Diego Air & Space Museum, Museum of Photographic Arts and a Japanese Friendship Garden among others.

One of the city’s newest and hottest restaurants, Born & Raised invited us for dinner. The massive restaurant appears as if you were walking into something out of the pages of The Great Gatsby. The restaurant has a casual formalness to it. Certainly not stuffy, as the wait staff can be seen rockin’ a pair of Converse shoes with their tuxedo. I would make Born & Raised a special occasion restaurant as the prices were a bit out of my comfort zone.

That being said, I would add Tiger! Tiger! to the list of establishments I would frequent on a regular basis. Certainly not as fancy as Born & Raised, and significantly less expensive, Tiger! Tiger! is a rustic gastropub located about 10 minutes from downtown. It doesn’t look like much from the outside, nor the inside for that matter. But what the restaurant lacks in appearance, it makes up in flavor.

I began my meal with a hearty side of Brussels sprouts, which were probably the best I have ever tasted. The dish also incorporated baby bok choy and bacon for a salty, savory explosion in my mouth. Also noteworthy is their take on clam chowder. No, it’s not New England, nor Manhattan. I guess, you can call it Pacific Coast chowder, and it was delightful. The white wine broth is to die for and the clams are presented still in the shell. It is light, flavorful and the perfect dish for seafood lovers.

While in San Diego, check in to The Bristol Hotel. The boutique property offers luxurious, but trendy accommodations. One of the highlights in this hotel is the massive electronic coffee machine in the lobby, which can instantly prepare anything from a vanilla latte to a chocolate cappuccino. Being a coffee lover, this was a call for excitement. It’s the little things in life that impress me!

The hotel would be a good place to stay if you plan to visit during San Diego Pride which takes place from July 13 to July 15. According to Alex C. Villafuerte, Marketing & Communications Manager of San Diego Pride, the festival attracts over 200,000 people annually, making it one of the largest civic events in the county. He also mentioned that the organization has given out over $3,000,000 in grants to other LGBT-serving non-profits and organizations worldwide. Profits from the parade and festival go right back to the LGBTQ community.

Speaking of Pride, San Diego’s Hillcrest neighborhood is home to many LGBTQ restaurants, bars and clubs and is where Pride takes place every year. Hillcrest is also home to the San Diego LGBT community center. The Center is the second oldest LGBT community center in the country and employs more than 50 paid staff. The Center provides program services to the many different facets of the LGBTQ community and those living with HIV.

Hillcrest has no shortage of gay bars. Some standouts include Urban Mo’s, Rich’s, Flicks, The Brass Rail and Martini’s Above Fourth. Also in the neighborhood is Club San Diego.

Visitors to the region who wish to be a bit adventurous can opt to drive to the U.S.-Mexican border and head to Tijuana for the day. LGBT owned and operated Turista Libre leads small groups on tours of the city, each with variant themes. During my visit, we got to experience the different types of local markets. Derrik Chinn, our tour guide and one of the owners is very friendly and knowledgeable about the local culture and history of Tijuana.

We spent the day exploring the city in a retro-fitted school bus complete with disco lights that synch to the beat of the music. We got to see where the locals shop, and eat, as well as do a little shopping and eating of our own. The people of Tijuana are friendly and willing to help those with limited Spanish language knowledge, as myself.

I’m not sure Tijuana warrants more than a day visit at the moment, although the city is trying to transform itself and attract more tourists across the border. If you are looking for a quick, inexpensive experience, I would head south of the border to Tijuana or even the Baja California wine country.

If street tacos and margaritas aren’t quite your fancy, head north to La Jolla, a beautiful coastal village with so much charm and character that I stopped into a local real estate office to inquire about the cost of apartments.

While in La Jolla, be sure to visit the Tony Award Winning La Jolla Playhouse. During the time of my visit, they were staging a performance of “The Cake”, a very timely story about a lesbian couple who wish to marry in North Carolina but runs into a hurdle when a local baker ‘politely declines’ to make their cake due to religious beliefs. I won’t divulge the entire story, but if you have a chance to catch this play, it’s well worth it.

La Valencia Hotel is a great starting point for your stay in La Jolla. The historic property is centrally located in the village and has unobstructed views of the Pacific. The 90-year-old property features Mediterranean-influenced architecture, hand painted murals and Spanish mosaics. While in La Jolla, be sure to visit the dozens of art galleries and cafes throughout the village. One of my favorite galleries on the strip is Legends Gallery, which houses an incomparable collection of Dr. Seuss and Mackenzie Thorpe artwork.

If weather permits, consider renting a kayak and exploring La Jolla from the ocean. Fitness buffs will enjoy this experience as it proves to be one hell of a workout. If you are lucky, you may even get to visit one of La Jolla’s many caves and say hello to dozens of sea lions that mingle on the shoreline.

After a physically draining day, head to A.R. Valentien, located in The Lodge at Torrey Pines for a romantic sunset dinner. The food, service and of course the view are incredible and serves as the perfect way to bring your vacation to a close and reminisce on all the memories you’ve had during the past few days in San Diego. 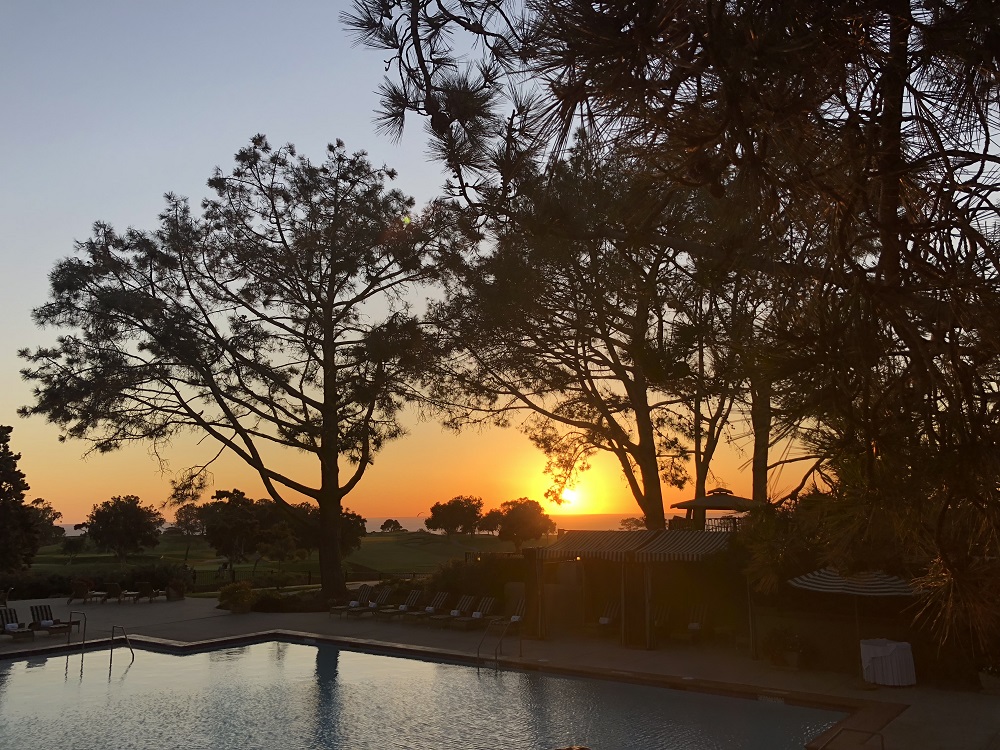