When it comes to queer nightlife in San Francisco, the choice for a social outing seems obvious: the Castro. With dozens of gay bars, drag shows every night of the week, and endless cruising potential, it’s not hard to find a good time in San Francisco’s historic gayborhood.

However, the City by the Bay has multiple vibrant, LGBTQ-friendly neighborhoods to explore and call your own.

Here are a handful of our favorites:

Just next door to the Castro District, you’ll find one of San Francisco’s largest and most lively neighborhoods, the Mission District.

Catch some rays of sunshine at the Gay Beach in Dolores Park, get inspired by the street art on Clarion Alley, or dance on the sidewalks of Valencia Street with the mariachis.

This historically Latino neighborhood is a world-renowned food destination, starting with simple Mexican fare. Every San Franciscan will tell you to try their favorite burrito place. The hard part is deciding which one. We love El Farolito for its carne asada, El Toro for its award-winning salsa, and Taqueria Vallarta for its al pastor.

And burritos are just the start. Walking around the Mission, you’ll find dozens of taquerias, street carts, and food trucks. If you’re looking for something unique, try Senor Sisig, a deliciously decadent fusion of Mexican and Filipino cuisines. If you want a complete departure from the traditional, we recommend reserving a seat at one of Bon Appetit’s top restaurants of 2022, Good Good Culture Club. This new, Hawaiian-inspired restaurant comes from the same team behind Liholiho Yacht Club, so you can expect culinary excellence.

When the sun sets, there’s a long list of highly-rated bars to check out. Most notably, The Mission is home to not one but two lesbian bars, El Rio and Jolene’s, among 21 left in the entire nation. On top of that, you’ll find a mostly queer crowd at Club Double D as well as the Make Out Room.

The neighborhood also plays host to a selection of independent theater companies. You can find new and exciting work at Z Space, ODC on Shotwell Street, and Ray of Light Theater inside the historic Victoria Theater on 16th Street. If you prefer a more substantial fourth wall, the Alamo Drafthouse, a restored art deco movie theater with table service, is a delight. The bar on the first floor is a great place to begin or end your evening.

This neighborhood south of Market, nestled between 3rd and 13th streets, home to legendary leather bars, is the rightful rendezvous spot for Folsom Street Fair. Once a primarily industrial district, SoMa has since been revitalized in the last few decades by San Francisco’s booming tech industry with thousands of sleek apartments and offices added to the skyline.

Easily accessible by BART, Muni, and Caltrain, it’s pretty straightforward traveling to SoMa from any part of the Bay Area. There’s a great mix of restaurants, cocktail lounges, breweries, coffee shops, and nightclubs sprinkled throughout the landscape of live/work lofts, hotels, and high-rise buildings.

Start your evening at Yerba Beuna Gardens, where you can take in the moving MLK memorial waterfall. Overlooking the garden across the street, the San Francisco Museum of Modern Art offers its visitors a permanent collection featuring Andy Warhol and Frida Kahlo, as well as a calendar of contemporary exhibitions.

When hunger strikes, there’s a plethora of options. Ethiopian? You got it. Burmese? Of course! Vietnamese, Mexican, Dim Sum, Hunan, Korean, Italian, Mediterranean, American, French, Indian – everything under the sun. You won’t go hungry in SoMa. If we had to pick, we love Rocco’s Cafe for its friendly service and delicious, generous portions. Or grab a table at Basil Canteen. Its happy hour usually attracts a younger, bubbly crowd.

For live entertainment, both Oasis and Asia SF offer first-class drag. For a nightcap after the show, pay a visit to Driftwood or Hole in the Wall. If you’re more of a night owl, SoMa has some of the hottest clubs in town. On Mondays, goths convene at Death Guild at DNA Lounge. On Wednesdays, fetishists flaunt what their momma gave them on the dance floor at the Cat Club. Thursdays, just next door, the crowd gets lively at F8. Any other night of the week, you can find a good time at Butter or 1015 Folsom.

Of course, no SoMa outing is complete without a stop at the legendary leather bars SF Eagle and Powerhouse. The Eagle was recently designated as a historical landmark, the first leather bar in the world to receive this status. A cornerstone of the Leather and LGBTQ Cultural District, The Eagle sports a killer outdoor patio that gets quite lively on the weekends.

If you walk north, uphill from SoMa, past City Hall—where same-sex couples travel from all over to be married—you’ll come across a vibrant stretch of shops, bars, and restaurants known to the locals as Polk Gulch. This compact queerborhood sees a lot of action on holidays, particularly around St. Patty’s, Halloween, and Christmas.

Polk Gulch is a foodie’s delight, home to iconic eateries such as House of Prime Rib, Shalimar, Bob’s Donuts, and Swan Oyster Depot (a favorite of Anthony Bourdain). Arguably the best bowl of ramen in town can be found in this neighborhood at Mensho, a Michelin-rated outpost on Geary Street.

It’s also not hard to find a stiff drink in Polk Gulch. Wine lovers flock to Amelie or Ora Wine Bar for their extensive wine lists. Fans of a proper cocktail love the old-school atmosphere at the Hi-Lo Club. For something a bit divey and risqué, stop by Kozy Kar. This ‘70s porno-themed bar has a few unconventional seating options, including an empty jacuzzi, a bisected RV camper, and a water bed.

For a classic gay night out, pay a visit to Cinch Saloon, one of the city’s oldest gay bars. The Cinch’s regulars love its no-nonsense drinks, live drag entertainment, and karaoke nights where happy crowds belt out the classics.

A stone’s throw from The Castro District, between the Duboce Triangle and picturesque Alamo Square Park, you’ll find the cosmopolitan neighborhood Hayes Valley. In recent years, Hayes Valley has been one of the most sought-after zip codes due to its proximity to Castro, a stretch of trendy boutiques, public art, and a high volume of instagrammable cocktail lounges.

Start your evening with a classic French dinner at Chez Maman. Then, take a balade along the tree-lined main drag to ANINA, a tropical cocktail lounge with a massive outdoor patio. If you have room for dessert, we love the espresso martini at Doppio Zero or a scoop of gourmet ice cream from Salt and Straw.

The Tenderloin, or the TL as the locals call it, is the unsung hero of nightlife in San Francisco. Home to the Great American Music Hall, The Regency Ballroom, and The Warfield, among other legendary venues, the Tenderloin has welcomed some of the music industry’s greatest artists over the decades.

Before the addition of San Francisco’s westernmost neighborhoods, the Tenderloin was at the center of it all, hence the name.

In recent years, as the neighborhood went through a period of transition, it adopted a second title: the Transgender District, to memorialize its place in queer history. This neighborhood boasts what is believed to be the largest documented population of transgender people in the world.

Walking through this hip, eclectic ‘hood, spotting the works of famous street artists around every corner, you can feel a powerful sense of agency in the air. As the site of the Compton Cafeteria Riots of 1966 and the city’s very first openly-gay bar, many people consider this section of San Francisco the first official “gayborhood” before the Castro District gained its distinction over time.

To feel some of this queer history come to life, go see the Hot Boxxx Girls at Aunt Charlie’s Lounge on Turk Street. This lively watering hole is known for its strong drinks and bawdy drag performances. If you’re feeling peckish, pull up a chair at Mikkeller, a tap room with a rotating selection of rare beers and delicious eats.

If you’re still not ready to call it, hang out with the late crowd at Nite Cap. What it may lack in frills, it more than makes up for with great service and a welcoming crowd. You may even spot an actor or two at the end of the night grabbing a drink after curtain call.

RELATED: Holiday shopping in San Francisco is about more than the perfect gift. It’s an experience. 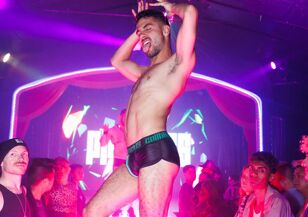 From burlesque to Broadway, San Francisco’s queer theater scene has it all 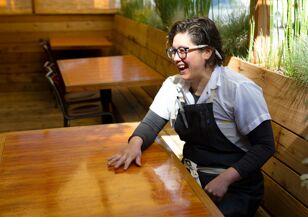 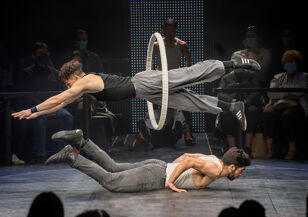