Can you hear the wedding bells?

They are especially melodic, as they are ringing from Vienna, known as the city of music. The central European country of Austria will welcome same-sex marriage equality Jan. 1, 2019. As its capital, one of the finest cities in all of Europe, Vienna is set to become the backdrop of unimaginably beautiful fairytale wedding ceremonies. Palaces! Cathedrals! Baroque and Gothic architecture!

With the help of some of Vienna’s most notable composers, we’ve put together a taste of what makes the city great, for anyone who wants to visit one of the most welcoming LGBTQ places on earth.

There is no better introduction to Vienna than a loop around the city on Ringstrasse, a road that encircles the old city center. Ringstrasse is a UNESCO World Heritage Site, with access to gardens, monuments, and jaw-dropping architecture of buildings like Parliament, City Hall, and Votive Church. A tram travels along Ringstrasse, but at just over 3 miles long (5.2 km), it can be managed by bicycle or walking, which provides opportunities to spend time at the smaller gardens and monuments along the way.

If it is art, it is not for all;
And if it is for all, it is not art.
– Arnold Schoenberg

Beyond the edifices along Ringstrasse, there are over 100 museums throughout Vienna with collections ranging from prehistoric artifacts to modern art, various palaces that display significant art collections, and historic homes open for tours. Kunsthistorisches and Naturhistorisches are as famous for their stunning facilities as they are for the collections within: Kunsthistorisches features art and artifacts from the past 5,000 years, with works by such notable artists as Raphael, Rembrandt, and Vermeer, and Naturhistorisches houses thousands of fossils, skeletons, and the largest collection of meteorites in the world.

But these are just at the beginning. Fans of contemporary art must visit the numerous art spaces in MuseumsQuartier, or stop by Secession to see the collection of experimental and modern art, including works by Austrian artist Gustav Klimt. Although Klimt’s most famous painting, “The Kiss,” is on display in Belvedere Palace, which was the summer home of Prince Eugene of Savoy, who is famous not only for his rumored gay love affairs but also for dressing in drag during high society functions.

It is difficult to comprehend the extent of Vienna’s history, cultural offerings, and LGBTQ life–so much to see, even standing outside and just looking at the buildings is an emotive experience.

The music is not in the notes,
but in the silence between.
– Wolfgang Amadeus Mozart

A symphony is no joke.
– Johannes Brahms

Vienna became known as a cultural capital of Europe in the late 1700s-early 1800s when the wealthy elite ruling class generously supported the arts. Writers, painters, and musical composers converged on the city to study, create, and be fabulous while hobnobbing with high society. Names like Beethoven, Mozart, Haydn, Schubert, and Strauss I, II and III are among a fraction of the Viennese composers who honed their craft at writing orchestral music in the city, turning Vienna into the Hollywood of orchestral music at the time.

This rich musical history lives on, with apartment-museums around the city that show where composers lived and display collections of composers’ mementos. Small orchestral ensembles perform Viennese classical music in churches, and tickets for those shows are sold in tourist kiosks around the city’s central squares. Local residents passionately support the Vienna Philharmonic or the Vienna State Opera, which are both regarded as among the best in the world. True classical music aficionados can even pay their respects at the solemn, beautiful Vienna Central Cemetary, where many of the Viennese composers are buried.

There is an artistry to the Viennese coffee experience, which over the centuries has become part of the national identity of Austria. Traditional Viennese coffee, called a melange, is served with hot foamed milk, and a side glass of water; but just as in American coffee shops, there are numerous combinations of beans, milk, and sweeteners with each creating having its own name.

One of the most beautiful coffee houses is also a mainstay of the local LGBTQ community: Café Savoy, near the popular outdoor Naschmarkt, is famous not only for its lovely decor but also its selection of delicious pastries. There is a small menu of savory food, and they sell alcoholic beverages as well, but save the serious drinking for the bars later.

Vienna is not just museums and culture; the city also knows how to throw an LGBTQ welcoming party and let loose with the best of them. The vibrant scene features numerous bars and clubs, including mainstream establishments that host LGBTQ nights. Vienna is also the birthplace of the waltz and is famous for its ball culture, social events that date back hundreds of years.

Life Ball is one of the largest HIV/AIDS fundraisers in the world with nearly 50,000 visitors attending the opening show at Vienna’s City Hall Square, and it flies in drag queens and performers from around the world to attend the events in formal regalia. In 2019, the theme is 1001 nights. After the opening, ticket holders head inside City Hall for a series of live events, including singers like Ricky Martin, drag queens such as Conchita Wurst and a star-studded fashion show.

And that’s not the only worldwide event coming to Vienna in 2019. In celebration of marriage equality in Austria, EuroPride 2019 will take place in Vienna, and the event is slated to be one of the largest events of any kind in human history. More on that to come!

For an insider’s look at Life Ball, and a fun look at the city, check out YouTube’s Kit and John as they tour Vienna:

For more info on Vienna, check out LGBT.Wien.Info or the GayCities guide to Vienna. 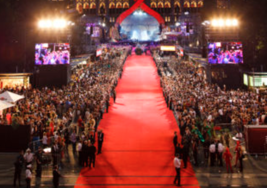