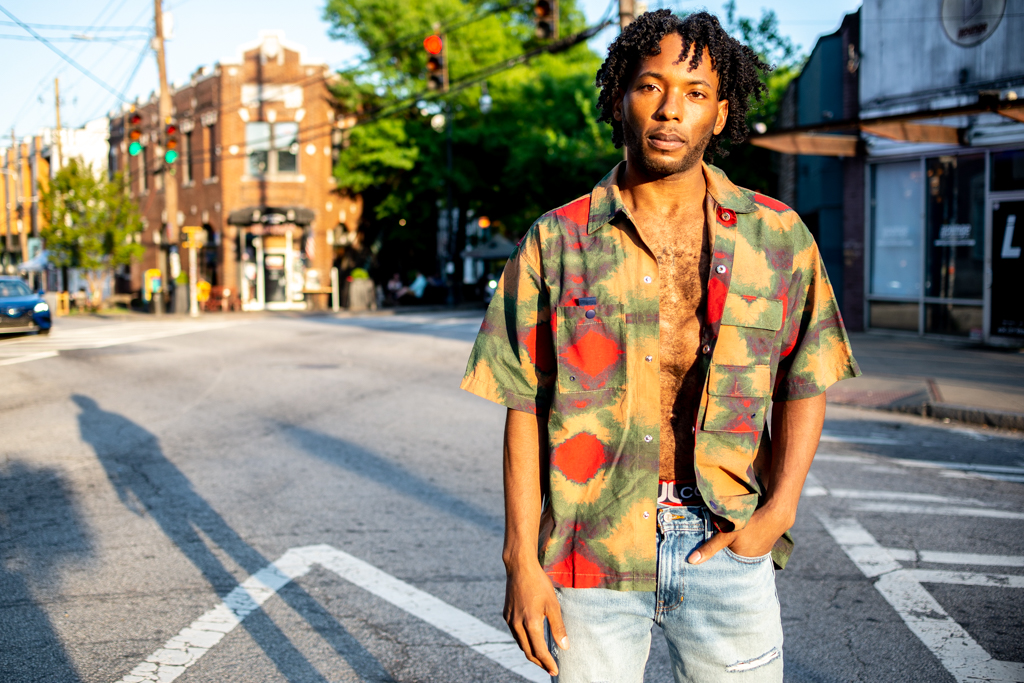 The latest documents a trip to Atlanta, Georgia.

Below, Liam shares exclusively with GayCities a selection of photos along with a bit of behind-the-scenes commentary about each. 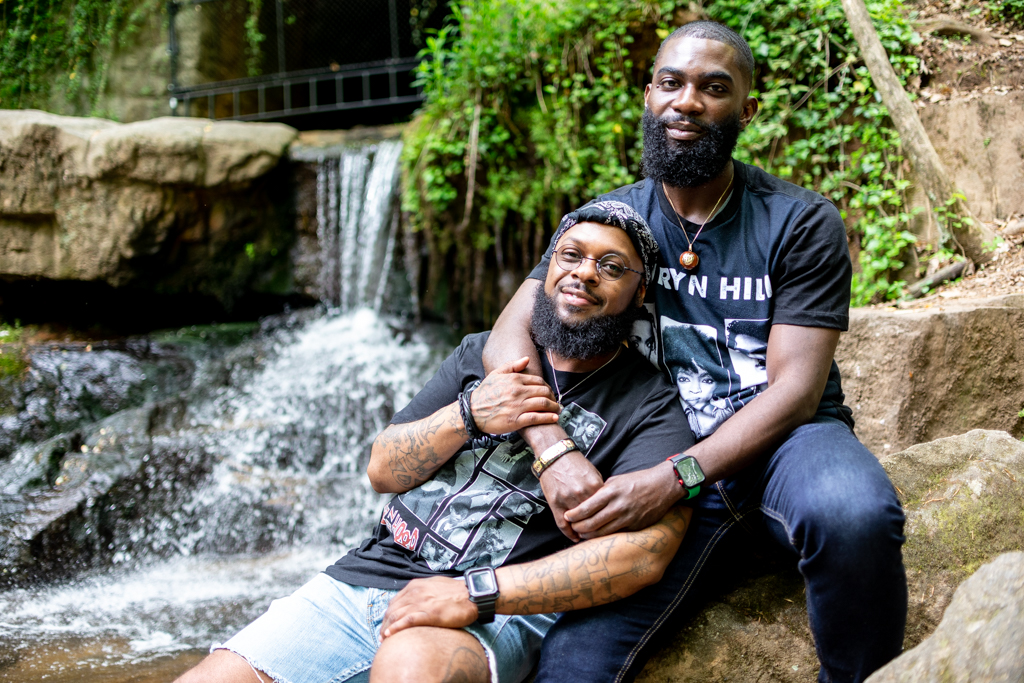 One of the first people to sign up for the Elska Atlanta shoots when we first announced the trip was Devlin J (on the right). I think what most interested him about it was the chance to put more of a queer spotlight on Atlanta, a city that had long been all over the news for the past year’s political events, like Stacey Abrams’s invigoration of the Black electorate, to Biden’s win in Georgia, to the election of two Democratic senators. Devlin described Atlanta to me as the Black Gay Capital of America and he was keen for more representation, and to be part of that representation. In a smaller way, I think he was also keen on having a nice photoshoot with his partner, TeeJ (on the left).

For the outdoor part of our photoshoot, Devlin chose to make Cascade Springs Nature Reserve the setting, a place where the couple often hung out, particularly in the early days of their relationship. As we walked around snapping photos, they were kissing, cuddling, holding hands… and there was no negativity or homophobia encountered from the other park-goers, of whom there were many.

In fact, at one point right after we shot this scene by the waterfall, two ladies passed by and asked, “Is this your engagement shoot? Congratulations!” There was a look of horror on Devlin’s face, and of embarrassment on TeeJ’s face, and they both responded with a very nervous laugh. Little did TeeJ know though, nor did I, that at the end of the second part of our photoshoot, the one at home, Devlin would get down on one knee and propose marriage. He said yes! 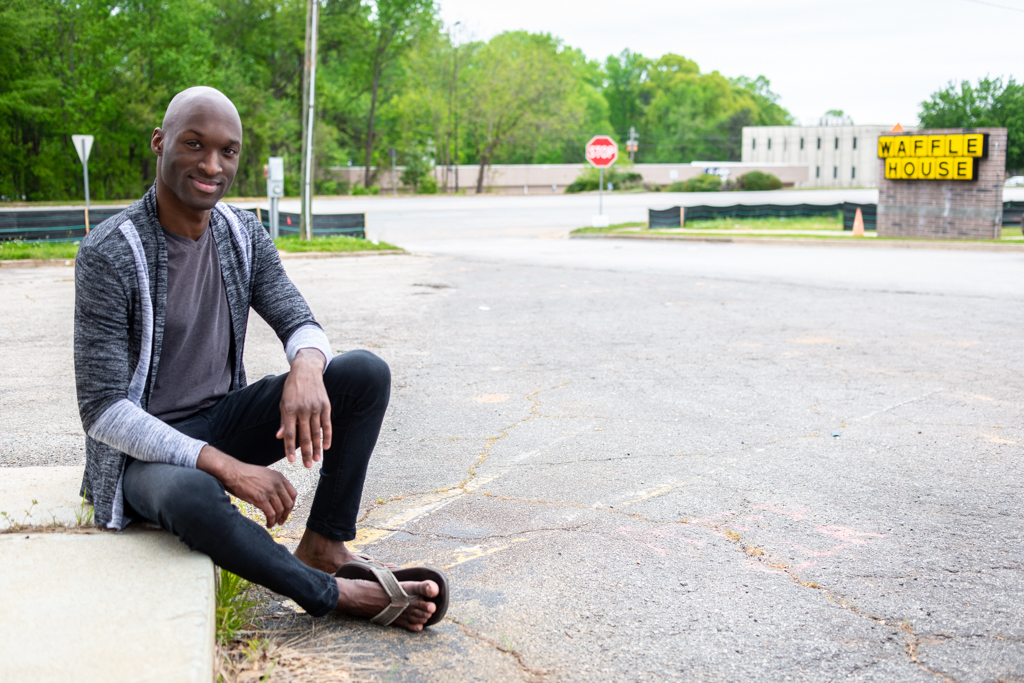 Apart from a couple of short connections at Atlanta’s massive airport, I’d never been to Georgia before. I had been to the Deep South though, and I have many memories of visiting Mississippi and Louisiana with my grandfather back when I was ten years old. Particularly strong in my memory was going to have breakfast at Waffle House with him. I even remember what he ordered – pork chop and eggs with a side of grits. When I arrived in Atlanta to shoot this Elska issue there were branches of Waffle House absolutely everywhere – I didn’t realize that it was an Atlanta-based chain.

Because of my personal connection, I had to find a way to include Waffle House in some way in the photography, and it was with Blaine that we got it done – he lived just a few minutes from the one shown here. After the photoshoot, I, of course, stopped by for a meal, and of course, I ordered the same thing my grandpa ordered years ago. Simple but tasty stuff. 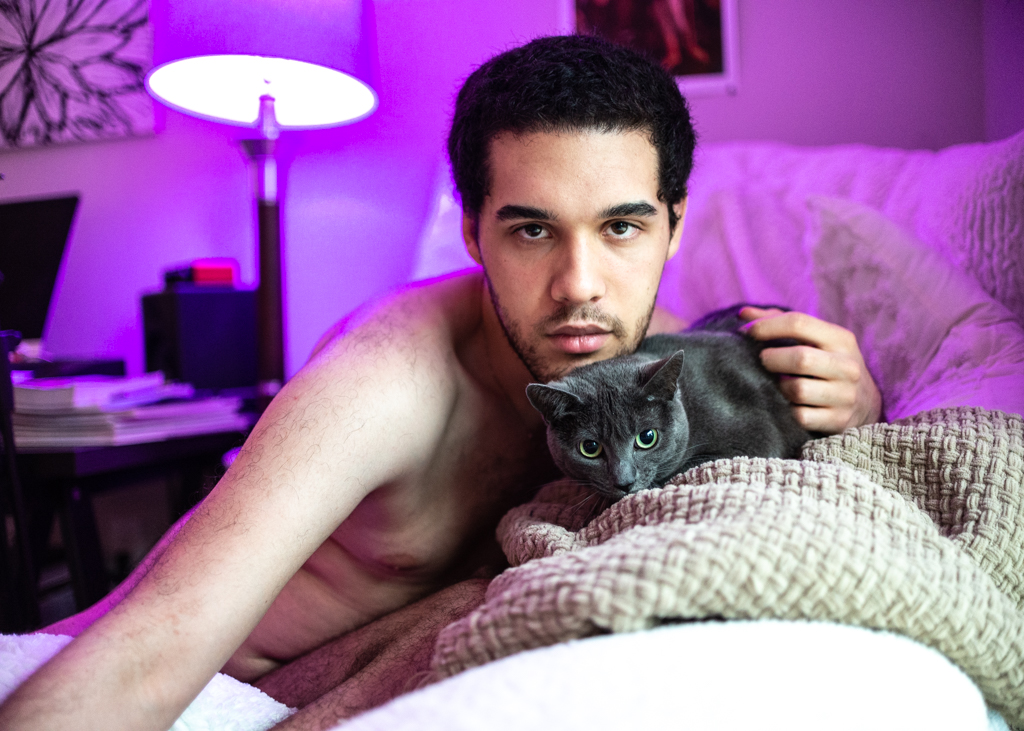 My first shoot in Atlanta was with Estafi, and it almost didn’t happen. I’d just arrived in the city after a long journey and expected to relax in my hotel for the evening. But the day before, I got a message from Estafi saying he’d finally decided that he did want to take part in the issue, having been too distracted by university exams to commit before. My shoot schedule was full though, apart from my arrival evening, so I just said that I’d probably be too tired, but I’d let him know.

When I got to the city though I was feeling excited to get started, so I messaged Estafi and was there within an hour. He ended up making for a great start to the trip. There was his bubbly, almost crazy personality – he talked constantly during the shoot and I was too busy concentrating on the camera to remember any of it, apart from a vague story about Adele. But his expressiveness sure made for some fun photos. And then there was his openness to do anything, such as to shoot alongside his Miss Piggy paraphernalia (it turns out that the Muppets are huge in Atlanta, perhaps due to the World Puppetry Museum here). He also was willing to shoot with his exceptionally pretty cat. This cat though was less willing, but she tried her best. 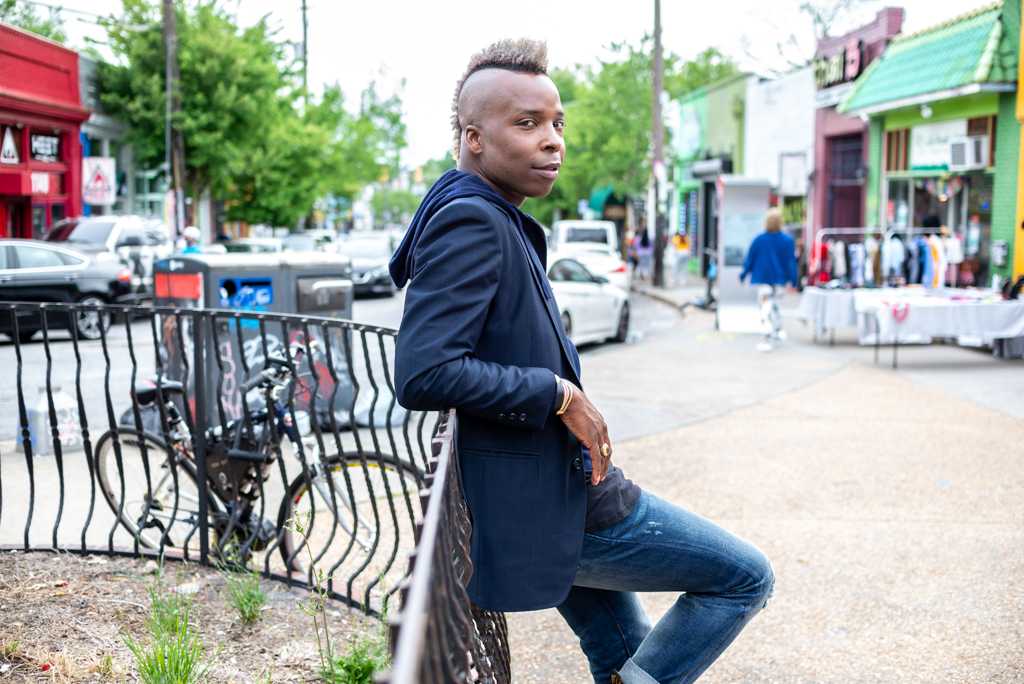 I’ve been making Elska Magazine now for six years, which translates to thirty-four different cities and almost six hundred men photographed. Yet even though I’ve been all around the world, there are moments when you notice just how small this planet is, like I did with Orlando. He became the first guy I ever photographed twice for Elska.

I met him originally in London back in 2016. He’d heard about Elska and rather forcefully roped me into shooting him even though I had no plans to make a London issue. He was very persuasive, and so I ended up shooting him and then printing the photos and the story he wrote as a sort of bonus chapter in our Elska Toronto issue. After that, things went quiet and I didn’t hear from Orlando again until 2021 when I announced our shoot trip to Atlanta.

As it turned out, he’d moved out of London because of the pandemic and ended up back home in Atlanta. He got in touch to say that he needed to be in the Atlanta issue, and although at first I wasn’t sure if I should shoot the same guy a second time, he was again good at persuading me. “This time I’ll go fully nude for the shoot”, he said, trying his best to convince me. And it worked! His 2016 shoot was rather demure so at least this new shoot would be different enough that it would make sense to feature him a second time. 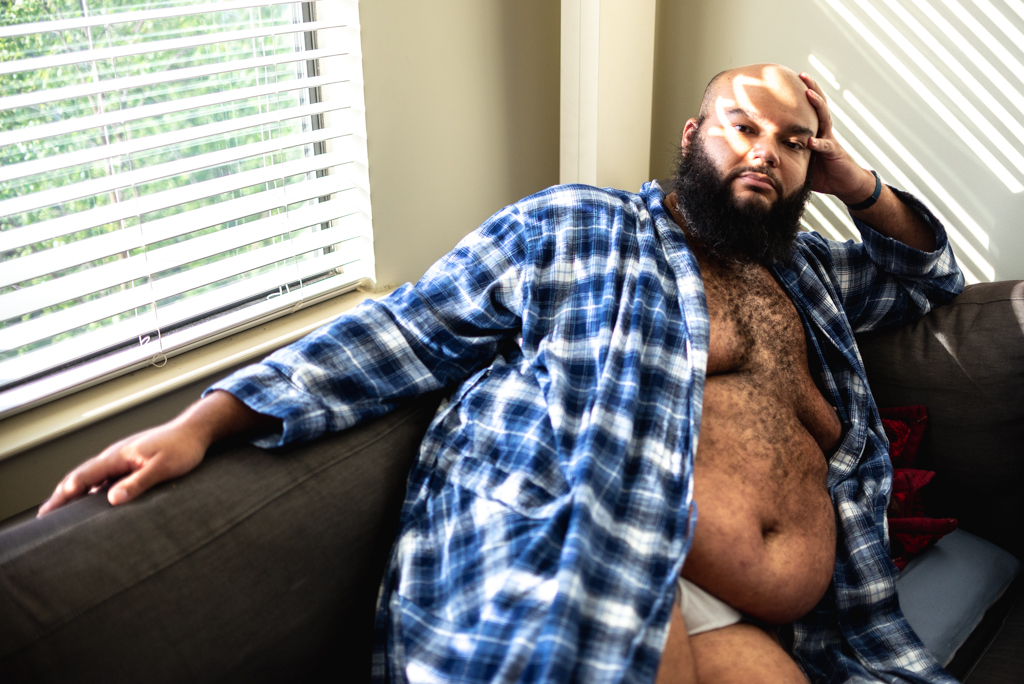 I had just finished another photoshoot and decided to go back to my hotel for a quick bit of editing before my next shoot. I hate working in silence though, so I turned on the TV and tuned it to CNN, the Atlanta-based broadcaster which I thought would offer pleasantly repetitive background noise. But to my bewilderment, the ticker at the bottom of the screen said, “Derek Chauvin verdict to be announced with the hour.” I went flush and numb, gluing my eyes to the screen.

No one expected the verdict to have come in so quickly, everyone thought it would be another week at least. I messaged the next guy I was to shoot, Eric, and asked how he was feeling. I would need to leave soon for our shoot, but I didn’t want to miss anything, and the feeling of dread I had made me simply not in the mood. I told this to Eric, and his response was one of despondence. Based on a lifetime of witnessing injustice against people of color, in a world where BLM was born due to the fact that clearly Black lives did not matter to the majority of the population, he told me that he was sure Chauvin would be declared not guilty. So I packed up my camera and got ready to leave and join Eric in his hopelessness.

But then just as I was about to press the off button on the remote, the screen said, “Derek Chauvin guilty on all three charges in the death of George Floyd.” I left my room ecstatic and fully expected the streets to be full of honking cars and shouts of joy. But the mood was normal. Maybe this wasn’t the turning point that I assumed, maybe it was just an anomaly; the people of Atlanta were certainly not willing to say game over, they remained resolute in the struggle to convince the world that Black lives do matter. 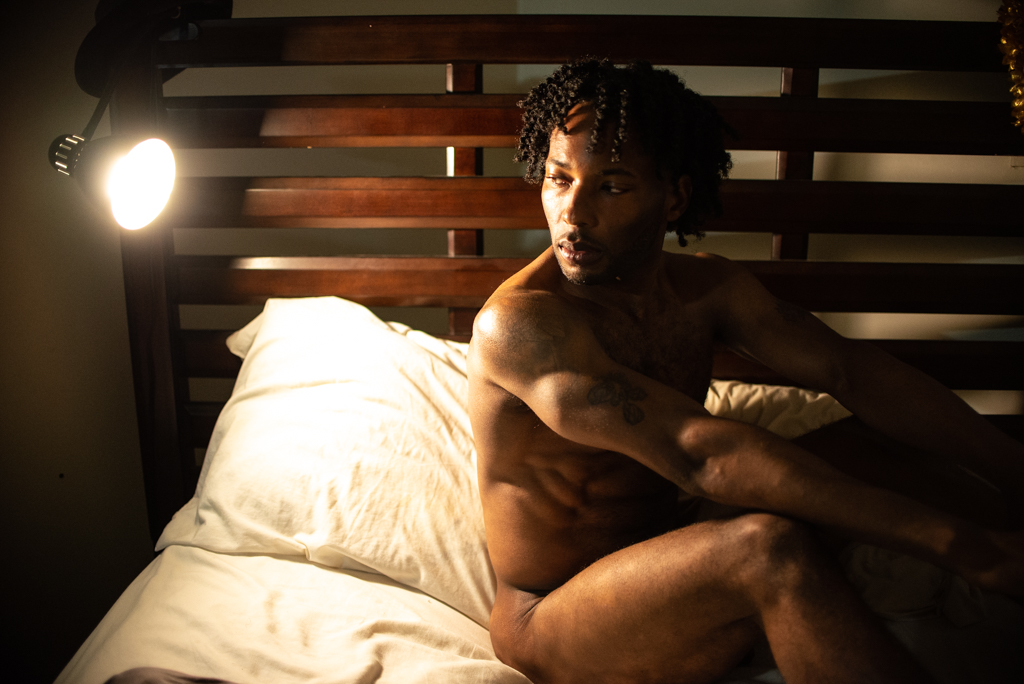 My last day in Atlanta was a joyous one, and that’s in no small part due to Ivan. First of all, he chose for his outdoor location one of the coolest neighborhoods in the city, East Atlanta Village. His effervescent personality really lifted my spirits. I don’t recall ever meeting someone so excited to do a photoshoot. And so prepared. I remember that when I got to his place to meet him, I found that his living room was a disaster area, with clothes strewn all over the sofa, the coffee table, and a bit on the floor as well. And when I looked closely, I could see that many of them still had their tags on – Ivan had gone shopping just for this shoot. That’s the sort of trick that real models do, especially if they return them after the photoshoot! I recall when I was doing fashion photography in London there would be queues a mile long at Topshop on a Monday morning for returns by models, students, Instagrammers, etc.

Shooting him at home was easy and relaxed, and shooting him outside was a blast. Rather than nervous like most guys I shoot for Elska, he reveled in the attention from passersby. He wasn’t distracted when a fair few cars drove past and whistled at him, especially later in the shoot when he opened his shirt in the middle of a busy intersection. My only regret with Ivan was that I didn’t take the hint and invite him to dinner after the shoot, he kept suggesting how much he wanted to indulge in a pizza. Ivan was a fab way to end my trip to Atlanta, but dinner together would have been even better. 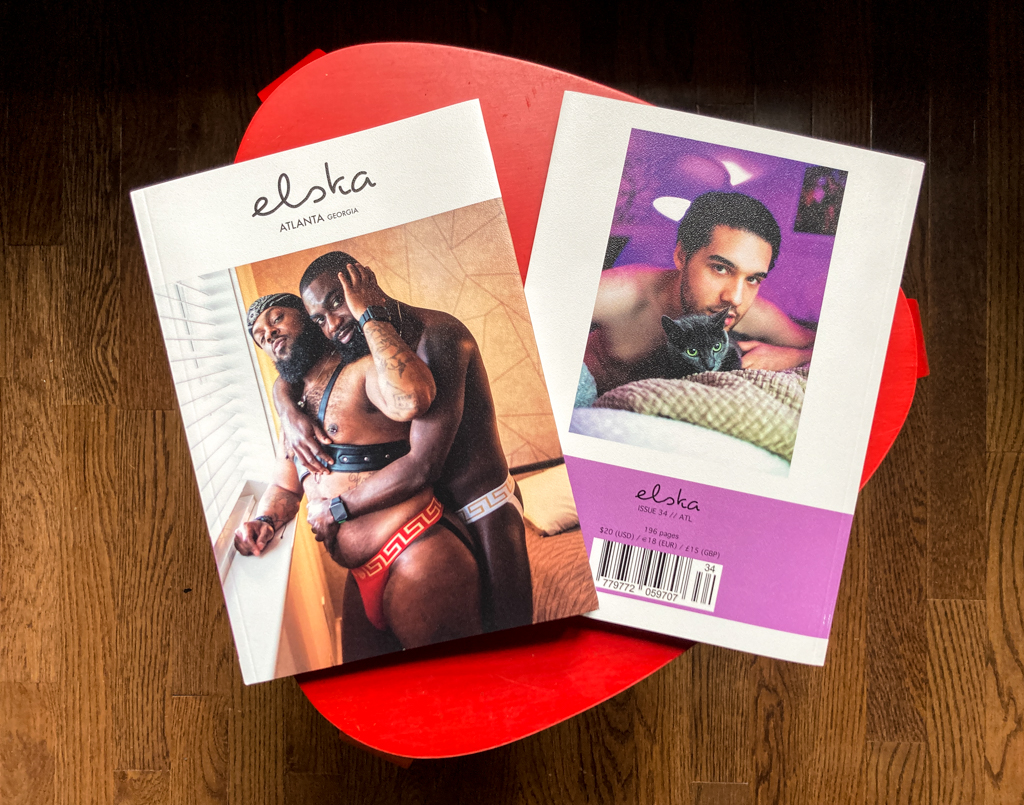 Elska Atlanta is out now in a limited edition print version and in an e-version. A companion zine Elska Ekstra Atlanta is also available with outtakes, behind-the-scenes tales, and four more guys for whom there weren’t enough pages in the main print mag.