“All young people, regardless of sexual orientation or identity, deserve a safe and supportive environment in which to achieve their full potential”. #HarveyMilk 🏳️‍🌈 #HarveyMilkDay #TheCastro #HarveyMilkPlaza #SanFrancisco #California #tbt

Following a failed attempt in the mid-1970s, Milk was elected to the San Francisco board of supervisors in 1978. He was affectionately dubbed “the Mayor of Castro Street” both because of his power and his charming, ubiquitous presence there. During his 11 months in office, he sponsored a bill banning anti-gay discrimination in public accommodation, housing and employment.

He also became a figurehead for gay rights across the US.

In November 1978, another supervisor, a conservative named Dan White, assassinated both Milk and the then-mayor, George Moscone, in the San Francisco City Hall. Milk’s life was recalled in the 2008 Oscar-winning movie, Milk, with Sean Penn playing the titular role.

Milk’s legacy has not diminished since his death and his legacy in San Francisco is celebrated in several ways.

The Castro Muni Metro station was opened in 1980, and its associated transit plaza was renamed in 1985. You can’t miss it: A giant rainbow flag flies above it and can be seen from far afield.

Earlier this year, the city awarded a grant of $1million to the Friends of Harvey Milk Plaza to help finalize a redesign of the plaza, to make it more of a public space where locals and visitors can learn about the history of the area and about Milk himself.

The camera store that Milk ran in the 1970s is now occupied HRC (Human Rights Campaign), which sells merchandise to help it continue its work in fighting for equal rights for all LGBTQ people. In front of the store is a bronze plate that covers Milk’s ashes. 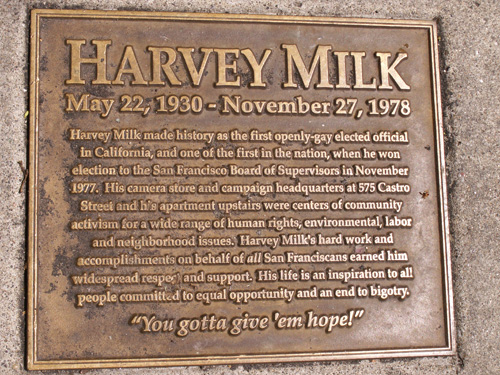 Last year, San Francisco Airport reopened its refurbished Terminal 1 and renamed it the Harvey Milk Terminal 1. It handles domestic flights from within the US. In March, the terminal unveiled a permanent display highlighting images from Milk’s life.

You’ll also find a mural of Milk near 18th and Castro street. It was created by artist Oz Montania.

Away from his home city, the US Navy has renamed a ship after Milk, and he’s been the subject of biographies, a children’s book, and even a musical. In 2009, President Barack Obama posthumously awarded Milk the Presidential Medal of Freedom for his contribution to the gay rights movement. In 2014, the US Postal Service issued a stamp honoring Milk.