There are two things that are guaranteed when Billy Porter takes to the stage. He will have the crowd on their feet, cheering. And he will look smashing.

Porter delivered one of his barnburner speeches last weekend, as the headliner at the Black Tie Dinner in Dallas, Tx., where he addressed several thousand attendees at the event. The Black Tie Dinner is the largest fundraising gala in the U.S. that supports social and political organizations that serve gay and trans communities. 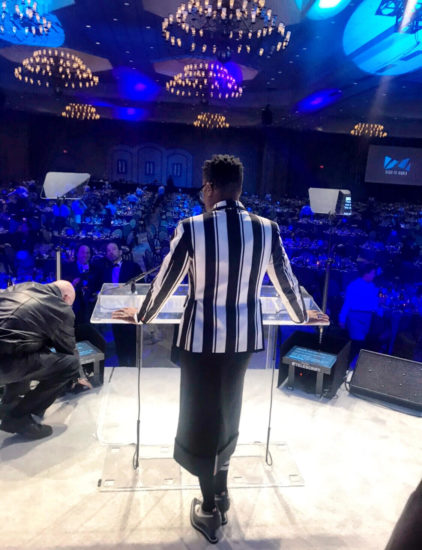 Porter sauntered to the podium in his interpretation of formal black tie regalia—”dripping in Thom Browne, bitch,” his words—and told the crowd that he “has been at a loss since the 2016 election,” and the current state of U.S. politics has left him “filled with rage of a velociraptor.” He sounded an inspirational battlecry to the crowd, encourging attendees to fight against social oppression and political malfeasance that currently plagues American society.

“No, we will not shut up, we will continue to speak truth to power, we will call out corruption, and we will fight till our last breath for what I know is right,” he said, to much applause.

Porter also shared stories of his youth, when he was sent to therapy because his mother thought his behavior was too effeminate, and he was “banished” by his church. While a university student, his theater department put him on probation because a professor thought his voice was “too high.”

When he was attacked and beaten in the street by six men, as he walked home from dance class, he said his neighbors just stood by and watched. “Not a single person stepped up to save me,” he said. “So I took it upon myself to save myself.”

Related: Billy Porter opens up about how homophobia almost ruined his career

He finally achieved his current success, including a recent Emmy win for his work in the FX series Pose, when he stopped censoring his own behavior, and he told the audience, “It’s time to use our powers of authenticity.”

And of course he sang some bits of a couple of songs, because he is Billy Porter. The speech is approximately 20 minutes long, Watch the video on the Black Tie Dinner Facebook page.

The Black Tie Dinner has raised over $23 million for organizations like HRC, Lambda Legal, and numerous services throughout Texas. The 2019 event included Lance Bass, LeeAnne Locken from The Real Housewives of Dallas, and Porter’s fellow Pose castmember, Dyllón Burnside.