Among the Black Pride celebrations that occur across the county, Atlanta has long reigned as the informal national champion each year, and organizers are pulling out all stops in 2019 to defend the crown.

The name “Atlanta Black Pride” informally includes a collection of numerous events for gay, lesbian, and trans people throughout Labor Day Weekend, although most of them are not affiliated with each other. There is a long history of groups vying to be the “official” Black Pride sponsor, although black queer folks have been gathering in Atlanta’s Piedmont Park for Labor Day weekend since at least the 1960s.

Now one of the largest events—the Pure Heat Community Festival on Sunday, Sept. 1—connects the current celebrations with those organic beginnings by bringing together thousands of pride attendees to the park. Pure Heat adds a fun festival atmosphere to a weekend dominated by late-parties, and attracts families, vendors, and a line-up of great musical artists (Cardi B performed at Pure Heat in 2017).

The Sunday festival in Piedmont Park also hosts a legendary J-sette competition, with teams of young men in glittering two-piece bikinis (reality-TV fans will know the famous J-setters the Prancing Elites) doing battle on stage, and while strolling throughout the park.

Pure Heat is a must-attend for anyone looking to add a sense of community and fellowship to a weekend of club-hopping, and is one of the few entertainment offerings at Atlanta Black Pride that does not come at a cost.

As the number of promoters hosting parties has grown into the dozens, the weekend has become infamous for inflated cover charges, with prices rising throughout the night and the promised celebrities doing little more than waving at the crowd from the VIP section. Expect to pay at least $20 for general admission to any club if you arrive within the first hour, and it’s not uncommon for that price to double by 1 a.m.

With so many promoters vying for your money, it’s tough to know where to spend it. Generally speaking, each night is dominated by one massive party (RT Productions on Friday, Rockstars on Saturday), although lots of promoters host events all weekend.

The parties kick into high gear on Friday night: RT Productions kicks off the weekend with its annual block party at MIXX on August 30. The organization ATL Black Pride hosts “ATLChella” at Midtown Collective that same night.

For anyone in search of the essential Atlanta Black Pride experience—a warehouse filled with more than 5,000 partygoers—Rockstars Productions and New Level Events host their marquee party at the Georgia Freight Depot on Saturday, August 31. The gigantic gathering will feature an appearance by hip-hop diva Saweetie (photo above), who’s heated up the summer with her lustful hit, “My Type.”

Big crowds aren’t your thing? Atlanta Black Pride officially kicks off with an Aug. 28 reception at Atlanta City Hall, with Mayor Keisha Lance Bottoms. Some promoters advertise this event as “invite only,” but you just have to register for a ticket.

There are also two sip-and-paint sessions with nude male models—where you can drink wine and stare at a gorgeous naked man, while you paint his portrait—as well as shows with comedy, poetry, jazz, and political speakers. The list of events goes on and on.

There are two separate host hotels within a half-mile of each other, the Georgian Terrace and the Georgia Tech Hotel & Conference Center, and both will be a hub for visitors to learn about each day’s itinerary, with info about “official” events and other goings-on.

However you’re looking to fill your pride weekend in Atlanta, organizers are ready to stuff your schedule. With so many different options, spend some time at the common gathering spaces such as the host hotels and Piedmont Park to find out what matches your vibe. 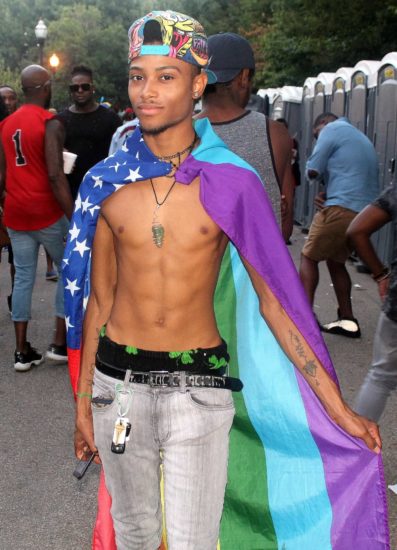