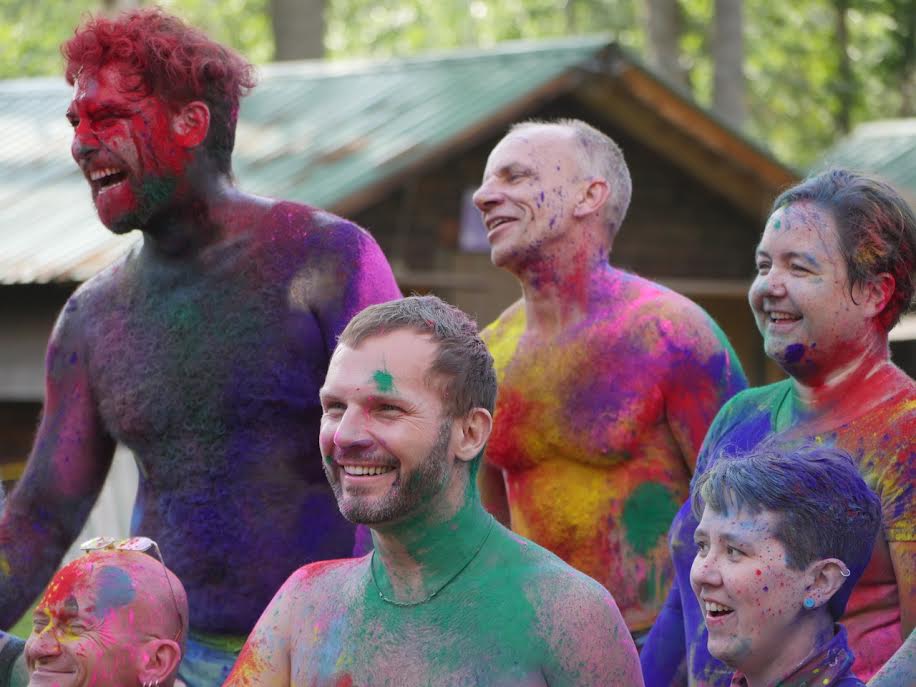 Somewhere beyond pulsating Castro District nightlife and maneuvering your way through strollers in Tomorrowland is an oasis so damn queer you’ll wonder how you’ve managed without it for so long.

Now entering its twenty-third year, ‘Camp’ Camp is an adult LGBTQ sleepaway destination set in southwest Maine. Every August, folks from around the globe come out for a week of traditional summer camp fun with a gay twist.

Curiously skeptical newbies arrive to Camp coyly navigating the group of more than 200 lesbians, gays, bisexual, transgender, gender non-conforming–plus allies. While veteran campers–some of whom have attended for nearly two decades–laugh and embrace Camp family both new and old.

“People come here to experience community versus to find a date or to drink, though there’s a little bit of all that that goes on,” Orr tells GayCities. “I want [campers] to know that this is a safe space that we work hard at creating.”

The food is first rate, and the accommodations camp basic. The comfy bunk beds will take you back, and reading love notes etched into the wooden bed frame does feel nostalgic. And the cabins–named after iconic figures like Harvey Milk, Ellen DeGeneres, Sappho, and Oscar Wilde–get glam makeovers with Christmas lights, tinsel, and colorful fabrics.

On the final night, Dance Dance is the kind of scene every gayborhood deserves: lesbians dancing with gays, younger folks mingling with older folks, and a genuinely positive energy permeating the group. Just as the last dance signifies an end to another year at Camp, it’s a near guarantee of the beginning of life-long friendships.

According to the ‘Camp’ Camp website, about 75 percent of people who come to Camp return for at least one more year. And while most campers arrive from New England and the East Coast, many campers travel cross-country and even across oceans to get their gay-camp fix.

“I’ve never had more fun or felt more close to so many people in one place at one time as at Camp,” said Camp veteran Cheryl Schaffer, who has attended for the past 20 years.

As the Trump administration takes active steps towards making America unsafe to be gay again, spaces like ‘Camp’ Camp are all the more necessary — especially in Maine.

Earlier this month, Republican Maine Senator Susan Collins defended the nomination of Judge Brett Kavanaugh. And in July, Republican Maine Governor Paul LePage became the first in the country to veto a ban on conversion therapy.

However, in the land of ‘Camp’ Camp, having a gay ol’ time is the only objective.

“[I enjoy seeing] the excitement of others when they realize they can play like a child, laugh, stretch their limits, challenge themselves to swim across the lake or jump off a high point of the ropes course,” said Schaffer.

“Camp is not an intense party scene. It’s for people who like the outdoors and like to have fun; it doesn’t matter what age you are,” Schaffer continued. “For me it’s not about going to the activities because I’ve done them all. For me it’s about sitting on the waterfront with friends, laughing while trying to get someone to fall off their floaty.”

Travel vlogger and first-time camper Josh Rimer from Vancouver said ‘Camp’ Camp is “the friendliest thing [he’s] ever been to,” adding that he was surprised at how easy it was getting along with everyone.

“[We were] so open to talking and hanging out and doing activities together,” Rimer added. “It didn’t matter what we looked like, where we were from, what we do for a living; we were all just here celebrating being queer.”