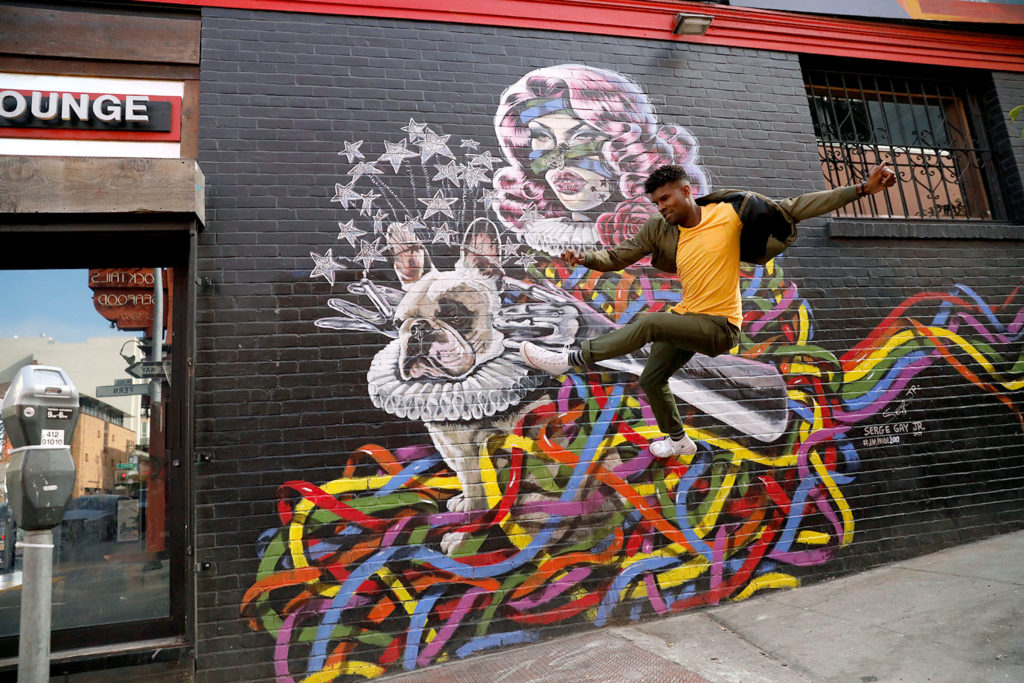 It was love at first sight, but with a twist.

At the age of 22, Serge Gay Jr. arrived in San Francisco to attend an art conference. Raised in New York and Miami, he had never been to the West Coast. Like many visitors, he was barely off the plane before he decided the city was home. The mild weather, the views, the art community, the food, and the progressive sexual attitudes convinced him that this was the place to spend the rest of his life.

In the ensuing decade, Gay Jr. has established himself as one of the city’s most important African-American painters and muralists. This year, he found the man he loves in the city he loves. He married his partner, Michael, at City Hall, further cementing San Francisco as home.

GayCities asked Serge to take us on a tour of the City by the Bay with stops at a few of his favorite spots, several showcasing his own murals. Starting at Art Attack gallery in the Castro, we weaved our way through an amazing array of attractions, from Twin Peaks Lounge in the Castro to a Moroccan restaurant in the Mission, to a Polk Street alley mural, finishing up the day by enjoying an Old Fashioned at a swanky lounge and restaurant in North Beach.

What follows is Serge’s narrative of the day, told in the first person, with commentary on the city, his art, and his life.

Down the Rabbit Hole

Walking on Market Street in the Castro one day, I noticed this beautiful space Art Attack, so I sent samples of my work. This is my ‘hood, and there’s a lot more local buzz around here. When I show near Union Square, it’s more about visitors than locals. That’s great but the story I’m telling tends to be more about the queer experience in the city, so the location fits me as a person and artist living in the neighborhood.

I’m trying to showcase the people and the causes that are underrepresented in art. As a black gay artist, I’m conveying the beauty of the black gay experience. I want to cast light on outcasts, whether it’s women who are denigrated or immigrants cast aside; things close to me and my life, things that tend to be untold. These are the subjects that are dear to my heart and more than just a pretty picture.

When I moved to San Francisco, I found my home among other outcasts and misfits who had come together to carve out a space to be themselves. I had hints of my identity, but I didn’t really know who I was. I remember thinking, “This is where I can finally feel free to be myself, where I belong.” This is a city based on an idea: what would it be like if everyone could just be themselves?

At the time, I was in art school in Detroit, where I was on the verge of taking a job in Los Angeles or New York. I flew out here for an art conference, knowing nothing of the place but what I’d read. I fell in love with it at first sight. Miami will always be a big part of my influence, having grown up in a family from Haiti and with a lot of people from the Caribbean. But somehow, it never felt as groundbreaking as San Francisco. Here we mix not just racial identity, but gender and sexuality as well for a really rich combination. This was the inclusive community where I could learn to love myself for who I am and befriend the people who would help me find my true voice.

It wasn’t until I met Michael in 2007 that I fully figured out my sexuality. I knew I was different, but I felt I couldn’t be sure until I fell in love with someone for the first time, and I had no idea who I’d fall in love with. Michael was everything I wanted in a person. My mom had asked me before I met him if I was gay – she kind of suspected I was – and I just replied, “Mom, I don’t even know.” Then I called and told her I was bringing home Michael, and she was like, “Oh, okay.” She was waiting for me to be okay with myself. And I was waiting to figure it out.

Making a living as an artist is a constant struggle. There are so many ups and downs. I’ve had to juggle multiple projects, from graphic design to gallery shows to murals, events, even film and music video, to actually get by. It’s a lot, but these are the things I have to do to pay the bills so I can spend time on the thing I love most: painting.

Down the Rabbit Hole is really about not wanting to be a toy for a guy with a checklist of fetishes, but to be seen as a person who has needs and likes himself. So I came up with the idea of painting myself at Twin Peaks having a drink, while patrons look and sort of objectify me, as I sit by myself. As a community, we are still so young, still evolving, still finding our way in the world. We are developing our moral standards along the way, and sometimes we still harm or hurt each other. The painting is saying that this is something we are still figuring out but we are not there quite yet.

Twin Peaks Lounge is monumental to me. It’s got so much history, being one of the first gay bars in the city with windows that open onto the street for all to see. You can sit in a lounge setting, drink and relax and not have to deal with the standing-room-only hustle and bustle of other bars. It’s my spot to get a hot toddy when it’s cold outside, and my pit stop on my way out at night. I love that it smells like cookies from the bakery Hot Cookie next door.

I first really noticed the beauty of the Castro Theater when Milk was being filmed there, as I was just moving to the city. I quickly discovered the Frameline Film Festival. I started volunteering so I could get into the theater and enjoy a great movie in the midst of Art Deco heaven, for free.

Marcello’s Pizza right across the street is a great place to refuel before a movie or as you make the rounds of the Castro bars. There are not so many places left that sell pizza by the slice, and the staff there are so friendly and the quality of pizza is so consistently good. You always run into people from around the ‘hood. It’s easy to underestimate how important it is to get some delicious fuel when you are running around the city.

My friend Waleed and his partner created Khamsa, a fantastic Moroccan restaurant on South Van Ness Avenue. He asked me to do a mural for the new space, and I just couldn’t say no. They were nice enough to let my husband and I take it over on our wedding night after we got married at City Hall, not far away.

This place is just another example of how amazing the city is. The owners, my friends, introduced me to this whole underground East African and Middle Eastern gay party scene. It just blows my mind that these guys find a way to connect with each other here in a way they could not almost anywhere else in the world; this whole flourishing community of people who were not accepted back home but feel loved in San Francisco. And here they were inviting me to share their food, their community and to create something that underscored that sharing in a mural. How could I say no?

When I moved here in 2008, I started going to Booty Call at QBar, which was the coolest party at the time. I didn’t have any friends, but this is where I met Brandon, one of Juanita’s boys who ran her photo booth in the back. I was just fascinated with Juanita and all the characters that Booty Call drew in every week. So I showed Juanita a drawing I did of some of these people I met at her parties and she asked me to do the Booty Call t-shirt, which was then mass produced. Years later, she wanted to do murals for Pride 2017. I got the assignment for the exterior wall of Lush Lounge on an alley in the Tenderloin. She wanted to bring gay art back into the Tenderloin, where she lives and feels strongly about preserving the gay history of Polk Street.

I’d heard about a glamorous restaurant and lounge in the Financial District that needed a mural over the bar. I met with the owners, and we hit it off. It just so happened that I was working on a series with tropical Haitian leaf patterns, and that’s exactly what they were looking for. They wanted their logo, the Transamerica Tower (located just blocks away), to be incorporated into the mural. So I imagined the murals as a movie like “King Kong” and the Empire State Building, towering over the park below, which contains a Redwood forest.

Somehow, I’m known for painting lips, and now it has become a famous spot for people to take pics, kissing. A kissing booth, if you will.

Really, now how San Francisco is that?

You can see Serge Gay Jr.’s solo show online at Art Attack and in the gallery starting February 7.

All photos by James Chiang.