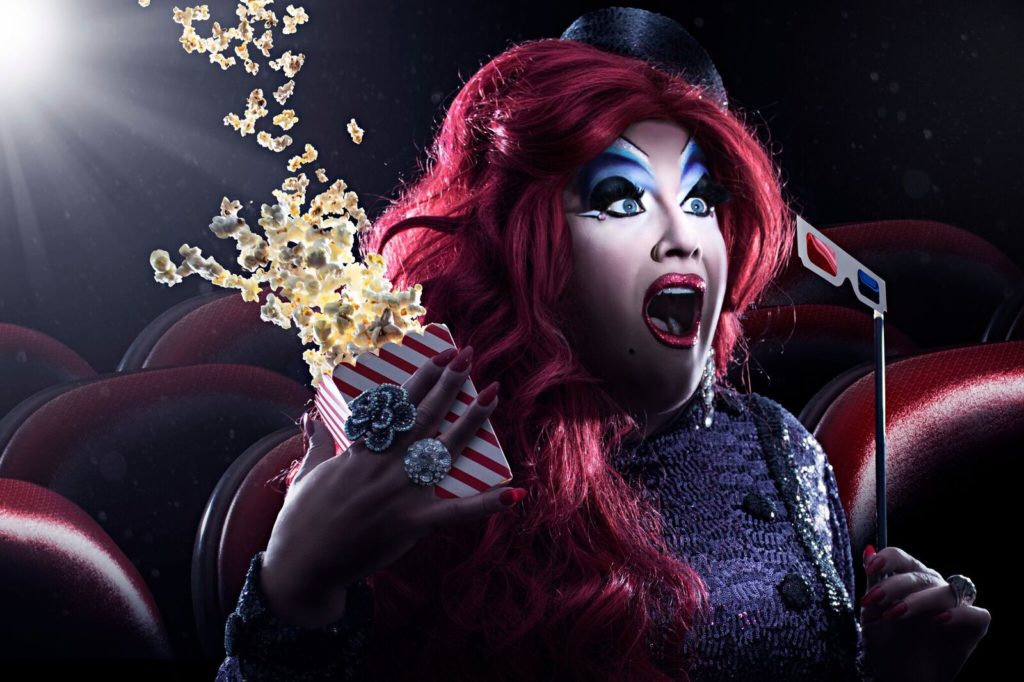 Peaches Christ is an only-in-San Francisco treasure. The drag queen, filmmaker, and actor, aka Joshua Grannell, is a force in the city’s nightlife.  She’s been producing Midnight Mass at Castro Theater, a show with which she later toured the country with, since 1998.

Today, she’s working on Steel Dragnolias for the theater. This fall, she will produce her most ambitious work yet, Into The Dark:  Terror Vault, at the San Francisco Mint near Union Square.

But Peaches, 44, wasn’t always all this. It was back in the 1990s, while a student at conservative Penn State University, that she developed the Peaches Christ character, almost by accident, for which she would become known in the capital of drag.

Peaches took time from her busy event schedule to chat with Queerty about her dramatic childhood, her idol John Waters, and why San Francisco is a uniquely liberating place where nightlife flourishes for all.

Tell us about your college movie, Jizzmopper: A Love Story.

How did you end up in San Francisco?

Growing up in Maryland, John Waters was my idol. And I got a chance to meet him. I had read his book, Shock Value. After college, I told him I had no intention of moving back to Maryland, and that it had to be New York or Los Angeles. He said, Have you considered SF?, and told me a bit about the Cockettes, the hippie communes, midnight theater and drag troupes. I watched the PBS version of Armistead Maupin’s Tales of the City, starring Laura Linney, and I was sold. It had to be SF.

What was different about the SF drag scene?

There were the Cockettes here as far back as the late ’60s, and it was a very modern scene. There was bearded drag, and it was no barrier for cis women to join the scene for decades. These were all normal components of the Imperial Court scene, for instance. Of course, there was the Sisters of Perpetual Indulgence as well. Trannyshack was really happening in the ’90s. There was no debate about who was included in drag. Everyone was included.

What makes San Francisco such a welcoming city to outsiders?

The city began as a place where people went to reinvent themselves. It’s the destination people head toward when they are running away from their lives, whether it’s boredom, homophobia or just the lack of acceptance of middle America. Even before hippies came to town, people were drawn to it as a place to experience their true identity.

A good part of the original gay settlers were military guys coming back from the Pacific after World War II. They had realized they were gay or had fallen in love or just realized they could not re-acclimate to their lives back home. So they just never got back on the train back home, where they couldn’t be honest about who they were or where it was a whispered kind of thing.

How did your Catholic parents in Maryland deal with your young interest in cross-dressing?

I was blessed. My father was frustrated I was not interested in girls or sports, but I was never shamed for it. In elementary school, I created an elaborate haunted house. My father taught me how to make it a business, and Mom helped me create the costumes — it became a family thing. Mom would sell tickets, and Dad would get out the chainsaw and help me build the set. I was a little dictator of creativity, and I just thought, Of course, they will support me. I was very lucky to have the parents I did. In this Catholic community, it was more the norm to get thrown out of the house or rejected.

Things got easier in college?

People were horrified by drag at Penn State. It was still a hidden something that happened at private parties or maybe at a club once in a while. I was naive about how my show would be received when I was there. But it was there that I met John Waters, who came to campus as part of an author series. He was one of the great living filmmakers, along with David Lynch and Pedro Almodóvar. So a lot of people who were antigay or aghast at drag were OK with John being there.

Tell us about Into the Dark, your show at the San Francisco Mint in October. 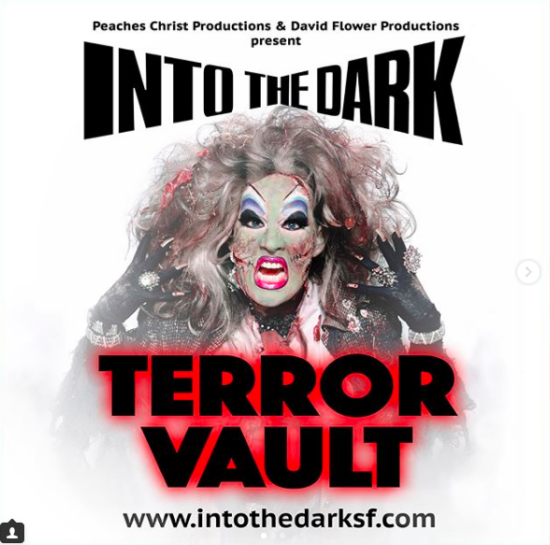 Basically, it’s my childhood dream come true, a haunted house at the old Mint building downtown. It’s my most ambitious show yet, and a bit of a risk. The concept is that at the turn of the century, the city didn’t have a proper prison, so they used the Mint’s vault to lock up serious criminals — cult leaders, crime lords and escaped Alcatraz prisoners. Now they are ghosts, a century later, and you will meet them in my show.

You had a part in Gus Van Sant’s Milk.

It was really exciting. Of course, being here in the city, I knew the story’s significance, so it was a thrill to be personally involved and asked to be part of a scene in drag and to be featured as an extra. At one point, I saw Gus Van Sant pointing at me, and I ended up seeing myself in a clip when Dustin Lance Black won an Academy Award.

In what part of the city do you live?

I live in Hayes Valley, and there is so much to find nearby. I love Ananda Fuara, a veggie restaurant where the food is just delicious and the ambiance is very “cult.” I love a soul food restaurant in the Tenderloin called Brenda’s French Soul Food. Brenda’s an Asian lesbian doing the best New Orleans style cooking in town. Now, how San Francisco is that? My partner manages Kitchen Istanbul, on Clement Street, which serves wonderful Turkish food, so I have to give it a plug.

I’m excited about the success of the New Mission Theater on Mission Street. I love the old theaters in San Francisco. I did shows at the Bridge Theater, and Alamo came in and restored the New Mission. There are a bunch of small theaters built on the balcony, but they kept the big theater in all its glory. Then adding food and bar was really smart, a great example of how to reuse a San Francisco landmark.

Another one is the restoration of the old Strand Theater, on Market Street, where I used to go to see Faster Pussy Cat! Kill, Kill! and Rocky Horror Picture Show. I’m hoping that with all of San Francisco’s money, more of this will happen. People don’t just want to sit at home to Netflix and chill. They want to go out into the city and have a social experience, and this will mean more spaces will be restored. 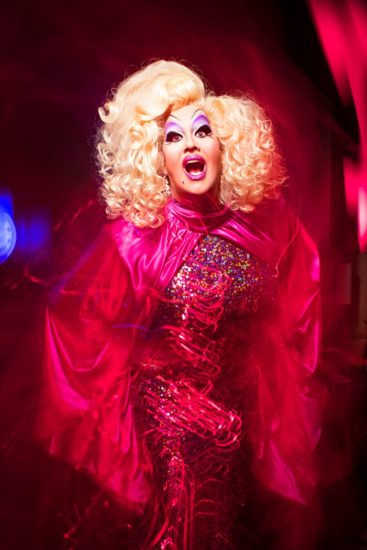 There is a sense that the combination of Netflix and Grindr are killing public social life. How many times have we chatted with a guy on Grindr, and he’s on his couch binging Netflix or Hulu?

My experience is that ticket sales to my shows have gone up over the years. I’m a showman– or showwoman [laughs]–so I have a real hunger for real authentic, live experiences.  Audiences do, too. The more you sit in your room on your phone or computer, the more you want to go out. Yes, you can order D*&^ on the phone, you can have your food delivered, you can watch a great new movie or show in your home theater. But how long can you sit inside and not want to go out? Otherwise, you could just move to the ‘burbs and never go out and lead a very boring life. In fact, people are moving to the city because they want opportunities to be social and to enjoy culture. I think that although gay nightlife has suffered due to apps, there’s a resurgence of people going out. Guys are bored of sexual experiences delivered to your home.

Where do you send friends out into the city who visit?

Bike riding in Golden Gate Park is a great way to spend the day. The natural beauty makes it spectacular. I love to walk down Market Street to the Ferry Building, where I get oysters at Hog Island Oyster Co. and then enjoy them outdoors. The California Academy of Sciences has an impressive aquarium and rainforest. Of course, I love Oasis and whatever Heklina and D’Arcy [Drollinger] have going on. There’s a lot of love at Eagle SF on Sundays.

I’m so happy the Stud has been saved by a cooperative, where I’ve seen queer punk bands, packed dance floors, great drag, all the great stuff that makes San Francisco so special.