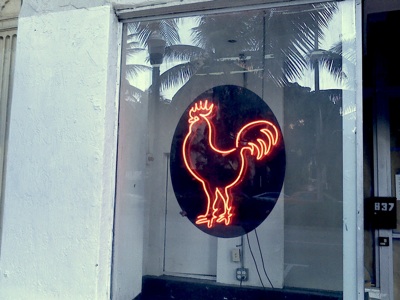 If you’ve ever gone out in New York, you most likely recognize this sign: it is the rooster that graces the entrance of The Cock, the epicenter of East Village gay  debauchery.  Patrons enter the darkened rooms, have some drinks, and find a corner somewhere to engage in shenanigans galore–perhaps accompanied by a stripper, or another civilian who is simply liquored up and of questionable moral character.  And God bless him for that.

But look at that photo! See the palm trees that are so artfully reflected in the window?  The Cock is opening a second location in Miami Beach, where it will hopefully inject some life (and a little scandal) into the nightscape.

The Miami area is thriving at unprecedented levels these days, with multi-million dollar real estate development and tourism pouring in money, but the area’s gay scene has unfortunately simmered in recent years with closure of nightlife locales, couples with a declining interest in the circuit parties that helped build the city as a must-visit destination.  The gay cruise industry has become the party trend of choice, but most of the big LGBT cruises have been setting sail from Fort Lauderdale, not Miami.  And there are still some enormous nightclubs in Miami, but gay partiers aren’t particularly welcome there–where men are ignored at the door when they aren’t accompanied by women.

That’s why this particular opening is especially welcome; it isn’t just another bar.  Despite the crude reputation of the New York bar, The Cock is an established success in the gay nightlife industry, having proven its ability to draw crowds in and generate some excitement with raucous parties and shows reminiscent of better days when gay clubs were, well, a lot more fun.  And if that involves getting the boys to loosen up a little and be naughty, so be it.  South Beach is riding on its own overblown reputation, and people can take themselves too seriously.

The Cock does face some challenges with this Miami Beach location–specifically, with its location.  South Beach’s other gay bars/clubs are several blocks north, and the area between is a rowdy melange of bars filled with Spring Break drunks and Meatpacking District VIP-lounge rejects.  In a town with parking problems so legendary that there is a reality-TV show called “South Beach Tow,” nightlife is dependent on foot traffic; but patrons may not wander all the way down to this new bar when they have to fight through the drunken masses.

Nevertheless, fingers crossed for The Cock Part II.  What’s in store for the new place?  The owners aren’t saying, other than they’re planning opening on Valentine’s Day.  Hopefully the strippers with wear pink undies.