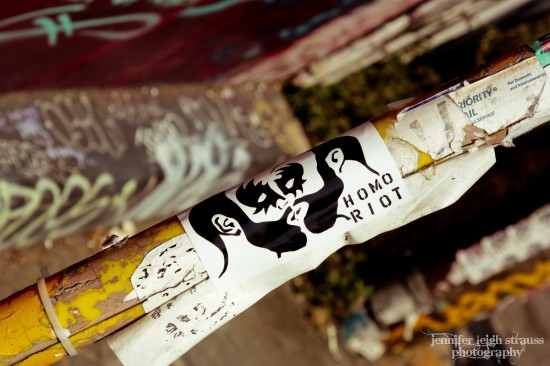 This week, GayCities takes you beyond the museum and down the city’s alley ways and unexplored sidewalks for an insider’s look at the queer artists who’ve made San Francisco their ultimate canvas.

Los Angeles artist Homo Riot does most of his work in Southern California, but luckily for San Francisco street art aficionados, he has taken several trips up to the city by the bay.

“I can’t walk the streets of San Francisco without loosing myself in the fantasy that just around the next corner is the iconic character of Peter Berlin suggestively leaning on a brick wall,” Homo Riot told us when he asked him about the type of inspiration he’s found in San Francisco. “From the invention of his character to the unorthodox way in which he expressed his artistic vision through photography, film, and performance art, Mr. Berlin is inseparable from the city in my mind.”

In September, Homo Riot launched a global campaign urging supporting to spread his message by posting, pasting, or stenciling Homo Riot-inspired wok in their own cities. Of course, San Francisco was very well represented in this endeavor by a street artist know as Egads. And Homo Riot was glad to count on his support.

“The artists working in the urban landscape of San Francisco have always been at the forefront of street art and today’s artists are fortunate to have superb galleries to foster that scene like White Walls and Spoke Art,” Homo Riot said.

Whenever he’s in town, Homo Riot also makes sure to check in at the SF MOMA. “I always walk away with a sense of awe and a burning in me to get back to my studio to create,” he said.

Homo Riot’s own work, a solo show titled “FIST PUMP,” will be on display at Hold Up Art in LA until November 19.

Click on the following pages to see Homo Riot’s work in San Francisco, as well as some of Egads work found in the Castro and the Haight and inspired by Homo Riot.