The success of HBO’s The Gilded Age has sparked new interest in America’s glamorous past, particularly the architecture created near the turn of the 20th century. The actual Gilded Age lasted for approximately 30 years from roughly 1870 to 1900, during a period of extreme economic growth for the US, and the unbridled influx of money led to an architectural renaissance in major cities in the US, where opulent mansions from that era still stand on city streets today.

Some of the most spectacular buildings of this Gilded Age are in Chicago. Although many are still private homes of some very lucky families, one building is open to the public. The Chicago Athletic Association, built in 1893 on the edge of Grant Park, was originally used as a social and athletic club throughout the 1900s. It was later converted into a hotel and is now part of the Hyatt brand.

Converting the building into a hotel was a gift to the city of Chicago, as it allowed public access to the stunning facility for the first time after 125 years as a members-only club. The CAA is famous among Chicago residents for its views of Lake Michigan, and its ornate public spaces like the superb lobby that is covered in intricate wood carvings and stained glass windows.

The hotel features three restaurants and bars inside (plus a Shake Shack on the street level), and behind the lobby is a Game Room that gets crowded with both hotel guests and locals, who drink beers and get rowdy over games of shuffleboard.

The hotel’s guest rooms have been updated, with deluxe beds and rainfall showers. but with a nod to the heritage of the building–including accent pieces styled like old gym equipment. Try to stick the landing after dismounting out of this bed.

The best rooms are the standard rooms, with Lake Michigan views from higher floors.

Speaking of views, the star of the CAA is the rooftop deck, on the front of the building outside of one of the restaurants, Cindy’s. This space is a very popular brunch-and-cocktails spot amongst city locals, who jump at the chance to join friends that are staying at the hotel–because hotel guests get priority for tables, and on nice days the line to get in can be long. But the wait is worth it. Grab your cocktail and take a walk outside:

For more architecture history and tours, check out the following suggestions:

Related: Check out the legendary gay bar scene of Chicago 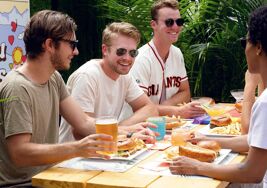