With the successful rollout of the Covid vaccines, people are thinking about venturing out again.

For many of us, traveling beyond the local grocery store has been limited or non-existent since early 2020. With the approaching summer and impending Pride season, the craving for a change of environment is becoming hard to ignore.

Exploring Pride and various historic LGBTQ locations across the Northeast corridor along the Amtrak network is one option with many possibilities. You can catch Amtrak’s flagship high-speed service, Acela, from Washington DC to Baltimore, to Philly, to New York City, and on to Boston all the while enjoying perks like no middle seats and spacious legroom. Book at least 14 days in advance of your travel, and get new low fares on Amtrak’s Acela.

Need to change your plans? No sweat: Amtrak is waiving all change fees for reservations made by September 6, 2021.

On top of this, Amtrak has implemented enhanced cleaning and disinfecting protocols at stations and aboard all Amtrak trains. The trains themselves are equipped with onboard filtration systems with a fresh air exchange rate every 4-5 minutes. They boast wide seats with plug-in power for your cell or laptop, big windows, and plenty of room to stretch your legs.

You can even take your bike or small pet along with you.

Traveling by train also means you’ll be delivered to the very heart of the cities you choose to visit – sometimes just steps from the local gay neighborhood, national landmarks, and parks.

Below are suggestions for enjoying a few Pride highlights along the way.

It will be hard to miss the fact it’s Pride season in Washington. For 2021, the Capital Pride Alliance has announced its ‘Paint The Town Colorful With Pride’ initiative. This encourages “homes, businesses, and neighborhoods collectively show their pride using an array of lively decorations, signs, and art.”

“At a minimum, just fly a Pride Flag,” says Capital Pride Executive Director Ryan Bos. “But we are encouraging folks to go above and beyond to really show their Pride and let everyone know that we are here. We want to show how colorful the nation’s capital can be.”

Those who register will be included on an interactive map, allowing people to conduct their own self-guided tour around the most colorful neighborhoods between June 1-30.

Instead of the usual parade, DC will throw its first Colorful Pridemobile Parade procession on June 12. Following the lifting of capacity restrictions on June 11, smaller events have also been allowed to go ahead, including the Taste of Pride Brunch on Sunday, June 13.

As an added bonus, Washington DC is home to one of the finest railroad terminals in the US: the beautiful Washington Union Station (home to Amtrak’s headquarters).

Baltimore Pride is running from June 13-20. Many of the bigger events will be virtual, but some of the smaller events will be moving forward with restrictions in place. This includes a Pride Fashion Show at Safari Night Club on June 13, and Just Brunchin’, a big drag queen brunch event, also at Safari, on June 20.

When visiting, do check out the Mount Vernon gayborhood. You’ll find the Pride Center of Maryland within this area, as well as a huge mural celebrating one of Baltimore’s most famous gay sons: the drag queen Divine, aka Harris Glenn Milstead.

Emblazoned with the title of one of Divine’s dance hits, ‘I’m So Beautiful’, the mural, by the street artist Gaia, is on the side of a house at 106 E. Preston St. The building is conveniently close to Amtrak’s Penn Station.

The historic Mount Vernon district offers the Walters Art Museum and Peabody Institute. You can also find a 10-foot tall statue of Divine at the American Visionary Arts Museum, in Baltimore’s Inner Harbor.

Philly Pride takes place on September 4, and organizers are hopeful an in-person festival will take place. It will all kick off around noon at The Great Plaza at Penn’s Landing, but some social distancing measures will likely be in place.

Want to travel before then? Philadelphia is one of the most underrated cities in the US, and arriving by train is definitely recommended. The 30th Street Station, with its beautiful Art Deco flourishes, is one of America’s most iconic train stations.

Philadelphia is a city filled with street art and murals. Check out the Pride and Progress painting 1315 Spruce Street, created by Ann Northrup in 2003. The 55’x165′ artwork occupies an entire wall of the William Way Center, the Lesbian, Gay, Bisexual, Transgender community center in Philadelphia. You’ll find it in the city’s gayborhood in the Washington Square district.

The iconic LOVE sculpture by gay artist Robert Indiana, in John F. Kennedy Plaza, is another popular spot for selfies, while Philly AIDS Thrift @ Giovanni’s Room is one of the country’s oldest focused book stores and definitely worth a visit.

Scene-wise, there is always something going on at Tabu Lounge and Sports Bar. Or check out the minority-owned Level Up Bar and Lounge, which is managing to operate a busy schedule of pop-up parties and club nights, with social distancing measures and table bookings in place. It will be focusing its June celebrations on Juneteenth Weekend (June 19).

New York City’s main Pride parade will be a virtual event this year. However, some of the smaller, associated events will be taking place, such as the street fair, PrideFest.

Now in its 27th year, it takes place in and around Greenwich Village on Sunday, June 27, 2021. Protocols are being implemented to make this a Covid-safe event. Numbers will be reduced to 100,000 rather than the 600,000 who flocked to PrideFest in 2019, and the event will occupy a reduced footprint on 4th Avenue, between 13th and 9th Streets.

If that still sounds a little busy to you, there are plenty of quieter ways to mark Pride in New York City. The city is home to the Leslie Lohman Museum, which reopened in March for socially distanced viewings.

It’s showing a retrospective of work by the photographer Laura Aguilar until June 26, followed by a group show entitled, ‘OMNISCIENT: Queer Documentation in an Image Culture’.

Or how about just visiting the Stonewall Inn, the birthplace of the modern Pride movement, and the neighboring Christopher Street Park?

Boston would have been celebrating the 50th anniversary of its Pride festival this June but its parade unsurprisingly had to be postponed. The organizers have arranged several online events, such as a flag-raising ceremony on June 4th. There will also be a Trans Resistance March and Vigil taking place to remember Black Trans Lives on June 12 in Franklin Park.

If you want to physically soak up some of Boston’s scene, check out Club Café for a meal or show. It’s one of the area’s best-known gay bars, and its ‘Napoleon Room’ hosts regular cabaret performers. Advance reservations are essential at the current time.

Cathedral Station is another well-loved, all-inclusive gay sports bar, with a large patio area out front. Its weekend brunch menu is always popular.

Boston is a city rich in history. Check out the 2.5km Freedom Trail, which revisits crucial moments in US history, explore Boston Common, or snack on fresh lobster rolls at Quincy Market. 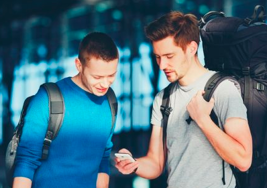 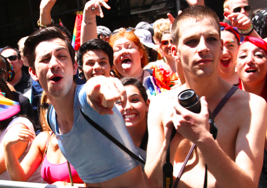