New York City Pride has announced that this year’s theme will be “The Fight Continues”. Organizers say it reflects the adversity the LGBTQ community faces on many fronts, including the ongoing Covid pandemic, and the struggle for LGBTQ rights, particularly for those in the trans, Black and POC communities.

“Within this acknowledgement of what we’re fighting for and the challenges we face, we also must find the strength – together – to continue the fight,” said André Thomas, NYC Pride Co-Chair, in a press statement.

“We’re fighting for ourselves, fighting for the BIPOC and trans members of our community, and fighting for future generations. By making this the 2021 theme for NYC Pride, we acknowledge all that we’ve accomplished and look towards what still needs to be done.

“NYC Pride events offer an opportunity to gather in community and highlight the diversity, resilience, and power of the LGBTQIA+ community, giving us the energy and spirit we need to continue the fight.”

To accompany the announcement about the theme, the organization also released its initial visual campaign images. Shot by Cait Oppermann, they feature a multitude of queer, trans, and BIPOC members and allies of the LGBTQIA+ community, including Gia Love, José Thomas, G Xtravaganza, Krishna Stone, and Reid Jefferson.

The NYC Pride events will take place in June. Once again, because of the pandemic, the main march (June 27) will be presented in virtual format this year, along with a virtual rally (June 25) with speakers.

Other events will include a Human Rights Conference and Black Queer Town Hall. Once a month, in the run-up to Pride, a different chef will run an online, immersive culinary fundraiser as part of the Savor Pride initiative. More details about the next event at Savor Pride.

Besides these virtual events, it’s hoped that some in-person events may also be scheduled. Further details will be announced over the coming weeks.

While New York Pride will go ahead as a virtual event, Pride in London in the UK has announced that it will be moving from the summer to September. In a media statement last week, organizers have said it will go ahead on September 11, 2021.

It has yet to be announced what format the event will take place. Organizers say they are working closely with health officials and the Mayor of London’s office. However, the UK has already managed to vaccinate a third of its adult population. Its government has said it hopes to have given everyone two shots of Covid-19 vaccine by August, suggesting that a real-life Pride march might go ahead. 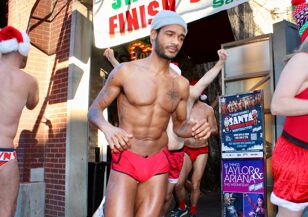