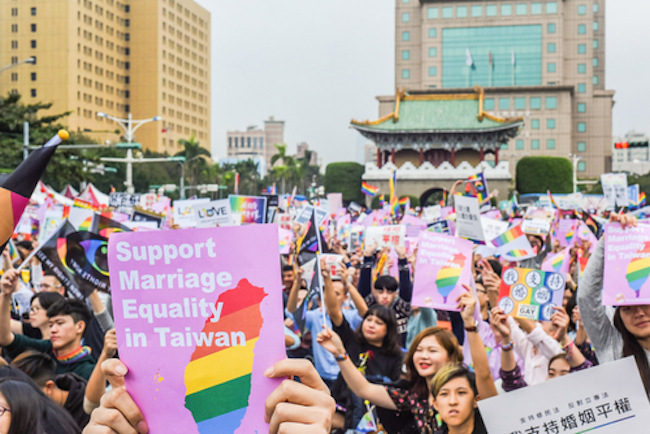 Taiwan will become the first place in Asia to legalize same-sex unions.

The highest court ruled laws that prevent same-sex couples from marrying are unconstitutional and a direct violation to a person’s right to equality.

As the BBC reports, parliament has two years to revise current laws or pass new ones.

A press release says the court found that “disallowing two persons of the same sex to marry, for the sake of safeguarding basic ethical orders” constituted a “different treatment” with “no rational basis.”

In conclusion, “such different treatment is incompatible with the spirit and meaning of the right to equality” that Taiwan’s constitution protects.

#Taiwan – top judges ruled in favor of gay marriage, paving the way for it to become the first in Asia to legalize same-sex unions! ???️‍? https://t.co/ff1zXWu90W

Tfw Taiwan legalizes gay marriage while our Christian government in German still can't get the sticks out their asses ???

Okay but how do I work today? Every five minutes my brain's like "MARRIAGE EQUALITY IN TAIWAN!!!" and I'm like pic.twitter.com/slwWwP9RXC

'I'm leaping with joy like a bird', says Taiwan's gay rights champion as court rules in favour of marriage equalityhttps://t.co/r2SyKKeOUv

Congrats Taiwan for being the first Asian country to recognize gay marriage!!!!!

so happy to see that Taiwan has legalized gay marriage, our world is growing!❤️???? #loveislove

Taiwan to allow gay marriage in first for Asia. So proud of my country! Life gets better together! Be part of something great?️‍?#LGBTA #HPE pic.twitter.com/u0EyvVolj3

good morning gay marriage got legalized in taiwan and the pope despises trump, how are you doing today ✨?️‍?✨