UPDATE: The ever-expanding list of States that extend equal rights to their LGBT individuals is getting harder to nail down. In light of the growing number of states winning the battles for their friends of Dorothy with many additions on the horizon, we’re nailing down the list of official states where you can actually get hitched right now. Without further adieu, here is the chronological list of 17 US States (plus the District of Columbia) where same-sex marriage is officially legal as of January 2014.

**The state Senate approved same-sex marriage on February 14, 2013, and the state House passed it on November 5. However, the law will not take effect until June 2014. 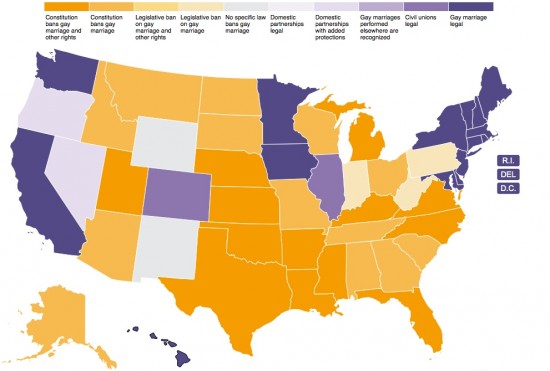 ORIGINAL STORY (April 26, 2013): With the state marriage equality train picking up steam at an ever-quickening pace, it’s a good time to take a breath and see where we currently stand across the nation.

Nine states and the District of Columbia currently allow same-sex marriages, with California and Rhode Island poised to become the next states to sanction (or in California’s case, re-sanction) them.

Lesser known to many, three tribal jurisdictions have also implemented marriage equality: the Coquille of Oregon, the Suquamish of Washington, and the Little Traverse Bay Bands of Odawa Indians.

Here’s Queerty’s rundown of the states with full marriage equality, and a brief look at the various roads that got them there.

Massachusetts | May 17, 2004
Leading the way for the United States, Massachusetts became only the sixth jurisdiction in the world to sanction marriage equality in 2004, more than four years before another state would follow suit. The legalization came as the result of the state’s Supreme Court judgment that only allowing heterosexual couples to marry was unconstitutional.

In October 2008, Connecticut’s Supreme Court ruled that denying gays the right to marry was against the equality and liberty rules in the Connecticut Constitution. Marriage equality became law the following month.

Iowa  | April 27, 2009
Iowa’s Supreme Court ruled in early April 2009 that denying marriage licenses on the basis of sexual orientation was a violation of the equal protection clause of the Iowa Constitution. Marriage equality went into effect three weeks later.

Vermont | September 1, 2009
After having been the first state to legalize civil unions in 2000, nine years later Vermont became the first state to make marriage equality a law through the enactment of a statute rather than by a court decision. This came despite a veto by the state’s then-governor, which was overridden by the Vermont legislature.

District of Columbia | December 18, 2009
After being introduced by openly gay member David Catania in October 2009, the Council of the District of Columbia passed the Religious Freedom and Civil Marriage Equality Amendment Act, which was then signed into law by Mayor Adrian Fenty.

New Hampshire | January 1, 2010
New Hampshire first allowed civil unions on January 1, 2008. A year and a half later, following the passage of a same-sex marriage bill in the state’s legislature, Governor John Lynch signed the bill into law, which went into effect on the first day of the following year. All existing civil unions were converted to marriages, unless otherwise dissolved or annulled.

New York | July 24, 2011
New York’s appeals court left the question of marriage equality to the state’s legislature in 2006, but it took five years for legislation to clear the New York State Senate. The Marriage Equality Act passed on June 24, 2011, just in time to spice up that year’s Pride.

Washington | December 6, 2012
Washington State’s same-sex marriage bill was approved by both houses of the state’s legislature and signed by Governor Christine Gregoire in early 2012. Opponents then blocked its implementation, putting the question on the ballot last November. Voters approved by a margin of 54% to 46%, and marriage equality became law a month later on December 6.

Maine | December 29, 2012
The road to same-sex marriage in Maine was one of the more twisty:  On May 6, 2009, John Baldacci became the first governor to sign a marriage equality bill into law. The very next day, opponents began a campaign that eventually repealed the law by voter referendum that November. Three years later, same-sex marriage itself was put on the ballot, and this time voters approved.

Maryland | January 1, 2013
Following a campaign by its Democratic legislature and Governor Martin O’Malley, last November Maryland put the question of marriage equality before voters, marking the first time that gay marriage was achieved through a popular vote. It went into effect on New Year’s Day 2013.