Palm Springs features warm weather, gorgeous vistas, and some amazing places to stay, from clothing-optional resorts for gay men to luxury hotels to a plethora of short-term rental listings, where you can rent an entire pool house and play host to your friends.

We just finished a stay at Vrbo home, Casa Bonita (pictured above), which featured three bedrooms wrapped around a shimmering pool that looked onto the rock outcroppings that frame the desert paradise. This is a way to enjoy the city like a local–and take in the festival at the same time. The house was a 7-minute Uber to the gay strip, and all the shops and restaurants situated in downtown Palm Springs. (There are many Vrbo options if you book ahead.)

Here are the festival’s offerings worth booking time in Palm Springs to check out. After all, the city first rose to fame as the playground of Hollywood’s famous and beautiful…

Love, Spells and All That (Turkey/Germany) — Two women who were teenage lovers separated by their parents reunite after 20 years. The cosmopolitan Eren returns to her childhood island in Turkey determined to rekindle her great passion for working-class, superstitious Reyhan in this one-of-a-kind love story that casts a magical spell. Directed by Ümit Ünal.

Money Boys (Austria/Taiwan/France/Belgium) — In this tale of love, identity, and the pursuit of happiness, a city-dwelling sex worker returns home to the family he supports, only to be met with homophobic disdain, and encounters a young local he reluctantly welcomes into the business. Directed by C.B. Yi. 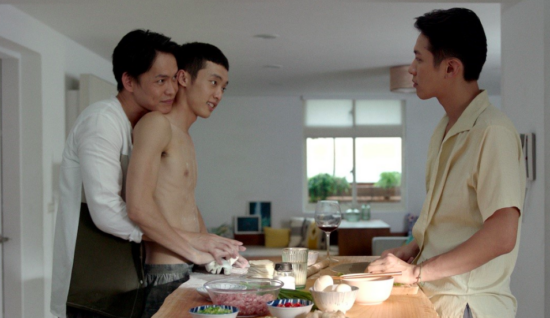 No Straight Lines: The Rise of Queer Comics (USA) — Vivian Kleiman’s award-winning and lighthearted documentary looks back on the birth and evolution of queer comics, reflecting on the impact of representation in the art form, from the early days of subversive works to the mainstream success of Alison Bechdel’s Fun Home. Directed by Vivian Kleiman.

The Swimmer (Israel) — Erez is a gay swimmer competing for a spot in the Israeli Olympics at a desert training camp where he must deal with the homophobia of the athletic world and his hidden desire for his rival, Nevo. But showing his true feelings could prove dangerous. Directed by Adam Kalderon. U.S. Premiere.

Valentina (Brazil) — When trans teen Valentina moves from the city to a small, conservative town, the community quickly sets up roadblocks to her happiness, forcing the shy teen to stand her ground in this inspiring and hopeful story of gender expression and solidarity. Directed by Cássio Pereira dos Santos. In competition for the Ibero-American Award and the Young Cineastes Award.

Boulevard! A Hollywood Story (USA) — In this astonishing and long-buried story, Dickson Hughes and Richard Stapley, two young songwriters (and closeted lovers), were hired by screen icon Gloria Swanson to write a musical version of Sunset Boulevard. When Gloria fell for the handsome Stapley, life began to imitate art, with disastrous and far-reaching repercussions. Directed by Jeffrey Schwarz

Sweetheart (UK) — Convinced she’s about to have the worst week of her life while on holiday with her gratingly upbeat and “normal” family, socially awkward misfit teen AJ (Nell Barlow) unexpectedly falls head over heels for a dreamy, flirtatious lifeguard named Isla. Directed by Marley Morrison.

Check out the full GayCities guide to Palm Springs