October is LGBTQ History Month in the US. Rewind 20 years, public memorials and monuments for LGBTQ figures were a rare sight. However, as the country continues to progress throughout the decades, more and more historical figures and locations are now receiving due recognition. These monuments help us celebrate our history, remember our past struggles, and give us a reason to be proud. Learn a little history and leave your walking shoes with our virtual tour of the most prominent LGBTQ Memorials across the country.

Hudson River Park became home to New York’s first official monument to LGBT history in 2018. It’s located on the waterfront, roughly between West 12th Street and Bethune Street. Artist Anthony Goicolea came up with the design, which features nine boulders in a circular design. In addition, thick wedges of glass sit within some of the boulders, bisected in half and reconnected by the translucent material.

“Traditionally glass is something delicate and fragile, but here it is used to make the boulders stronger,” Goicolea explained at the time of his work’s unveiling. When light hits the glass at certain angles, it also throws off rainbow reflections. One boulder features an inscription by Audre Lorde, which states: “Difference is that raw and powerful connection from which our personal power is forged.”

Dedicated in June 2016, during Pride Month, the Stonewall National Monument marks the role the Stonewall uprising played in the LGBTQ rights movement in the US and beyond. In the West Village neighborhood of Greenwich Village, it encompasses the small Christopher Park in front of the Stonewall Inn and the block of Christopher Street bordering the park (opposite the Inn). Christopher Park features the Gay Liberation Monument, a sculpture of white, bronze figures, completed in 1980 by artist George Segal.

If visiting, stop into the Stonewall Inn, which features items of historical interest on its walls and occasional exhibitions.

Harvey Milk made headlines as the first out gay man elected to political office in California. A disgruntled former colleague assassinated Milk just a few months after taking up his role in 1978.

The Castro Muni Metro station opened in 1980, and its associated transit plaza was renamed in 1985. You can’t miss it: A giant rainbow flag flies above it, viewable from far and wide. The plaza is due to undergo major redesign and redevelopment work over the coming years but its name will remain the same.

You’ll also find a couple of Harvey Milk murals in the Castro, plus a plaque in his memory at 575 Castro Street, where Milk ran a camera store. The nearby GLBT Historical Society Museum (4127 18th St, San Francisco, CA 94114), offers more details about Milk’s life, and the LGBTQ history of San Francisco.

The National AIDS Memorial Grove lies in Golden Gate Park. Its history dates back to 1989 and the height of the AIDS epidemic in San Francisco. Its aim is to provide a healing sanctuary for those impacted by HIV and the loss of loved ones. It remains a beautifully tended woodland grotto to explore and a place of quiet contemplation.

As you find yourself walking beneath the fronds of giant ferns, you’ll spot the many rocks engraved with the names of those lost to AIDS. A ‘Circle of Friends’, formed from Minnesota flagstone, bears the engravings of around 2,500 names. New tributes still join that list. Last week, a boulder was dedicated to Timothy Ray Brown: the so-called ‘Berlin Patient’ was cured of HIV following a bone marrow transplant in the mid-00s. Brown passed away last year from leukemia.

“The National AIDS Memorial holds the awesome responsibility to tell the story of the AIDS crisis and to ensure all lives lost are never forgotten,” said John Cunningham, CEO, National AIDS Memorial, of the latest addition to the Grove. “Timothy Ray Brown is truly a hero and to have his name engraved upon a boulder in the Grove will ensure future generations will know how in life he touched so many.”

Key West unveiled its memorial to local people lost to AIDS in 1997. It’s located at White Street and Atlantic Boulevard, at the entrance to the White Street Pier – a particularly beautiful and serene spot. It consists of several Zimbabwe granite slabs engraved with poems and the names of over a thousand people. It is the site of a candlelit march each World AIDS Day. The website KeyWestAids.org also lists the names of those featured.

Related: Five memorials to check out on World AIDS Day – virtually and in-person

Before the 2016 tragedy at Pulse in Orlando, the worst attack on a gay bar in the US has largely been forgotten. An arson attack on the Upstairs Lounge, on the edge of the French Quarter in New Orleans, in 1973, left 32 people dead. At the time, the media and city authorities were comparatively unsympathetic to the loss of LGBTQ lives, and some relatives did not even come forward to claim the bodies of their loved ones, due to the stigma of them being present in a gay bar.

Authorities never arrested or convicted anyone for the crime. A man widely suspected of being the culprit died by suicide in 1974. The

It wasn’t until 40 years later, in 2013, that a permanent memorial was placed on the sidewalk outside the building (at 604 Iberville and Chartres).

Chicago’s LGBTQ district recently renamed Northalsted from its former moniker of Boystown, is one of the most celebrated gayborhoods in the world. It’s only fitting that besides having one of the country’s leading LGBTQ centers (The Center on Halsted), it also has one of the biggest memorials to those who helped pave the way for our rights.

The Legacy Walk’s first 18 pylons first appeared for National Coming Out Day, October 11, 2012. Since then, each year, further pylons join the sidewalk. They feature bronze plaques with information about notable activists and figures.

The Pulse nightclub massacre in summer 2016 was, at the time, the worst mass shooting incident by a lone gun person in US history. Pulse was a popular LGBTQ venue in Orlando, Florida, particularly popular with a young, Latino queer crowd. The tragedy resulted in 49 deaths and 53 serious injuries.

In the days following the attack, the venue became a place of pilgrimage. A wall around the site, decorated with murals and testimonials, became an interim memorial. You can visit it, view the exterior of the club, the original ‘Pulse’ sign, and tributes to the lives lost. You can also check it out virtually.

It will eventually be replaced by the National Pulse Memorial & Museum (set to open in 2022). In 2021, Congress designated the entire site as a national memorial, and the plans for it look absolutely stunning. 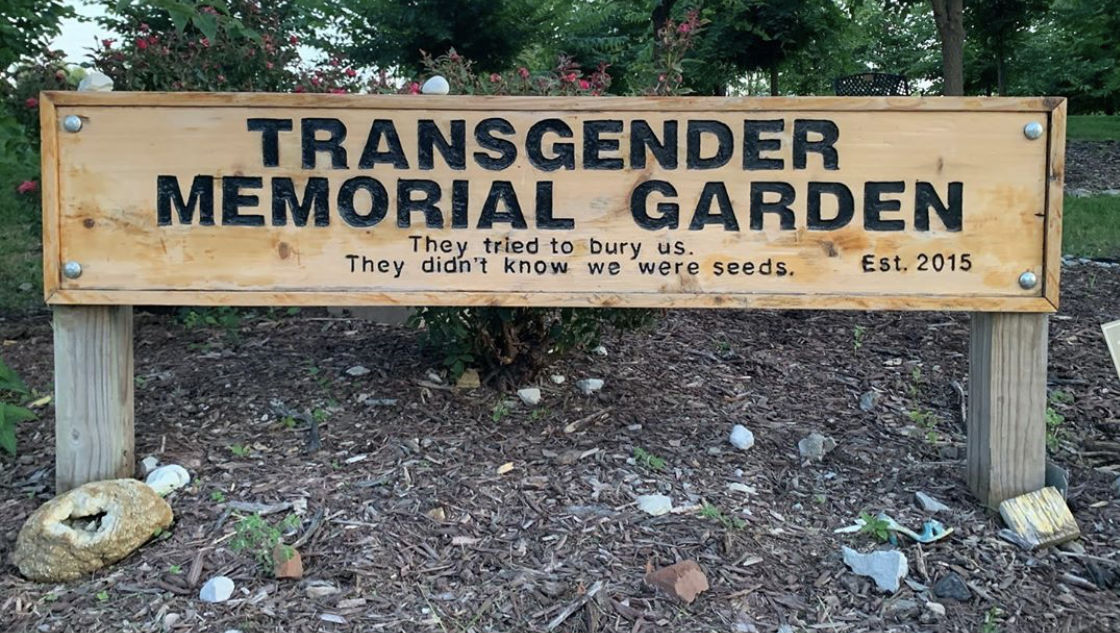 Set up in 2015 by volunteers, it is the first garden in the United States to honor the lives of transgender victims of violence (and the second in the world after a similar initiative in Manchester, England).

The garden is located at 1469 S. Vandeventer Avenue (at the intersection with Hunt Avenue) in The Grove neighborhood. St. Louis Metro Trans Umbrella Group launched and coordinated the garden, with some help from the organization, Plant for Peace STL, which donated 34 trees. A path winds through Hackberry and Redbud trees, leading to a community circle: a quiet place for contemplation.

Related: Transgender Memorial Garden in St. Louis: “They tried to bury us. They didn’t know we were seeds.”

This marker commemorates the site of Giovanni’s Room in Philadelphia, which is the oldest gay bookstore in the US. The original store, named after the novel by celebrated, Black, gay writer James Baldwin, first opened in 1973.

The store’s original owner retired in 2014 and there were fears the business may close. However, Philly AIDS Thrift took on the ownership, renaming it ‘Philly AIDS Thrift at Giovanni’s Room’. The Pennsylvania Historical and Museum Commission erected the marker in 2011, on the corner of 12th and Pine Street.

Philadelphians love their history, as well as street art and murals. Check out the Pride and Progress painting 1315 Spruce Street, created by Ann Northrup in 2003. The 55’x165′ artwork occupies an entire wall of the William Way Center, the LGBTQ community center in Philadelphia. There’s also a street marker to local civil rights and LGBTQ icon, the late Edie Windsor, at 13th and Locusts Street, while a block of 13th street was renamed Edie Windsor Way in 2018.

Francis Millet and Archibald Butt were two US officials born in the late 1880s. They were close friends who lived and traveled together over several years. Many have suggested a romantic link between the two men.

Millet served on the Commission of Fine Arts and took part in the design of the National Mall, while Butt was a Major in the U.S. Army and a presidential military aide. Traveling back from Europe together in 2012, the men were aboard the Titanic when it sunk and both perished.

The Senate and House approved a memorial fountain in their memory. Dedicated in 1913, the National Parks Service now lists the memorial on its list of LGBTQ Heritage sites. It’s located in Presidents Park, near the White House in Washington DC.

The Pink Dolphin monument lies on a promenade in R.A. Apffel Park/East Beach, Galveston Island, Texas. When dedicated in 2014, it became the first LGBTQ monument in the southern United States. Artist Joe Joe Orangias, writer Sarah Sloane, and scientist Frank Prega created the monument (nicknamed Sandy by local park staff). Carved from red sandstone, the dolphin is a nod to the ‘Pink Dolphin Tavern’ on the island, home to the ‘Pink Posse, a local group of LGBTQ activists.