In April, Juanita MORE! was elected Empress of the Imperial Council of San Francisco, a venerated nonprofit founded by Jose Sarria in 1965 that distributes charitable donations to other nonprofits.

More first met Sarria at a Pride event in 2005.

“José was like royalty and looked at you with much wisdom,” she says of Sarria. “He was courteous, kind, and generous in his opinion. He adored the attention that he was getting and it was so well-deserved.”

More’s accolades are richly deserved as well. This past June, she named the San Francisco Bay Area Queer Nightlife Fund (QNF) the beneficiary of her popular annual Pride Party. The organization promoted queer nightlife in the SF Bay Area while things were closed during the height of the COVID-19 pandemic.

“So many friends lived day-to-day and were struggling to pay their rent,” she says.  “It was essential to keep the energy and spirit of our cities nightlife workers up and alive.”

It is many such initiatives that have made Juanita not just the queen of San Francisco nightlife but the mother of its workers and stars.

“San Francisco has always been my home and, quite frankly, it’s one of the most beautiful cities in the world,” she tells GayCities. “My first apartment was on top of Nob Hill in a beautiful Victorian home, and though my room was in the basement and had no windows –– I loved living in SF. I still adore riding the cable car, walking my dogs down to the waterfront, and I get joy whenever I cross the Golden Gate and Bay Bridges. My years in the culinary industry and my love of food have allowed me to cook and eat in some of the city’s most delicious eateries, from food trucks to Michelin-starred dining, and everything in between. I’ve stomped my heels through the majority of our queer nightclubs across San Francisco’s entire 49 square miles. I can honestly say that there is a little place for everyone here in the magical city.”

We followed Juanita on two fabulous San Francisco nights where she held forth at venerable bars, restaurants, and institutions with her many fans as photographer Fred Rowe snapped her likeness everywhere.

Here is a sampling of Juanita’s faves, narrated of course by Miss More herself: 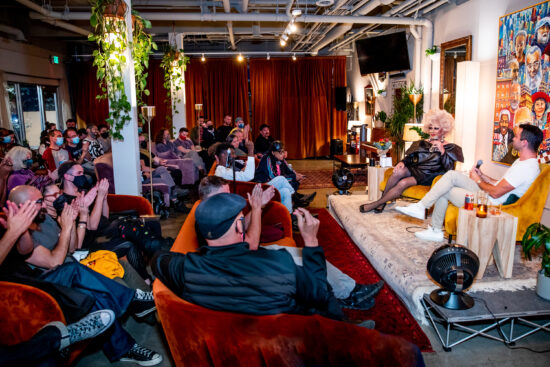 I recently got to sit down for an interview with business owner Manny Yekutiel of Manny’s — a community-focused meeting and learning place in the Mission District that features a nonprofit restaurant that hosts political, civic, art-related events. The gathering space feels like an extension of your living room.

Manny not only asked me all the tough questions — he gave me a great chance to share stories about my life with friends, family, and followers. I talked about growing up in the East Bay and coming out as a teenager in San Francisco, and my tenure as Empress of the Imperial Council of San Francisco. But most importantly, my role as mother to many in this city. Manny appreciated my motherly style of tough love. 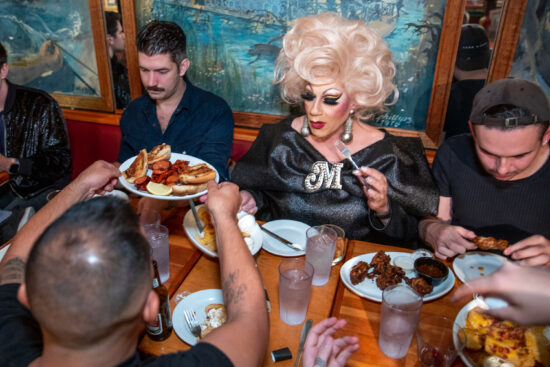 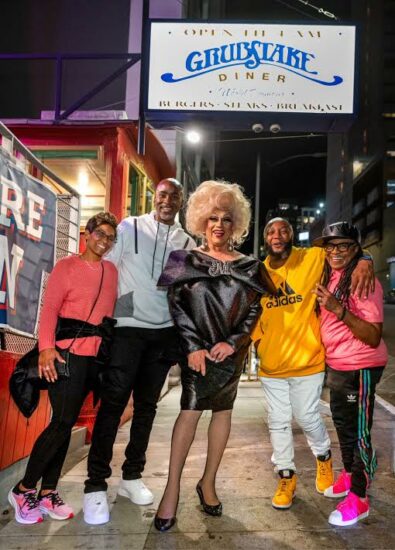 I’ve been a San Francisco District 3 resident and customer of Grubstake for 30 years and have a solid connection to Polk Gulch’s history and legacy, as this is where I came out as queer as a teenager. The diner is a unique gathering place, which has been home to generations of queer activists, community leaders, and allies.

I have spent many early mornings here, eating and laughing while enjoying the burgers and shakes after a long night at the clubs. My go-to is the Nugget, a burger with cheese, bacon, and topped with a fried egg; there is nothing more satisfying at 3 AM.

I invited some friends and family to join me for that burger. Some of whom have been dining there with me for years. The conversation was typical of most family gatherings — we joked about our day and spoke about our future.

My good friend Alex U. Inn joined us, decked out in Court of More is MORE! paraphernalia. For the past few years, Alex and I have produced The People’s March, a rally and protest on Pride Sunday led by an all-Black, Brown, and Indigenous committees of Trans and Queer activists, community leaders, artists, and performers.

Photo A: Sitting down with family and friends for a late-night meal

Photo B: Meeting new friends with friends and activist Alex U. Inn (R) 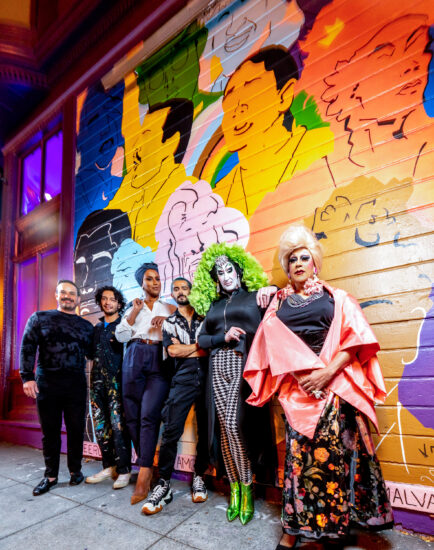 I’ve been actively involved with The San Francisco LGBT Center since its doors opened in 2002. It has been a place to connect the community with opportunities, resources, and one another to achieve the vision of a more robust,  equitable world for LGBTQI+ people and our allies.

In June of 2021, J. Manuel Carmona and Simón Malvaez, two queer local artists, finished work on a new mural titled Queeroes on the side of the community center’s building at the start of Pride Month in June. The mural features depictions of local, national, and international luminaries, both living and deceased, which include the following:

I have always been a grand champion of artists. Over the years, I have commissioned and been bequeathed my likeness in many forms. There have been eight fabulous murals with my image gracing the sides of buildings throughout San Francisco — five of which contain my French Bulldog, Jackson. It’s because of him that I consider myself nothing more than a dog walker. 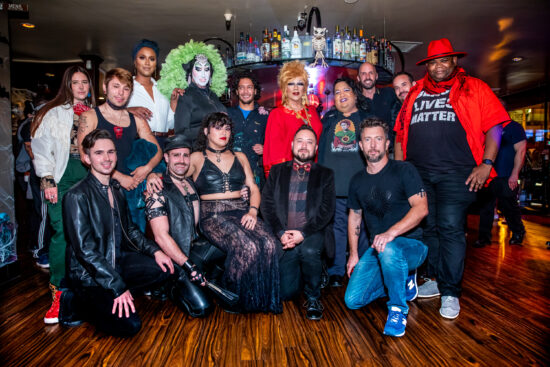 The Lookout Bar has been voted Best Gay Bar in San Francisco three years running with its wrap-around balcony, which offers one of the best views in the Castro. The Lookout has become a place for the city’s queer movers and shakers to gather and raise awareness about our community’s needs.

Each Sunday, right outside their door, they host some of San Francisco’s most talented artists at the Noe Art Mart, where local artists show off their creativity and purchasable products and artworks.

At the Lookout, I’ve been fortunate enough to serve food out of their kitchen in the form of a pop-up called MOREfood, during the height of the pandemic. I’ve also got the rare chance to perform a duet with Sister Roma and hosted a letter-writing campaign where we sent postcards to the White House, letting #45 know how we felt about him.

This place truly is my “Cheers” — everyone here does know my name. 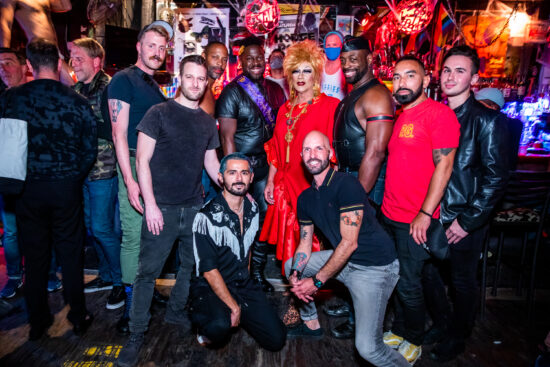 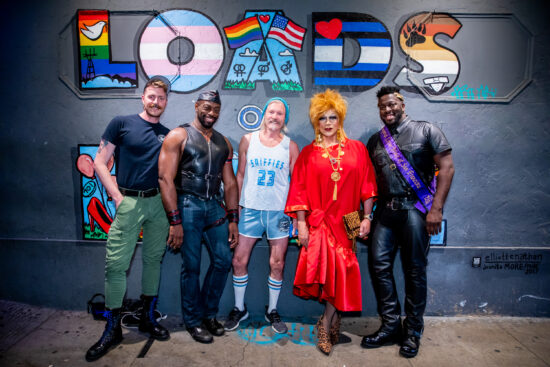 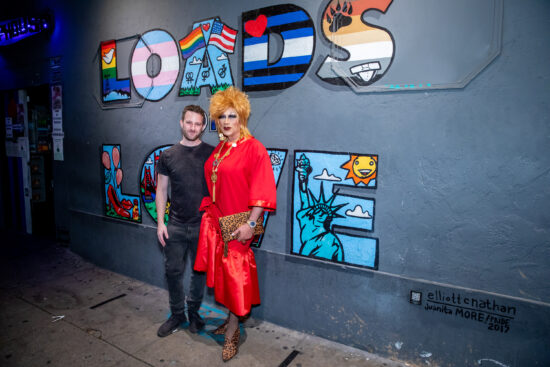 The Powerhouse Bar is unquestionably the biggest and most popular South of Market bar, having set the style of no attitude, dirty community fun. They have been the anchor of the leather bar scene on Folsom Street for over two decades. Weekly, the bar promoters continue to support some of the community’s most impactful organizations by donating a portion of the door profits. For example, the monthly party BEATPIG that I host with Walter Gómez, Jr has helped raise $20k for local charities over the past 11 years.

Powerhouse is the bar that I spend most of my time in these days. It’s one of the most diverse bars when it comes to age in our community.

A gentleman, decked out in leather from head-to-toe, started a conversation with me by revealing his age ––85!, he said He went on to thank me for creating a party where he feels comfortable attending at his age.

If I do nothing else in my life — I’m proud of that.

Behind the bar: Jason Singh and bar manager Scott Peterson

All photos by Fred Rowe Foto