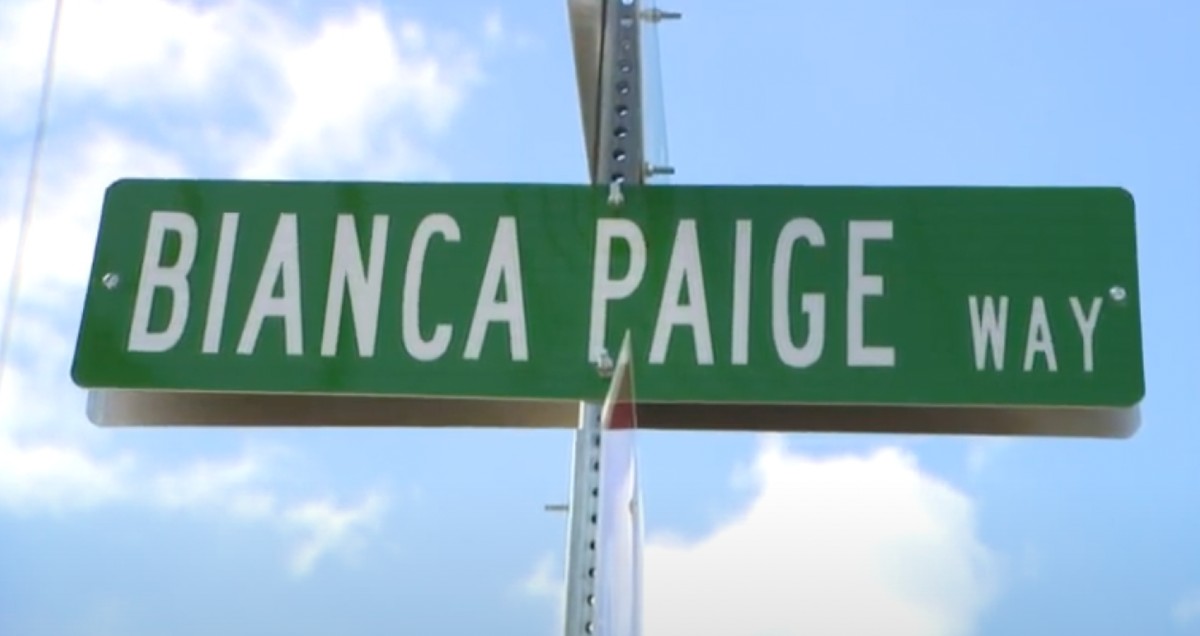 Nashville, Tennessee, just named a street after a legendary, local drag queen. Bianca Paige was the creation Mark Middleton. Born in 1964, the much-missed entertainer died in 2010 of lymphoma, according to CNN.

The city already had a Bianca Paige Day established (August 27), in honor of his memory and legacy. After being diagnosed with HIV, Paige worked tirelessly to raise awareness about the virus and fundraise for research. It’s believed he raised more than $1million during his life.

Now, to mark Pride Month, Nashville unveiled a street named after him last Saturday. Bianca Paige Way (formerly Carney Street) is just outside the downtown area, near local gay bar Trax, where Paige made regular appearances. You’ll find it behind the bar, between Second Avenue South and Ensley Boulevard.

Among those at the unveiling was Mayor John Cooper. He tweeted, “Today, I joined so many to celebrate and honor the life of Bianca Paige, a Nashville legend. The first street in America, named after a drag performer, is right here in our city.”

Today, I joined so many to celebrate and honor the life of Bianca Paige, a Nashville legend. The first street in America, named after a drag performer, is right here in our city. pic.twitter.com/85G2oA3u6B

Those that new Middleton say the street name is a fitting tribute to a unique individual.

Ron Sanford, a club owner who was a friend of Middleton’s for two decades, said the performer tested positive for HIV in the mid-90s.

“Mark was an entertainer’s entertainer,” Sanford told GayCities. “When he walked out on stage, he just grabbed your attention. He was also an MC and was very, very funny. He was a beautiful drag queen, but when he would come out, his voice sounded like Harvey Fierstein [which] immediately made the crowd laugh.”

“He was an incredible entertainer. When he was diagnosed with HIV/AIDS, he decided to make the stage his platform. He would come out and talk about it and tell the younger kids to get tested: ‘Know your status, don’t be afraid to get tested’.

“He also decided the last number he did at every show, he would dedicate that to AIDS and HIV. He donated over a million dollars, one dollar at a time from his tips. So it was a combination of him as an incredible entertainer and also as a wonderful humanitarian. Mark used to say, ‘The talent I have is God’s gift to me. What I do with that talent is my gift to God and my community.’”

Sanford told Nashville Scene he’d often find Middleton outside the club in the early hours of the morning, counseling young gay people who had been recently diagnosed with HIV and who’d waited all night to talk to someone who knew what they were going through.

“He would have been ecstatic but very, very surprised,” says Sanford when asked how Middleton would have reacted to having a street named after him. “He never did realize what he did for the community. He was always very humble.”

Related: Nashville’s Lipstick Lounge is a karaoke gem for “all humans”

Another of those present at last weekend’s dedication was local council member Brett A. Withers (District 6).

“One thing that set Bianca Paige apart from many other drag performers at the time was that she was so open about Mark’s HIV status,” Withers told GayCities.

“And she used that status to raise awareness and to raise funds for HIV research and services. Bianca was more than an entertainer but was also an ambassador and a bit of an instigator to bring about awareness and change related to HIV and attitudes toward and treatment of persons living with HIV.”

“Bianca Paige actually laid the groundwork for the incredible success of the Music City PrEP Clinic today. We opened our doors to our first patients less than three years ago with the mission of reducing the number of new HIV transmissions in Nashville to ZERO by prescribing PrEP, a once-a-day pill that prevents HIV. We now have more than 6,500 patients and we see about 450 new patients a month.

“We were very proud to be a part of this year’s celebration and dedication of Bianca Paige Way. Her beautiful legacy of saving lives and making the quality of life better for thousands of Nashvillians is now commemorated and cemented in Music City’s history forever.”