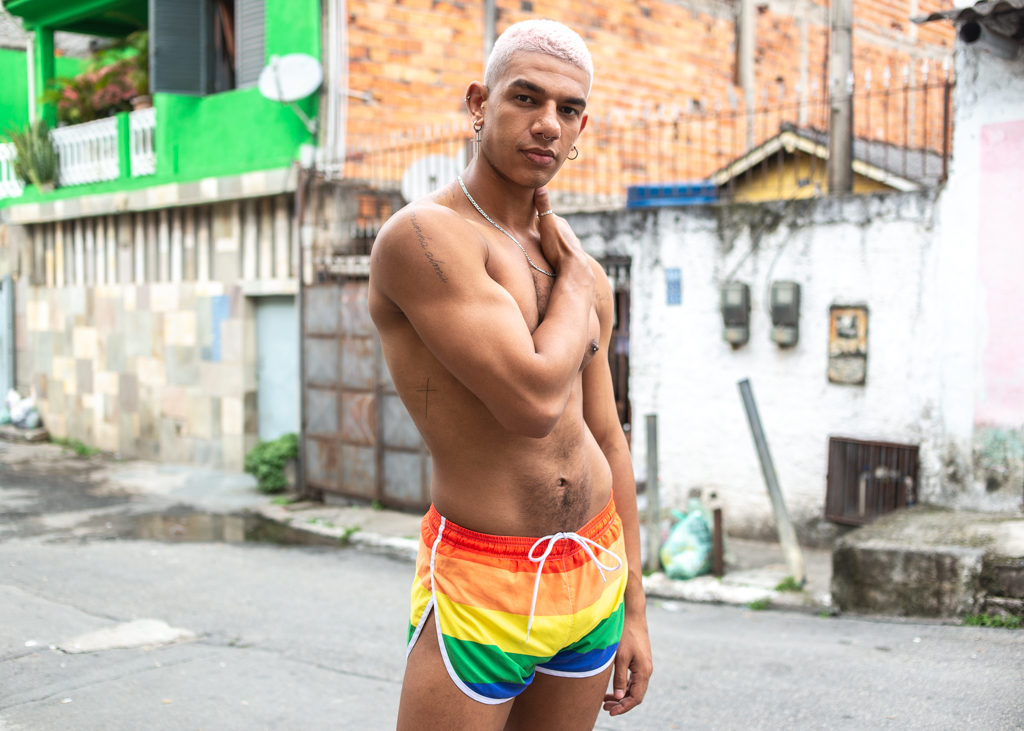 The latest documents a trip to São Paulo, Brazil.

Below Liam exclusively shares with GayCities a selection of photos along with a bit of behind-the-scenes commentary about each. 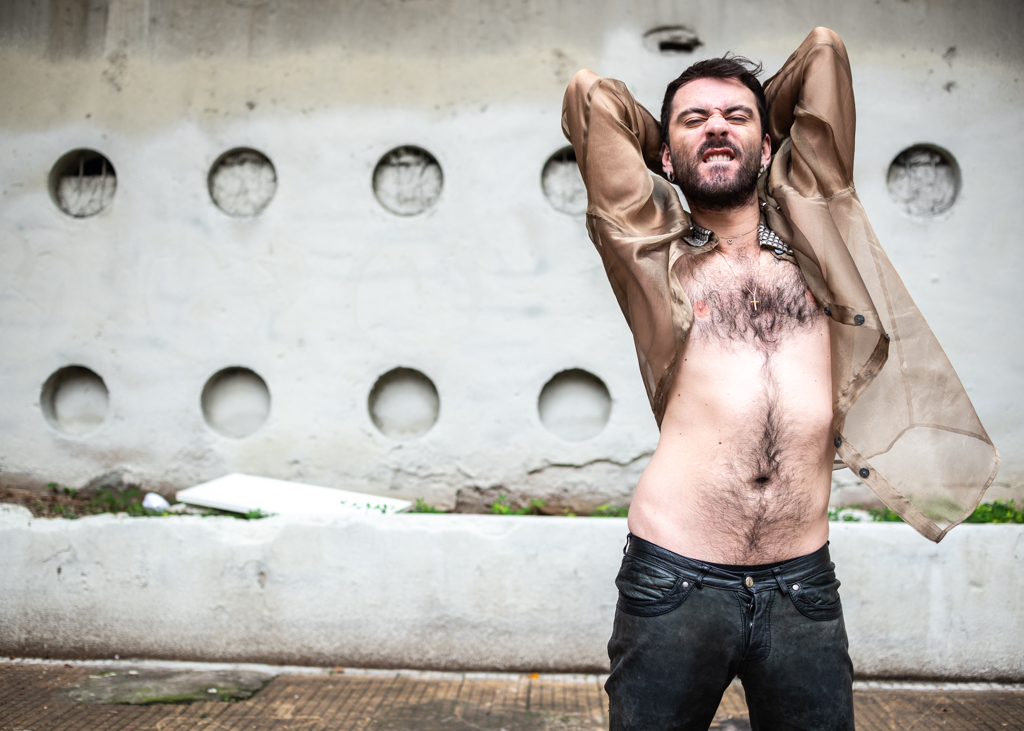 I came to Brazil in November-December 2020, during a time when São Paulo was just re-opening after COVID-19 cases had dropped to record lows and the country was looking to welcome in summer and a new post-pandemic era. Little did anyone know that a third wave was yet to come, but in this moment the city was alive and its people full of anticipation. Yohan was probably the best example of the new spirit of São Paulo. A performer and musician, he’d been quietly quarantining for months and couldn’t wait to get back in action, filling his calendar with gigs, recording sessions, and photoshoots of course. It was a stroke of luck to meet him though. One of the other guys I meant to shoot got cold feet, and out of guilt he said I could shoot his friend Yohan instead. ‘Why not?’ I thought, and the result was actually one of the most unusual photoshoots I’ve done. Since I tend not to photograph ‘celebrities’ or the like, often the guys I meet are a little on the shy side, sometimes even stiff in a shoot. I tend not to mind, enjoying the awkward-cuteness of a lot of those images, but I won’t deny how fun it was to shoot someone so effervescent, so full of poses and so full of fabulousness. 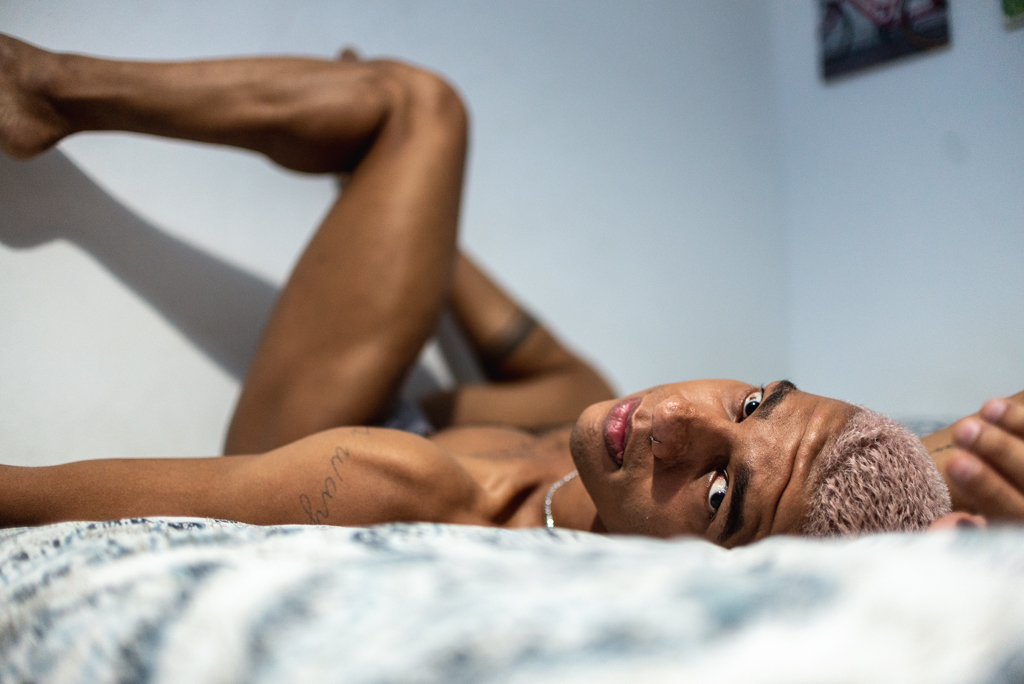 I’ll always remember the scene I arrived to as my taxi approached Mike’s house. From the main road we meandered up and down some narrow hilly streets to find in the distance a tall guy wearing nothing but little rainbow shorts and a pair of Havaianas playing with a dog. ‘That must be Mike’, I thought, and as I got out of the car and called out his name, the dog rushed over and bit me on the calf! Some shouting and scolding ensued from Mike, and then once it was determined that I was okay (fortunately, the bite didn’t break the skin) there were hugs and kisses all around to welcome me to the neighbourhood. Everything was so colourful and alive, including the brightly painted houses, the lads sitting on stoops chatting, and the kids playing soccer down an alleyway. But when I told Mike how much I loved his neighbourhood, he rolled his eyes, “Why do foreign guys always say they love the poor districts of Brazil?” That wasn’t what I meant, but I got his point. A lot of people look for a certain so-called ‘favela chic’ when the visit Brazil, and they treasure anything they might consider ‘exotic.’ I can see how that could be insulting. So I apologized, but after that dog bite, I think we were even. 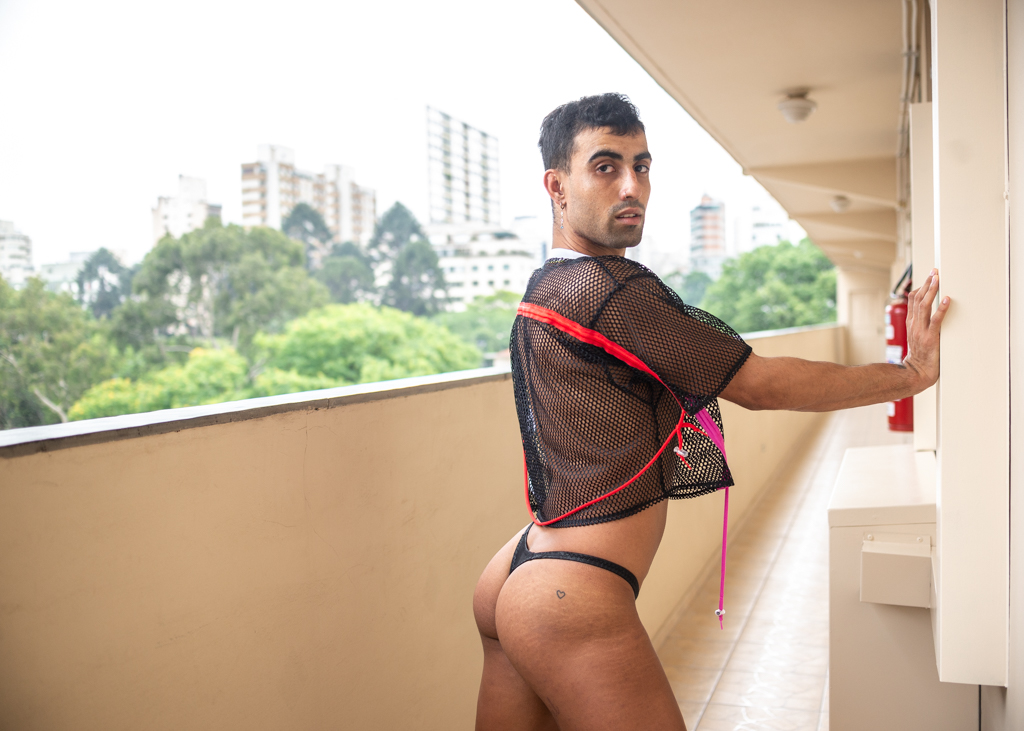 Wherever I go in the world for Elska, whoever I photograph, it’s always optional to do a nude shoot or to remain clothed. It just so happens therefore that certain editions I publish contain more nudity than others, with Northern European cities like Helsinki or Reykjavík yielding some of the least nudity of my projects, and Latin American cities like Guadalajara or São Paulo delivering the most. Indeed my trip to Brazil contained some of the most open people I’ve ever met, but not everyone wanted to bare all. Ale was one of the people who chose to keep a little hidden, but during the shoot when the subject came up about how much they’d like to reveal, their reasoning really impacted me. I remember that Ale was stood next to a window in their lounge and had just pulled their thong off, but Ale had tucked their genitals between their legs. “I don’t want to show this” Ale said, “I don’t really feel like it’s part of me.” After the shoot was over we chatted for a while and Ale apologised for being so quiet during the shoot, something I in fact didn’t really notice since I also tend to be rather softly spoken. They said they’d been suffering for a devastating bout of depression for over a week and that it was a struggle to get up that day for the photo shoot, but they’d only done it so as not to let me down personally. Ale was unsure of how they’d be represented, how masculine or feminine the images would appear. I couldn’t say how people would view the images but for me I didn’t see a man or a woman, just Ale. 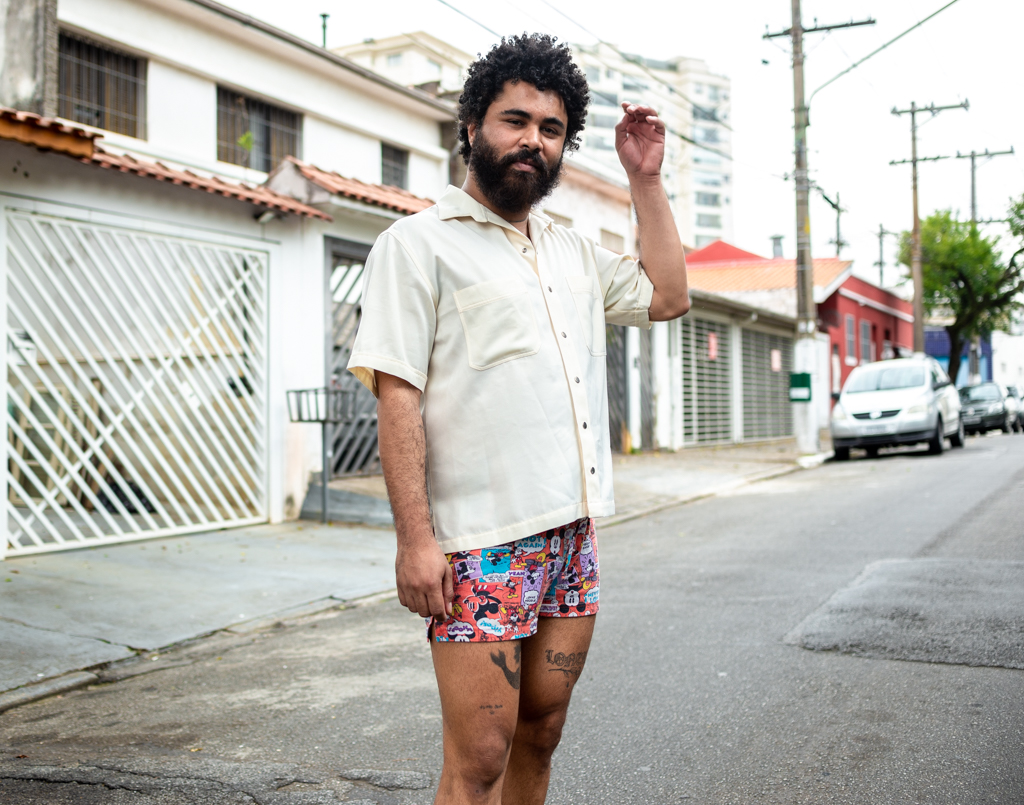 Leo was a really fun shoot to do. He was so excited to live out a bit of a fashion model fantasy with our session. Usually most of the people I meet are nervous to do a shoot outside in the streets, with strangers walking past and wondering what we’re up too, and the occasional wolf-whistles from passing cars. Leo was relishing it though, always smiling and lapping up the attention. He even roped two of his girlfriends along for the shoot, one who carried his bag of clothes containing alternate fashions for the session, and the other who alternated between interpreting from Portuguese to English, and checking periodically if his hair was looking right. It was during this shoot, on my third day in São Paulo that I truly felt I’d arrived in Brazil. All the hugs and hospitality, the offering of lunch, invites to go out later in the week, and even a gift that Leo made for me, a homemade candle in a tie-dye color scheme that had the word “armor” written on the side. Obrigado, Leo! 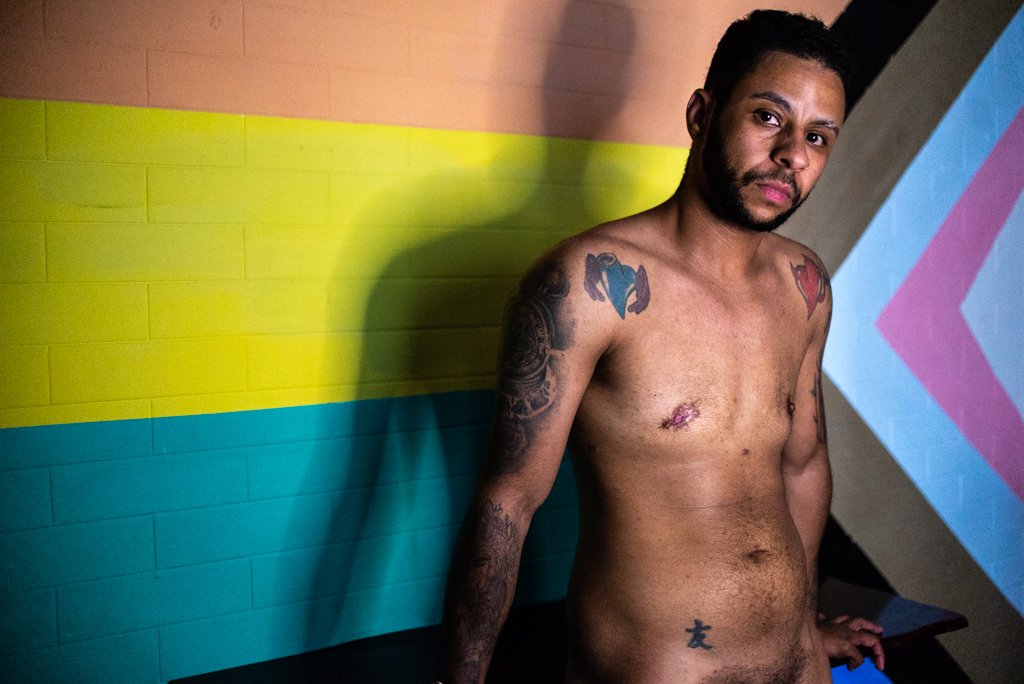 The scene was chaotic when I got to Bruno V’s place. He wasn’t answering my texts when I said I’d arrived, and there were multiple dogs barking at me from inside his front gate, making me nervous to enter further inside to ring the doorbell, especially after the incident with Mike’s dog. Because of the noise though, Bruno’s mother came out to see what the commotion was, and seeing this pale blond guy stood there, assumed I was the guy who’d come to meet her son. She invited me inside, and through a mixture of very slow Portuguese and body language, she sat me on the living room sofa and offered me a coffee. Meanwhile the dogs kept barking, Bruno’s younger teenage sister was talking loudly on her phone from the next room, and a couple of cats wandered in to threat-assess me. I played with one of them for a while and then tried to make conversation with his mother after she returned with my coffee. The language barrier was too much though, so I got one of my Elska books out from my backpack and handed it over to her, instantly then wondering if that was a good idea. Maybe Bruno never told her exactly what sort of photoshoot or project we were about to do! Honestly, she looked a little horrified, and then when Bruno finally arrived (he was late back from work) there was a concerned-sounding discussion between them, followed by a look from her that seemed to say, “Okay, I trust you, son.” After that, I thanked her for the coffee and then Bruno and I took a walk around the neighborhood, chatting and snapping photos, before returning back home for some more pics. I wonder what his mother will think when she does see the issue, I hope she’s proud. 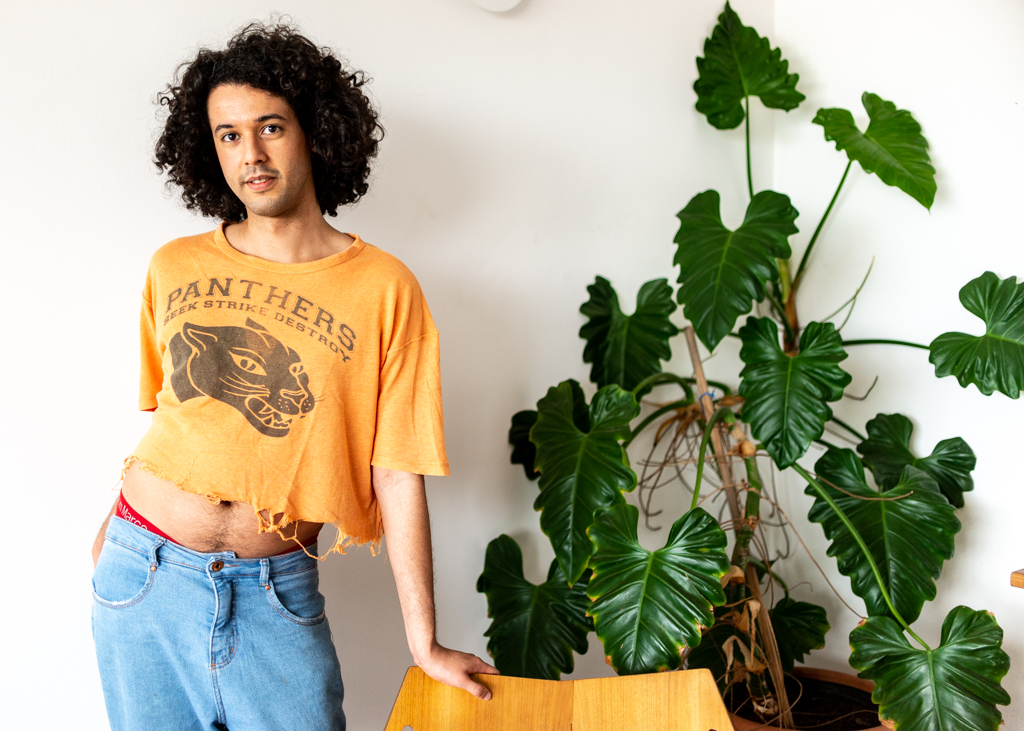 One of the best things about being in Brazil was how open and easy-going people were, meaning that it was beyond easy to find plenty of local guys to do a photo shoot and story for me. But the easy-going Brazilian mentality was also a difficulty because it was hard to get people to confirm a date or time to meet, and when they did, getting them to stick to it or not turn up extremely late was almost impossible. Bruno A was one of those guys who almost didn’t end up in the project at all, except for a bit of last-minute luck. He originally was in touch to say he wanted to take part but then failed to pin down a photo-session. Then one morning he sent me a WhatsApp and asked if I was free, that he could shoot in the next two hours between two classes at university. I was free and so I jumped on it. We did a quick walk around the Pinheiros neighborhood and snapped a few images, then went home and snapped a few more. Within half an hour it was over, and then an hour later he emailed me a story he wrote on the bus journey back home, all about the time he picked up a guy and his voyeur boyfriend at a local bar for a very interesting tryst. I later published the story in the Elska São Paulo issue alongside his photos. It was all a whirlwind for me, but totally ordinary for Brazil. This is just how you do things here. It’s definitely a culture that’s hard to get used to if you’re a buttoned-up Brit like me, but it’s also fun to try letting go and doing things the Brazilian way. 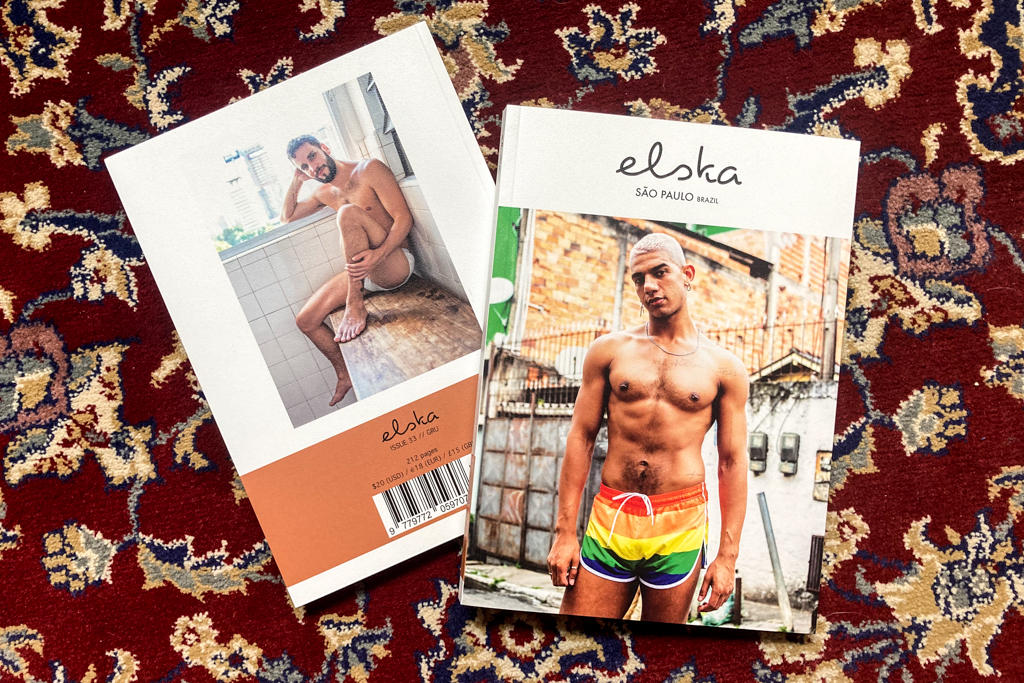 Elska São Paulo is out now in a limited edition print version and in an e-version. A companion zine Elska Ekstra São Paulo is also available.