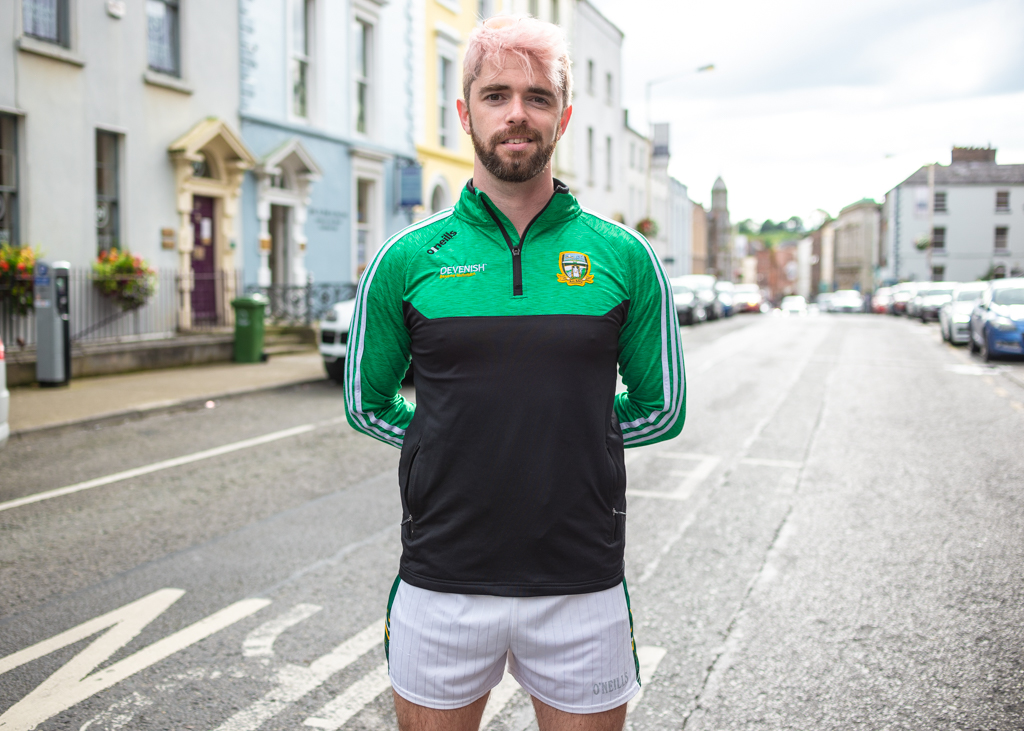 The latest documents a trip to Dublin, Ireland.

Below Liam exclusively shares with GayCities a selection of photos along with a bit of behind-the-scenes commentary about each. 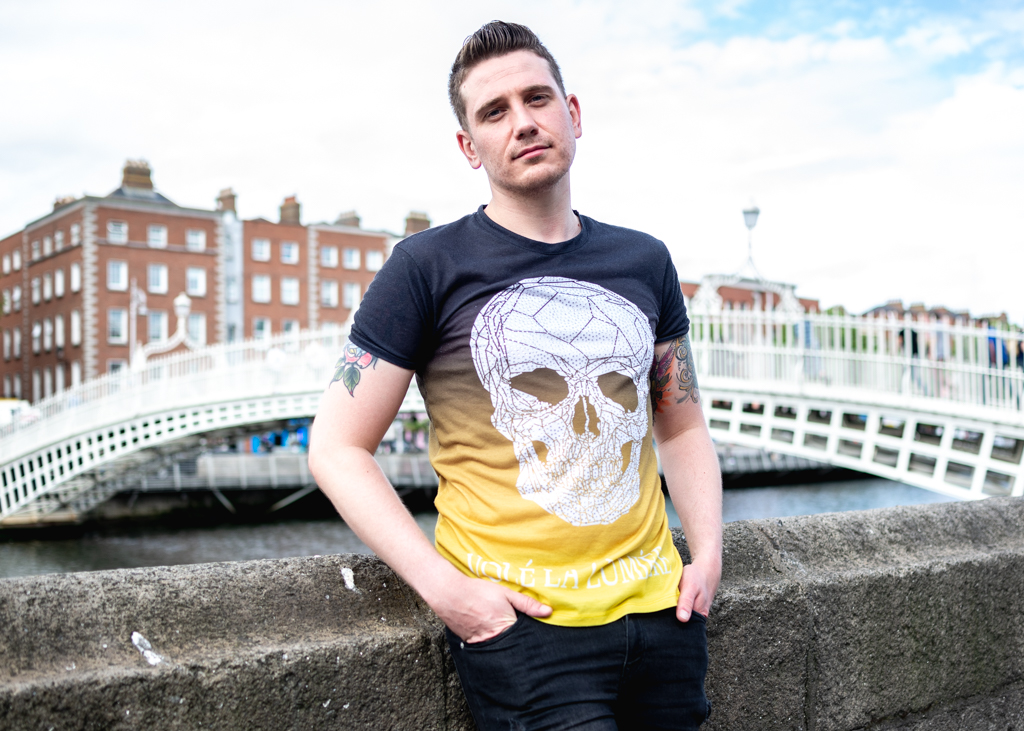 To my mind, Dublin was all about pubs, bridges, and rain. And it was with Tommy F that I decided to tick off all those boxes. We started by meeting in Temple Bar, the city’s most touristy and pub-filled quarter, and our first stop was The George, Dublin’s most legendary gay bar. Indeed I think four or five of the guys in the Dublin issue mentioned The George in their stories, including Tommy, so it was the perfect location to start. Then we wandered around Temple Bar, shooting outside some other pubs, until we made our way to the River Liffey, the perfect scene for a photoshoot. This shot of him was one of many that I thought could make for a great cover, but at the time I somehow didn’t notice the skull on his t-shirt that was perhaps too distracting for a cover image. If only I’d been paying more attention, but I think Tommy was too charming to keep me focused. 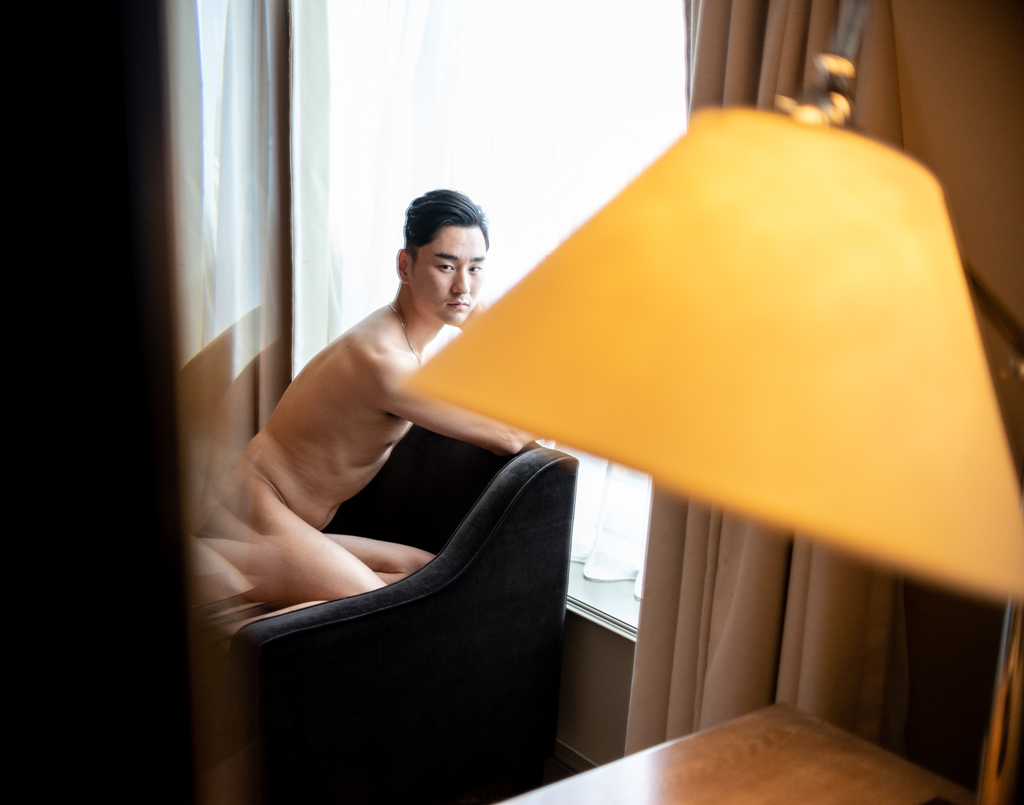 Another thing I do before visiting any city for Elska is to think about what stereotypes I may have about the culture. In the case of Ireland in general, I imagined that it would be rather conservative, and this was influenced by the fact that I’d just done a photo trip in Belfast, Northern Ireland, where I did encounter a lot of such attitudes. Whenever I shoot an Elska issue, each guy I meet has the option to shoot indoors, outdoors, or both; and if they want to remain fully clothed or get part-nude or nude. Because of my preconceptions, I assumed that the guys would be rather reserved and literally buttoned-up, but I was proven wrong immediately. My first shoot in Dublin was with Steven P who was one of the most relaxed and open men I’ve met anywhere. We actually started with a fully nude shoot and he was instantly comfortable. However, what I assumed was total comfort actually wasn’t even as relaxed as Steven thought he should be, because after later doing our outdoor shoot he told me that he’d like to return inside and do some more nude pics, declaring that he’d actually been feeling a little shy earlier. This openness made for a surprising and welcome first impression of Dublin, and although I feared Steven might be an anomaly, it turned out that he absolutely wasn’t. There was a lot more boldness to come. 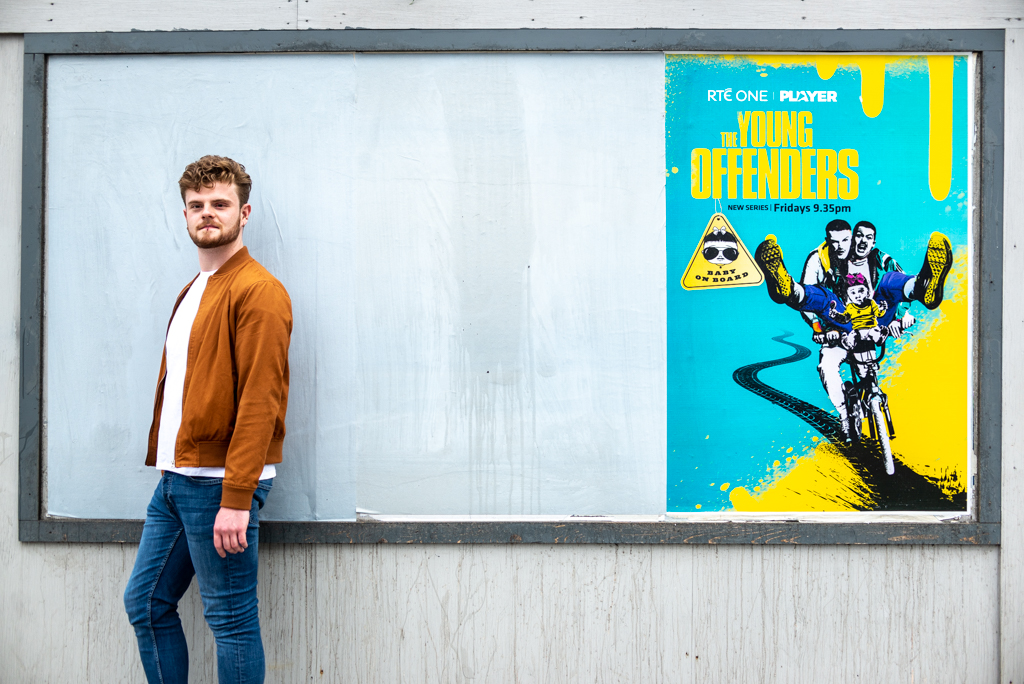 I’m not sure how most of our readers feel about this, but certainly one of the things I love about Elska Magazine is that we give all the guys the option to write their stories in the language of their choice, and then we print that original text alongside an English translation. I just adore seeing this level of authenticity, even if I can’t always understand the language there on the page. I knew that the Irish language wasn’t exactly dominant in Dublin city, but I had hoped that a few of the guys might be keen to write their Elska stories in Irish. As it happened, just three or four of the guys I met could speak Irish, but only Cathal O’F felt confident enough about his fluency to write his story in Irish. While there are significant efforts to promote the Irish language beyond just printing it on street signs and giving train announcements in it, the amount of people who are said to speak it every day fluently is under 2%. It’s a bit more dominant in cities like Cork and Galway though, so if this Elska issue is a success, I may make another issue in Ireland in one of those cities. Then hopefully more stories will be in Irish. By the way, I couldn’t resist capturing this shot of Cathal as we passed an advert for the fantastic and very Irish TV programme The Young Offenders – if you haven’t watched it, seek it out. During the weeks before I arrived in Dublin, I binged every single episode. 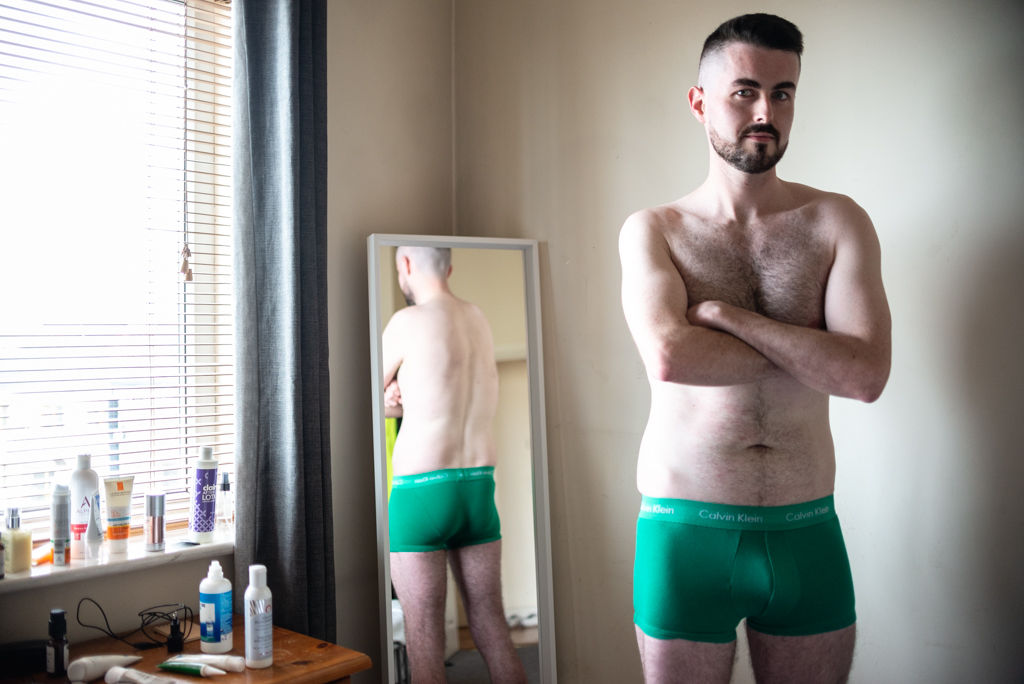 This issue of Elska was shot during a fortunate lull in the pandemic. As cases were climbing in the USA, where I’m based, infection rates were still very low in Ireland during the summer of 2020, so I returned to my native UK and then shot issues in Belfast and then Dublin. I did my very best to follow safety guidelines during the trip, even though it meant having to resist something I’d always expected to do if I ever visited Ireland, go to a pub. Although I was tempted, I owe a lot to Anthony B, a healthcare worker, for giving me a lot of confidence and reassurance. As someone who works on the front line, he explained with clarity how much things like wearing masks and washing hands really works. He also told me how proud he was of his country for banding together during this crisis, and for not making it a political issue. Indeed I felt safe too by seeing how very many local people were following the rules. I still regret not visiting a real Irish pub, but that’s just another great motivation to return to Ireland one day. 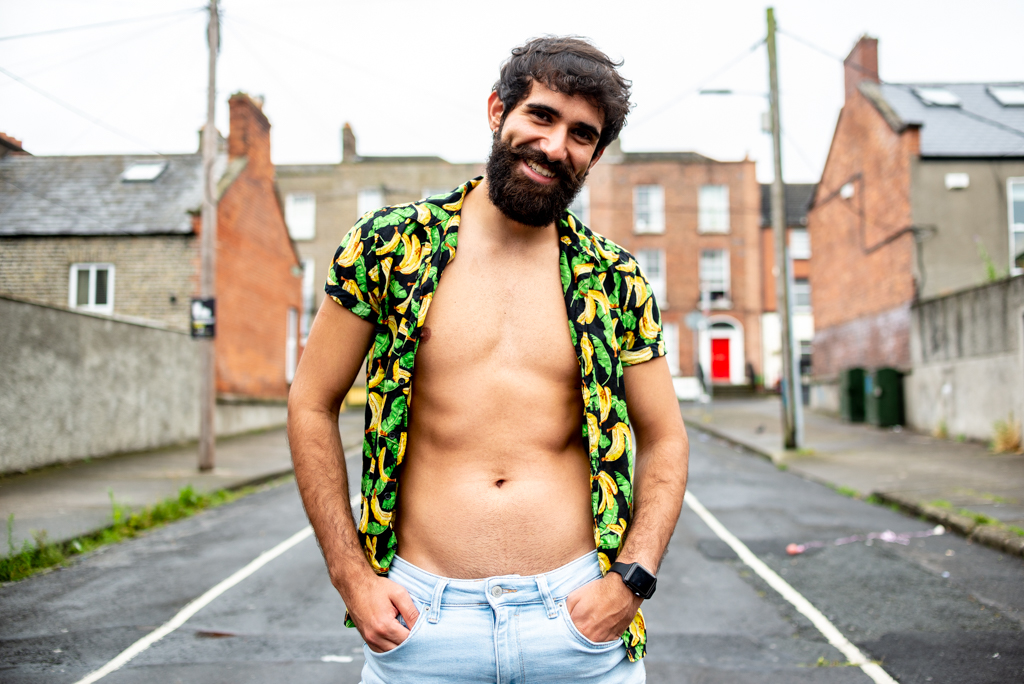 One of the things I noticed straightaway when arriving into Dublin was how cosmopolitan the city was and how diverse the population was. As someone originally from London, I tended to look at Dublin as almost a backwater, but I couldn’t have been more wrong. Even in the pandemic I could tell how exciting this city could be, and what a great variety of experiences you could have. I was also surprised to notice such a large South American community in particular. In fact four of the seventeen men I met in Dublin were originally from that continent, including two from Brazil, like Erik. My shoot with him was particularly fun, in part because he was a really happy-go-lucky guy and in part because his English wasn’t the best, making communication a fun challenge. Like in this moment pictured, I had to suggest he unbutton his shirt by miming, which he found simply hilarious… and then more hilarious when some passersby appeared and started whistling at him. Even a car passed by and honked at him. Can’t really blame the reaction though! 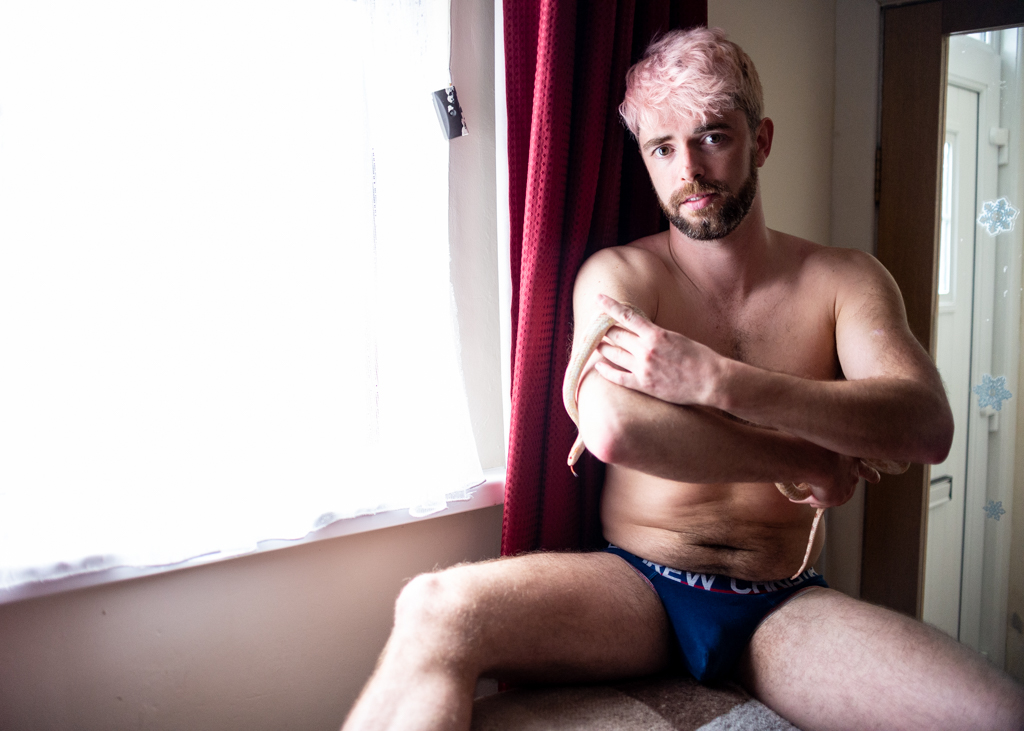 About a month before I head to a city for a shoot trip, I announce it on social media and ask for any guys interested in taking part to get in touch. At this stage I automatically assume that whoever writes in actually lives in the city I’m going to, but a few times that assumption has proved wrong. With Christopher, he actually lived in Drogheda, about an hour to the north of Dublin. In this case I couldn’t complain though, as Chris was a longtime reader of Elska who said he had a rather big collection of issues. I couldn’t let him down, could I? What I didn’t quite expect though was how nervous I’d be meeting him. As a fan of Elska, I felt a lot of pressure to make images that I thought he’d truly be happy with. Luckily, Chris was someone who was very easy to be around, and soon my nerves faded. During our shoot, he gave me a tour of Drogheda, invited me for a coffee at his favourite local café, and then even paused to pick strawberries with me when he noticed my excitement at spotting a wild strawberry hedge. In fact he was such a calm energy that by the end of the shoot when he decided to get out his pet snake for some pictures, I wasn’t even the slightest bit nervous, even though this was the first snake I ever met. For all the ideas I had of Ireland being about beer and wet weather, I left mainly with the notion of Ireland as full of the loveliest people around. 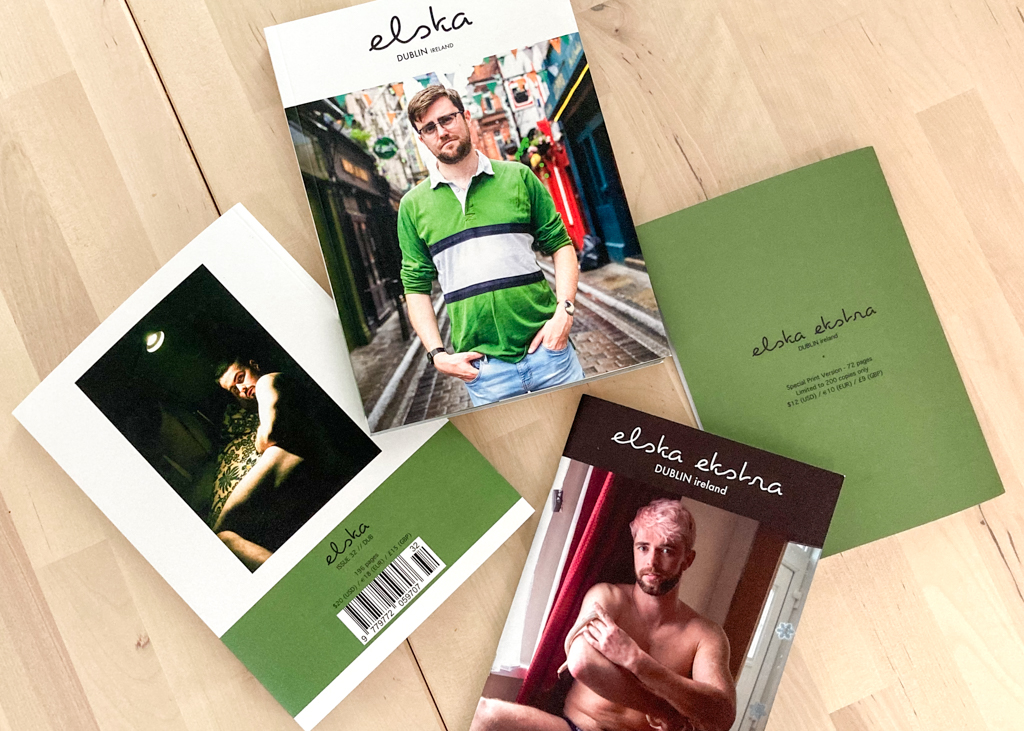 Elska Dublin is out now in a limited edition print version and in an e-version. A companion zine Elska Ekstra Dublin is also available.