Throw your own Zoom party with friends or check out some of these suggestions for New Year’s Eve.

It will be free to watch. However, if you do feel like donating, you’ll be helping out a couple of LGBTQ venues in need: Julius and C’Mon Everybody.

“I’ll also be splitting 50% of any tips/donations with @juliusbarnyc and @cmoneverybodybk, two of my favorite bars who really need financial help,” says Rod.

To launch her latest album, Disco, Australian singer Kylie Minogue performed a special, acclaimed, live-streamed concert back in November. The event was a huge success. So much so that Kylie has decided New Year’s Eve would be the perfect night to repeat the show.

It will air online for ticket holders at 9pm on New Year’s Eve in all major time zones. The perfect way to kick start a private party at home, the 50-minute show features past hits such as ‘Light Years’, ‘Love At First Sight’, ‘Light Years’ and tracks from the Disco album. Check here for ticket pricing and details on how to watch.

Beefy dance party Bearracuda is one of the best-known club brands around the US and beyond. It’s now hosted parties in 62 cities in 10 different countries. However, it’s celebrating New Year’s Eve with a virtual event featuring some of its well-loved go-go dancers, along with DJs Matt Consola and Mateo Segade. This, its 15th annual NYE bash, will run from 9pm to just after midnight PST (followed by an afterparty session for anyone who donates). Expect midnight countdowns in three different timezones, so those on the east coast and central can also enjoy. There is a “$10 suggested donation or whatever you can give.” Full details at bearracuda.com/NYE.

Eleven jam-packed hours of entertainment and shows from some of the best-known drag queens out there. Your hosts for New Year Queens will be Miz Cracker and Peppermint (New York City), Alaska and Bob The Drag Queen (Los Angeles), and Trixie Mattel and Katya (Los Angeles). It will run from 3pm (31st) to 2am (1st) Pacific time, and 6pm to 5am Eastern time. Performances and shows will come from BenDeLaCreme (in Seattle ,WA), Boulet Brothers (Los Angeles, CA), Divina De Campo (Manchester, UK), Jinkx Monsoon (Portland, OR), Manila Luzon (Los Angeles, CA) and BeBe Zahara Benet (Minneapolis, MN), among others. Tickets cost from $49.

Tomorrowland is a major, high-budget, Europe-based virtual dance party taking place over New Year’s Eve and featuring some of the biggest names in EDM at the moment. It all kicks off at 8pm local time in all time zones in the world. Expect 25 artists on four digital stages, with a countdown at midnight in each time zone. Names taking part include David Guetta, Major Lazer, Martin Garrix, and Joris Voorn. Tickets cost from €20. 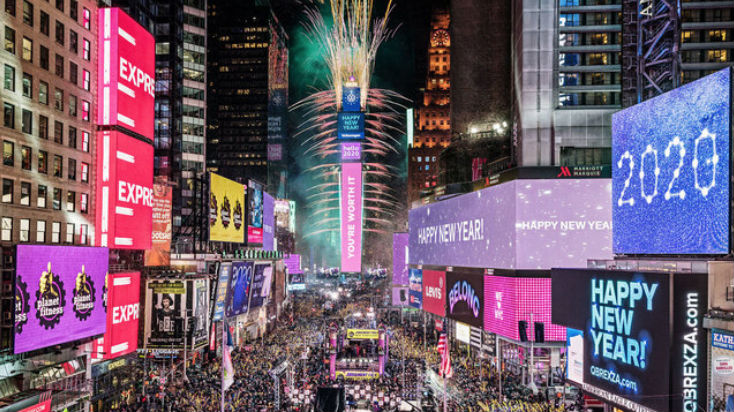 The iconic ball drop in Times Square is one of the world’s defining New Year’s Eve parties. Unsurprisingly, it will not be going ahead this year because large gatherings are not allowed. However, you can live stream for free a series of special performances from Times Square to mark NYE. The event will be hosted by Jonathan Bennett and will include Gloria Gaynor at midnight performing ‘I Will Survive’ alongside a group of essential workers. The event will kick off at 6pm ET.

Ring in the New Year ET with a gaggle of queer performers via this Zoom event from Queer and Now – an “unapologetically feminist, trans-inclusive, anti-racist futuristic performance collective.” Join host Zaddi WhörebuXXX at virtual bar O’Sliv’s, with additional appearances from Cake Blanchett, Jessie Junk, María Milagros, Melissabeth (pictured), and Mx. Nastdee, among many others.

“Get ready to hear some extra-special requests on the jukebox: stories of love, loneliness, and longing, all told through drag, burlesque, comedy, and cabaret.”

Tickets cost $10-$20, with all money raised going to the performers in the show in need of support. The broadcast starts at 7.30pm EST.

In normal times, Brooklyn’s House of Yes is famed for its extravagant, themed parties, which offer a mixture of circus performers, burlesque, drag and plenty of dressing-up opportunities for a very mixed crowd of party-goers. It’s currently closed, but it will be marking New Year’s Eve with what it promises to be weird and wild digital party, with special guest DJ Eli Escobar spinning the sounds. The event will commence at 9pm ET, and anyone can join the fun from around the globe. It will all take place via Zoom and dressing up is encouraged. The event is free but donations are welcome.

Are you a fan of classic house music? United We Stream is an award-winning digital platform that will be celebrating New Year’s Eve by teaming up with several collaborators to present the ‘Hacienda 24 Hour House Party NYE’. The Hacienda was an iconic club in Manchester, northern England, which ran from 1982-1997.

The event will run for 24 hours, from 5am ET on December 31, allowing all time zones to enjoy it. DJs will include Carl Craig, Danny Tenaglia [above], and David Morales. There will also play the 2013 NYE set from the late, legendary, gay DJ Frankie Knuckles, recreated in a virtual Hacienda. Live performances will come from Inner City (‘Good Life’). The stream will be free but those watching are encouraged to donate. Details via the Facebook event and United We Stream.

Acclaimed London DJ and podcaster Phil Marriott will be throwing a five-hour live stream on New Year’s Eve. “NYE: You + Me, a marathon 5-hour DJ livestream celebrating the best music from five decades,” he says. The party kicks off at 8pm London time on Zoom, and if you’re a fan of a particular decade, you can tune in for that hour (the 70s at 8pm, 80s at 9pm, and so on). The event is free (but bear in mind it take place during the UK time zone).

Similarly, another noted London DJ, Fat Tony, will be spinning live via all his social media platforms from 9pm from new gay bar, The Arch Clapham. More details via Fat Tony’s Facebook page.