To help accomplish this mission, we’ve assembled America’s Mightiest queer cosplayers to strip down and spandex up. As part of our GayCities weekly Cosplay The Vote series, we set out to talk to some of our favorite gay geeks across the country, serving up their best cos-lewks in order to remind everyone to get their sweet little behinds to the polls on November 3–if they don’t vote earlier by mail.

This week, we kiki’ed with Dan William, aka Parthenon, an alum of SyFy’s Who Want’s to be a Superhero currently living in Orlando, about his home state of Indiana,  working with Stan Lee, and the quirkiness of the West Coast Avengers.

(For more heroic hotness, be sure to check out our Cosplay the Vote interviews with Courtney Grant, Paul Charles, Sky Fernandes, Kjeezy, and Cori Reese.)

Why is this election important to you?

We can’t do another four years of Trump. Especially being LGBTQ. I’m originally from Indiana. Pence makes me sad I’m from Indiana, for all the bills he did when he was Governor. It made me so upset when Trump picked him as his Vice President. Last time I was shocked Trump won that election. This year I’m going to make sure it doesn’t happen again.

You mentioned Pence and LGBTQ rights. Why do you think it’s so important for gays to vote en masse?

I think the LGBTQ community tends to not be very good voters. I’m not sure why. They may not take the time. I’m hoping this year they will, because it’s super important that your voice is heard and you are part of the community.

Besides gay rights, what is the most influential issue that is affecting you this election?

The pandemic and how it was handled is the most personal thing. I have a father who is really high on all of the high-risk lists. To visit him, I would have to sit outside the house and talk to him 12 feet away through a screened-in porch. I didn’t get to hug him for like ever. He missed that human touch. If we had a unified response from the top down I feel like we’d get through this much faster.

We spoke a bit about your home state of Indiana, but you are currently living in Orlando. Florida is always a huge battleground state. What’s the biggest issue facing Florida in general, and Orlando specifically?

Orlando is suffering from unemployment more than anything else. We’re a tourist town, and nobody is traveling or going to theme parks. One-third of my friends are currently unemployed. They are waiting for stimulus checks that aren’t coming. It’s getting scary.

I assume Orlando is still in quarantine?

Yup. They’ve loosened up a bit. They’ve reopened some restaurants and bars. But theme parks aren’t opening a lot, because no one is traveling. One of the major gay bars, an icon of Orlando, is Parliament House. Yesterday was its last day. It’s closing because of the pandemic and they couldn’t make ends meet.

On a lighter note, you were on the show Who Wants to Be a Superhero with the late, great Stan Lee.

He was delightful on every level. He was the same on camera as he was off. He’s who you want him to be.

So most of our Cosplay the Vote interviewees cosplay as established superheroes. You are unique in that you got to be your own hero, Parthenon. Where did that character originate?

The character came from a lot of my youth. I’ve been a comic book nerd since I was 9. I have combined a lot of my favorite people and powers into one giant story and rolled my character around it.

Back when you were 9, there wasn’t a lot of queer representation in comics. To what kind of comics did you gravitate as a gayby?

I loved the Avengers more than anything else. And I always liked the weirder ones, so I loved the West Coast Avengers.

Yes! Okay, now I like you. (Laughs). That’s what I started reading as a kid. I read the West Coast Avengers Annual where they are playing baseball and then taken by the Collector and have to battle in space. It’s a crazy series. I loved science so my favorite was Ant Man/Giant Man. I gravitated towards him.

As for gay representation, there really was none when I was growing up. The closest we had were the X-Men, who were different but not really more than that.

So, why do you think it’s important to have gay representation in the 21st century?

Everyone wants to see themselves reflected, and everyone wants someone to look up to. If you have that it becomes more commonplace, and it’s not taboo. It doesn’t matter but in a good way. Do you ever see Schitt’s Creek? They handle it so well. The main character David is gay, but it’s never an issue. 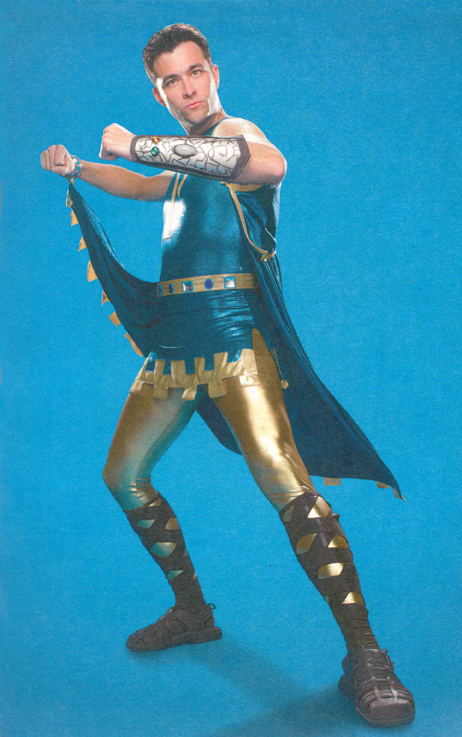 I want something that seems like the normal I knew before and not the new normal. It’s never going to get back to how it was. But I’d like to go out and meet my friends for drinks. I want there to be stability in the country. And I want there to hope more than anything else. In 2020, anything that could possibly go wrong did. Like, what else could happen? Oh, have you heard about murder hornets? (Laughs)