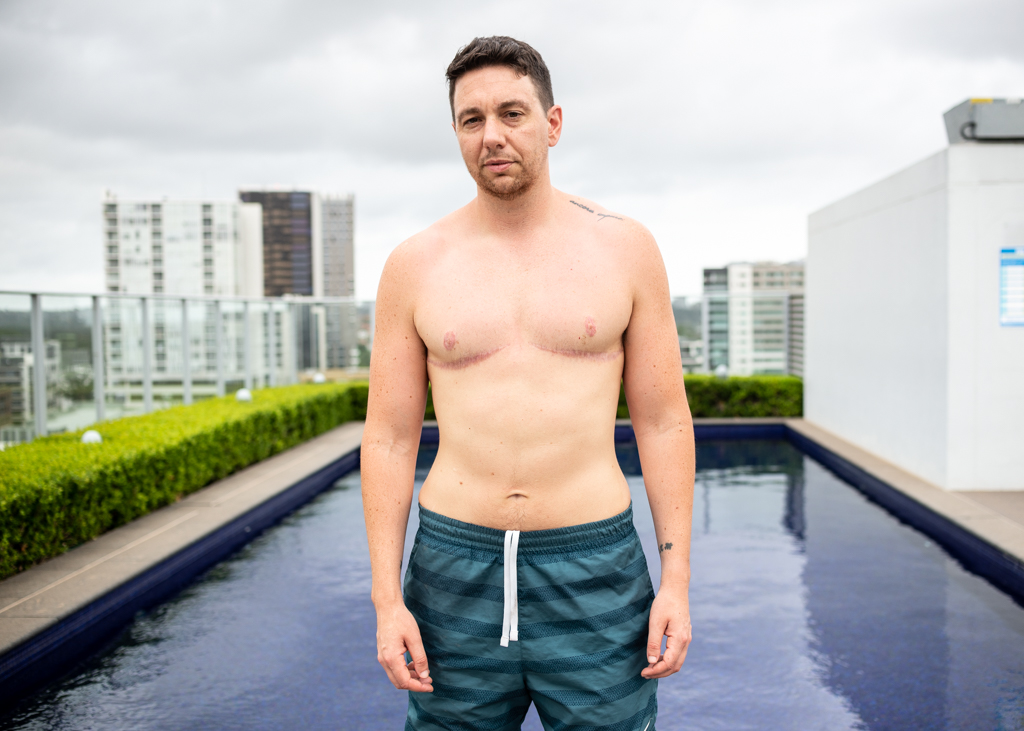 We can’t wait until travel resumes. In the meantime, here’s a chance to travel virtually to Australia for close ups of the guys of Sydney.

The photos for this article were all shot pre-COVID in Sydney, Australia. 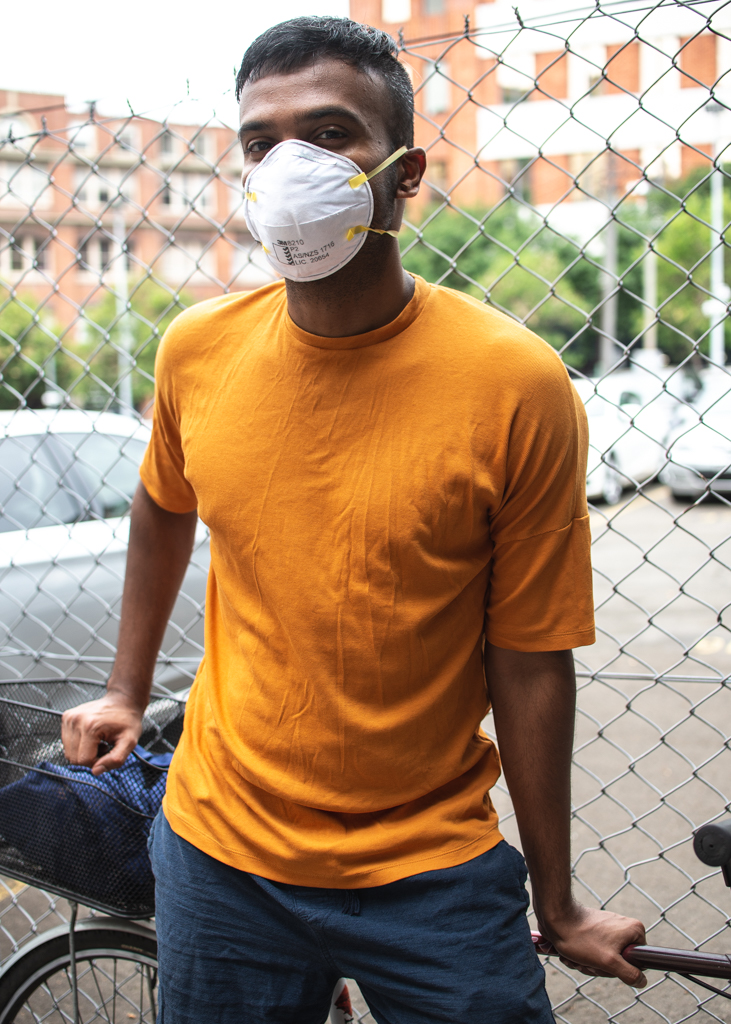 Gary taught me about Sydney. Before I arrived, I knew that it had a positive reputation as one of the gayest cities in the world, but that it also had a negative reputation as being home to a lot of racism. Gary inspired me to go out there and be more of a journalist. So I started contacting and chatting with a lot of Aussie POCs and discovered that many feel unwelcome in Sydney. It was so upsetting, but if there is a silver lining to such a terrible situation, it’s that the white men I spoke to about it were also very aware and concerned. Gary does belong there, and it really should be somewhere that’s welcoming to all queer people regardless of where they or their ancestors were born. 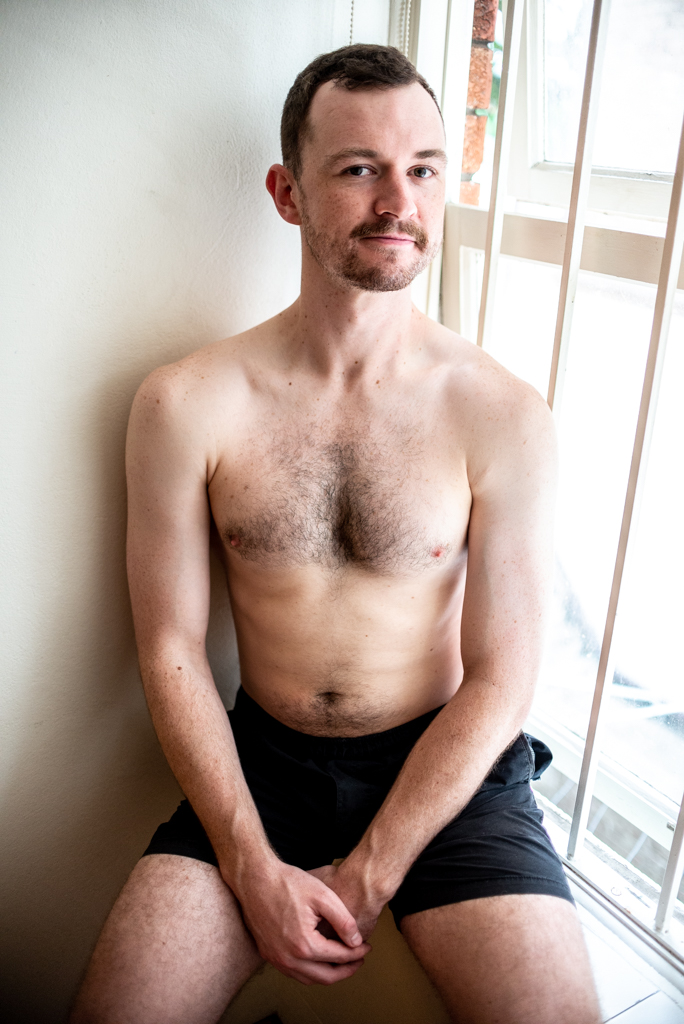 My arrival in Sydney was quite surreal. Not only was I groggy after a very long string of flights, but the air was a strange brown-orange color due to a raging season of wildfires (this issue was photographed in late January, 2020). But somehow, as if by magic, rain poured down after I arrived at Stephen’s place for the first shoot of the week. With that rain came a change in the colour of the light to something more cool and flattering; and following the rain the whole city was covered in a thin layer of dirt. Many people had been wearing masks to protect from the ash in the air, and this rain gave us a few days of easy breathing. Little did Sydneysiders know that only a few weeks later would they need to get their masks out again, but this time not because of ash but because of Covid-19. When I look at this picture of Stephen though, I remember this brief oasis of normality and like everyone else hope to get back to that feeling soon. 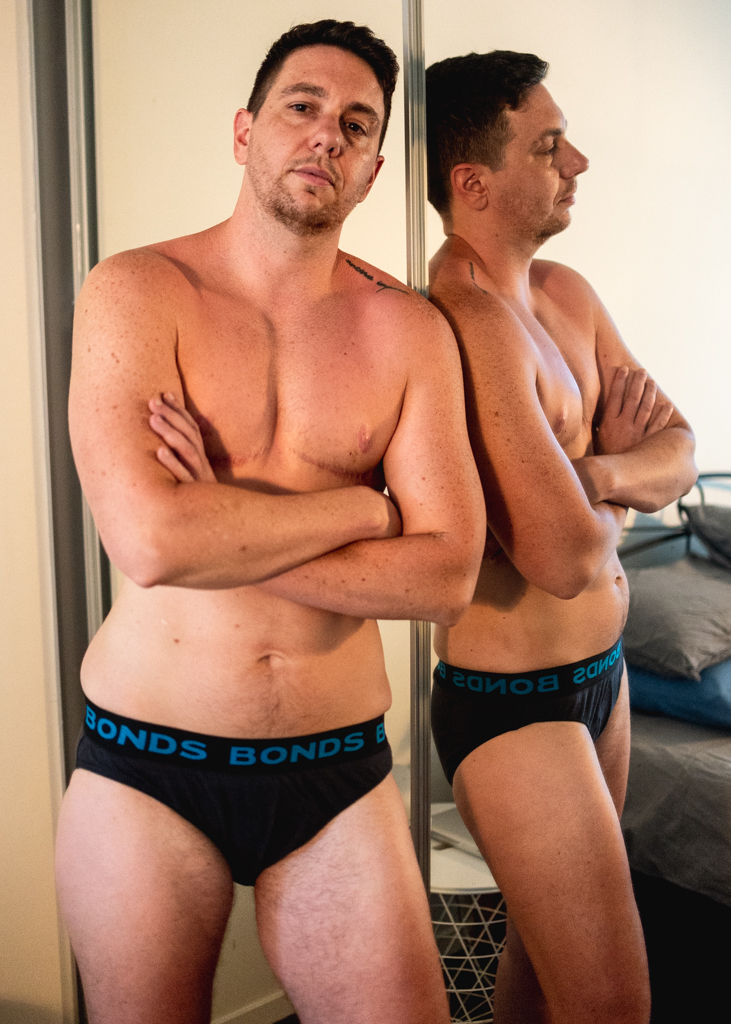 One of the most fun aspects of doing my job, other than the travel, is meeting so many people. In every city I visit, I usually meet upwards of a dozen local men who I then spend a few hours with, walking around their neighborhood, basically just hanging out but with a camera. Rhett was one of those guys who I just got on with instantly. I can be quite shy, but he cracked my shell instantly, and soon we were bantering and joking with each other. The only problem was that at first, I felt a little uncomfortable about how open I could be. That’s because he was just so masculine that it made me feel a bit like I was back in high school with the jocks and bullies. So I just told him about my first impression, and he laughed – “Don’t worry, I’m gay.” That instantly put me at ease, and also reminded me that I need to snap out of being nervous about straight guys, or anyone. If anyone has a problem, I should be unafraid to defend myself. Rhett told me about his own struggles as a trans, gay man, and he really inspired me to be more fearless. 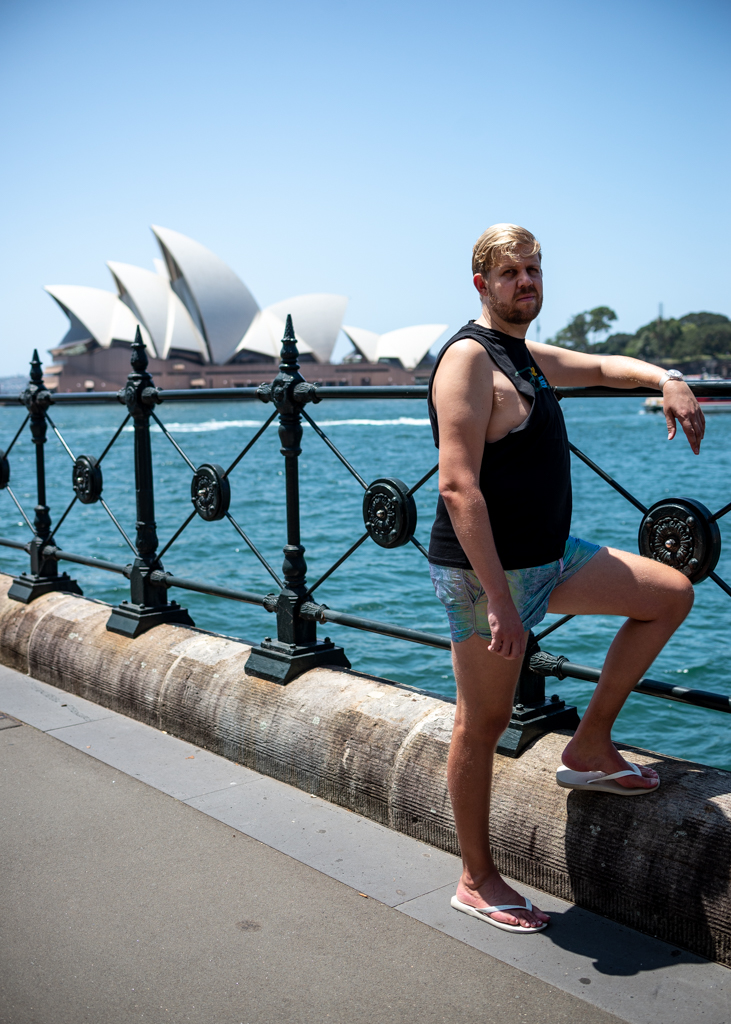 In most cities I visit, I tend to avoid tourist areas. When I did an issue in London, there were no shots of Big Ben or Tower Bridge; when I did an issue in Los Angeles, there was no Hollywood sign in the background of any pictures. Instead, I just like to focus on everyday ‘authentic’ neighborhoods, but in Sydney I just couldn’t resist doing one clichéd setting. That’s because I just really wanted to see the Sydney Opera House, and since I only had four days in the city and fourteen photoshoots to do, I’d have no time for sightseeing unless I combined it with work. Dan was gracious enough to drive me over to The Rocks, and then we did some shots with the Opera House, by Circular Quay, and under the Sydney Harbour Bridge. The best, or most interesting, shot of all though is one I can’t share here, it’s in the print mag if you want to see it. In that pic, Dan is sitting on a bench under the bridge, and something sort of pops out of his short shorts. I warned him, but he said he didn’t mind if I took the photo anyway. I shouldn’t have been surprised at his attitude – he wrote his story about being a keen nudist after all. 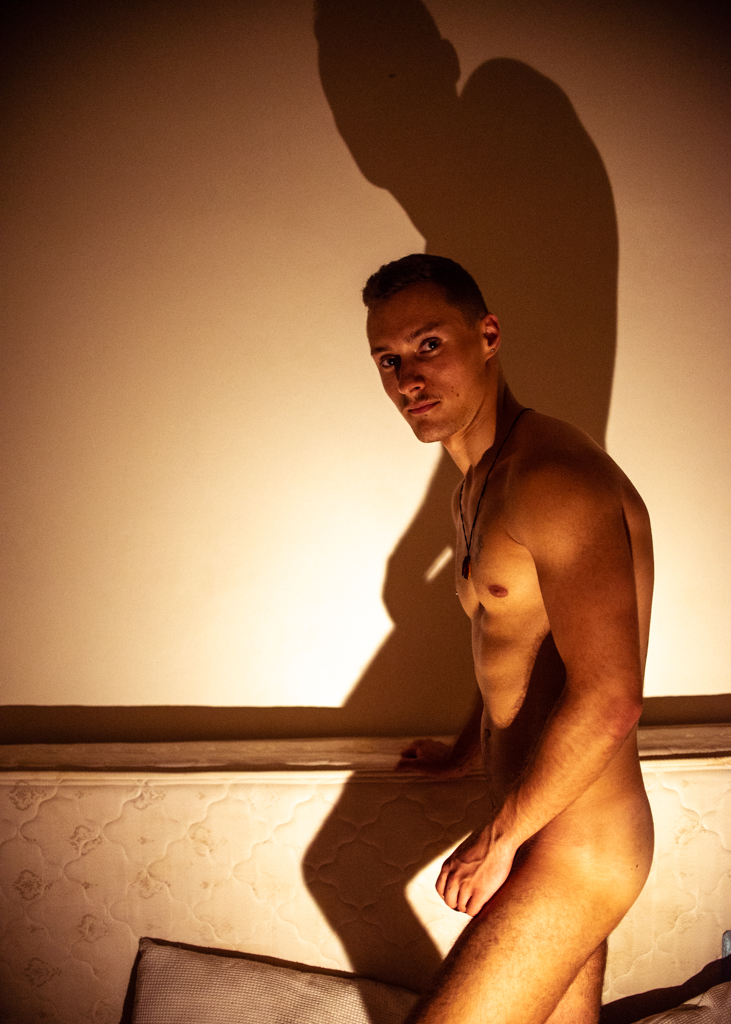 With Rhodes, we met first in the heart of Sydney’s gayest district, Darlinghurst. There we grabbed some shots in and around the main drag, Oxford Street, before going back to his place for the second part of the shoot. This part is often the most challenging because you don’t know what a person’s home will be like – if it will be big, bright, or inspiring. In Rhodes’s case, he had a really small flat, basically just one room with a washbasin and a single small window. It was going to be a tough job, but we decided to just black out the window, turn all the lights off, and use a table lamp to cast a spotlight on him, creating shadows while he moved around on the bed. Despite the initial worry I had when I arrived at his home, it turned out to be one of the most fun and interesting shoots I’d ever done. 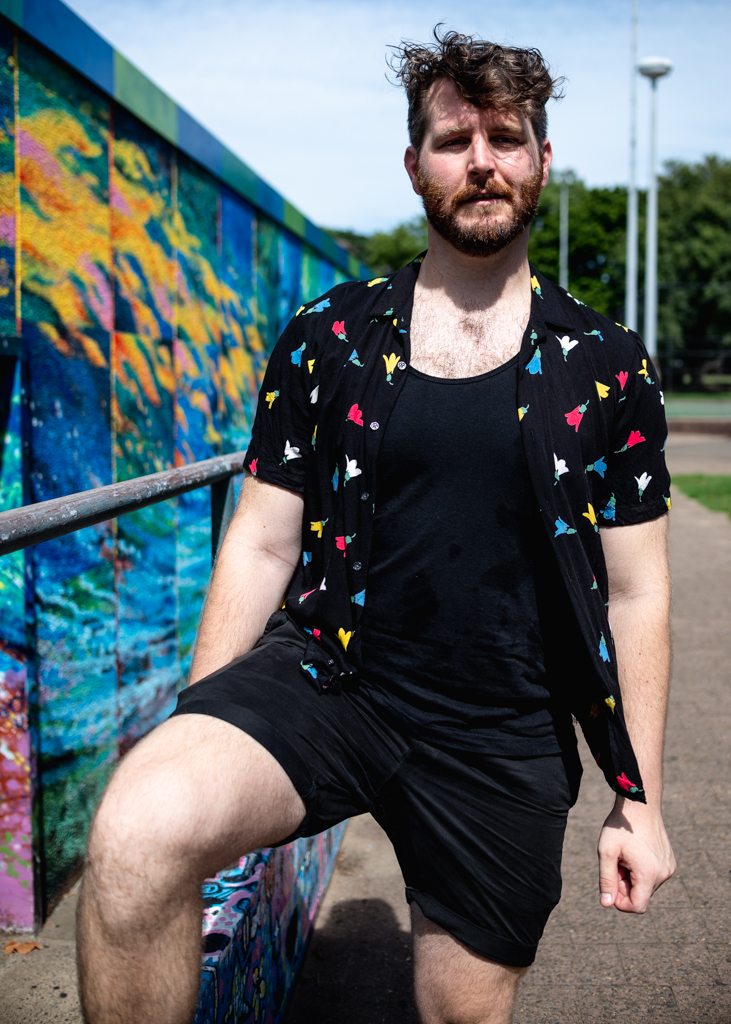 It was unbelievably hot in Sydney, and my shoot with Richard was the hottest – just over 40 C (104 F), even at 10 am when we met. This was at the end of my week of shooting, and it was also the end of a brief respite before the wildfires reignited (my last shoot, later that evening with John A created some of the ‘ugliest’ outdoor images everywhere, not because of him but because of the dirty sky, which smelled strongly of burning and made it difficult to breathe). Anyway, I remember rushing our photoshoot, at least the outdoor part, and that as soon as we got to Richard’s flat, he turned the fans on and I stood in front of one to cool off while he fetched me something cold to drink. I ended up blocking that fan for myself throughout the shoot, while Richard kept cool by getting undressed, definitely one positive side to doing a nude photo session! 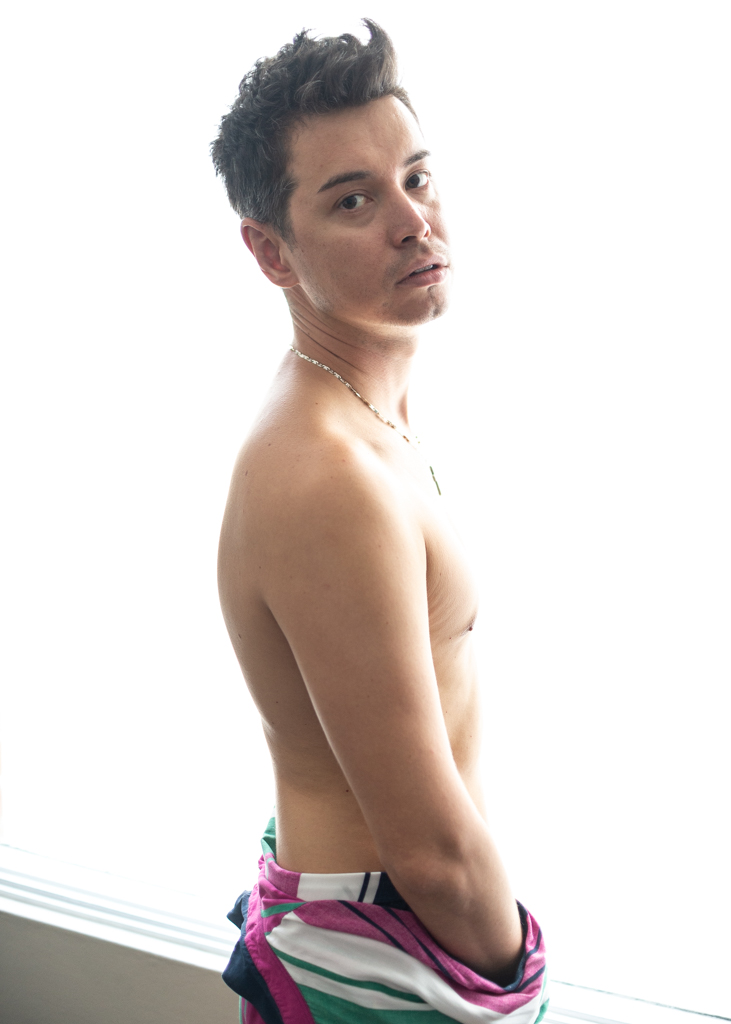 Whenever I meet someone who’s lived in other countries, I get so excited and you can’t shut me up. Timur was originally from Kazakhstan, but also lived in Moscow and Shanghai before finally settling down with his new husband in Sydney. Naturally, I was asking for advice about doing an issue in Elska in Almaty and beyond. He didn’t really have a lot of advice for Kazakhstan though, but he knew plenty of guys in Russia and China who he knew would love to take part. If only I could actually travel again! I don’t know when I’ll be able to shoot another Elska, but I will be waiting impatiently until I can, and I look forward to presenting more local boys and local stories from more cities soon.

Elska Sydney is out now in a limited edition print version and in an e-version. A behind-the-scenes companion zine called Elska Ekstra Sydney is also available from the Elska website.