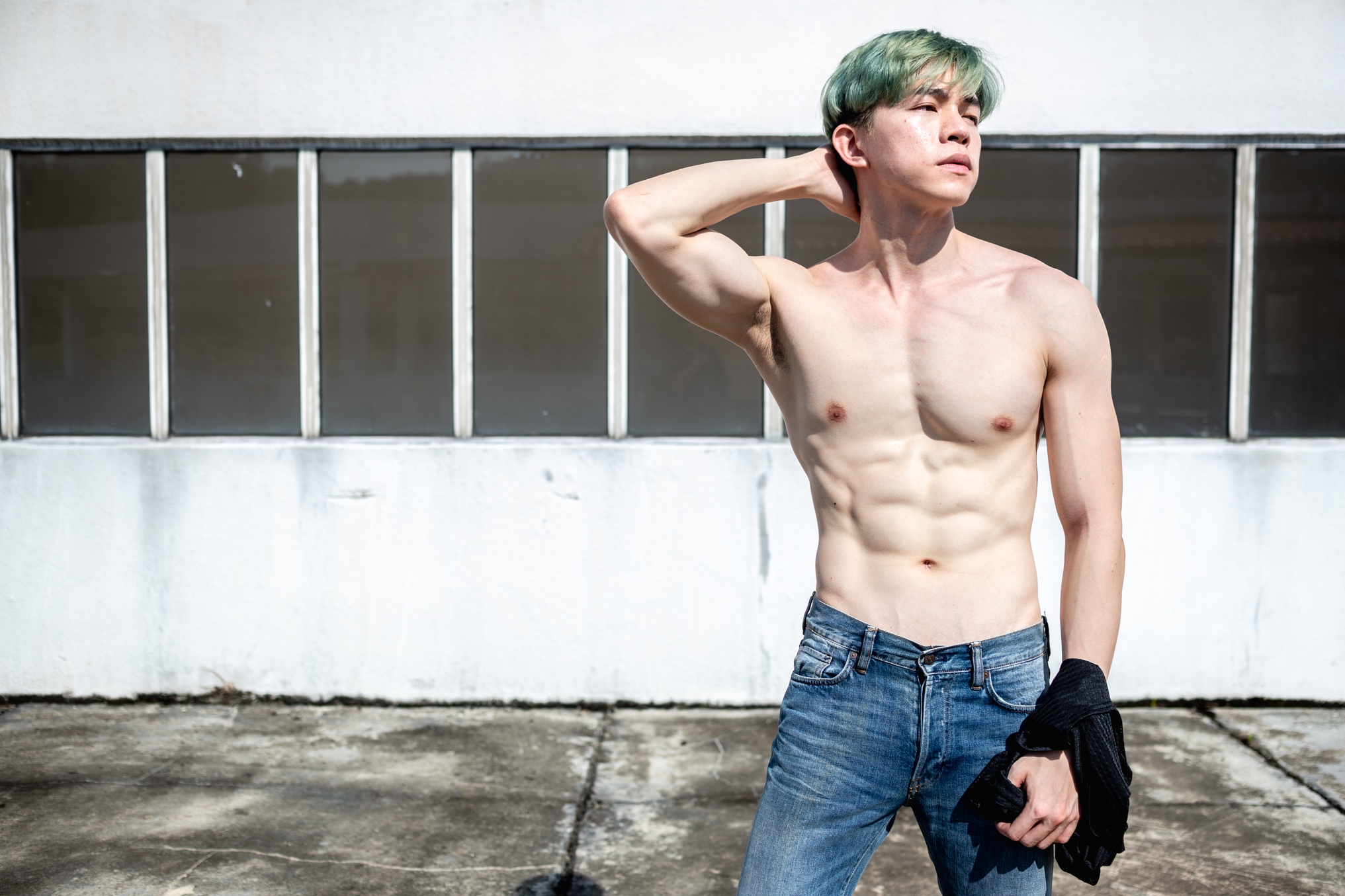 We can’t wait until travel resumes. In the meantime, here’s a chance to travel virtually to Malaysia to meet the men of one of Asia’s most diverse and vibrant cities, Kuala Lumpur.

The photos for this article were all shot pre-COVID in Kuala Lumpur, Malaysia. 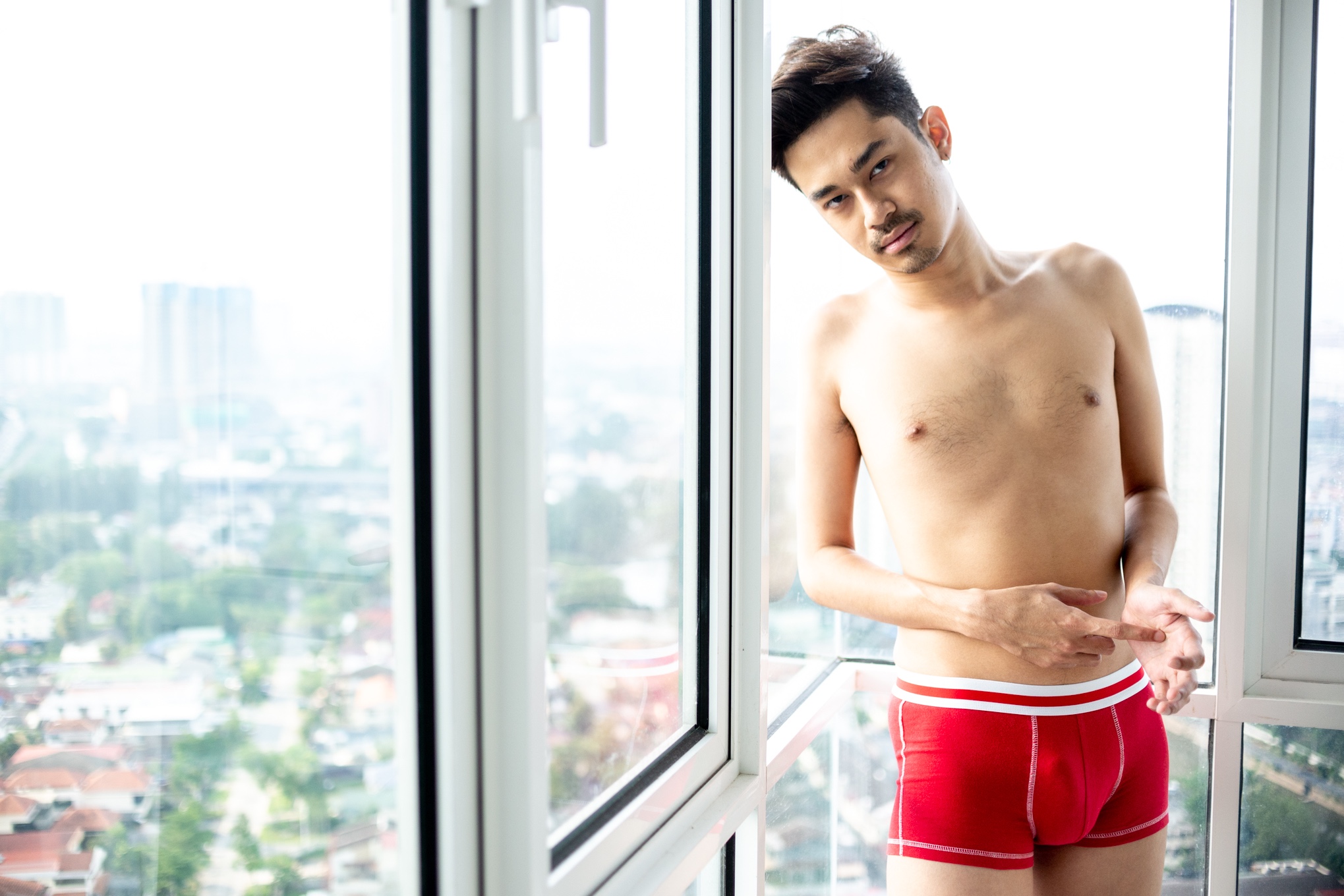 Before coming to Malaysia, my only sense of the place was that it would be rather socially conservative, that it was a Muslim majority country where homosexuality is illegal. Yet despite this, there is a growing desire in the LGBTQ community to be seen and make a space for themselves. Perhaps this is inspired by the famously gay-friendly society of neighboring Thailand, by the burgeoning equality movement in southern neighbor Singapore, or perhaps even by the exploding gay culture coming from Taiwan. So even though I expected that it would be hard to find guys willing to take part in a photoshoot, it wasn’t hard at all, and most of the guys I met here felt empowered to be out. Sam was definitely one of the bolder ones too, contributing a rather explicit story for us about visiting a gay sauna and even stripping to his underwear outdoors for part of our shoot. I also took a few shots where he impressed us with an impromptu deep-throating of a banana, but perhaps these images are best left to the imagination. 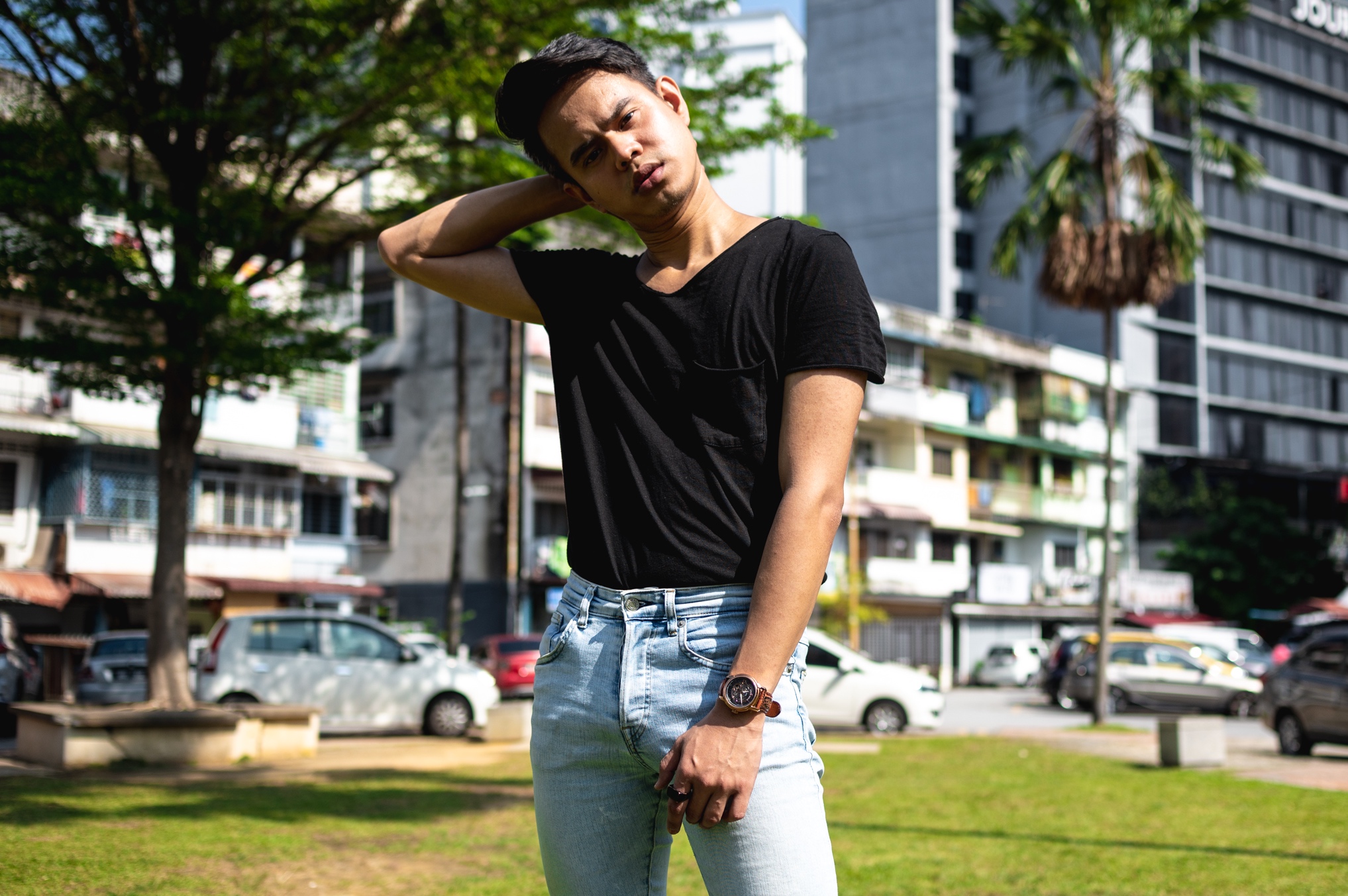 The first guy I met in Kuala Lumpur, Khairul, taught me a lot about one major factor of KL culture, which is shopping. Like Singapore to the south, the city boasts some fantastically large and glitzy shopping malls. With most of the guys I meet for Elska, I ask them to choose the location, which sometimes is their own neighborhood or sometimes a place they like to hang out in. Because Khairul loves shopping and fashion, he wanted to meet at Bukit Bintang junction, near his favorite mall, Pavilion. Shooting inside a shopping center isn’t ideal though – the crowds, the bad lighting, the security – but we definitely took a lot of air-conditioning breaks in various malls. Even if you’re not a shopaholic, you’ll appreciate being able to escape the tropical heat outside. 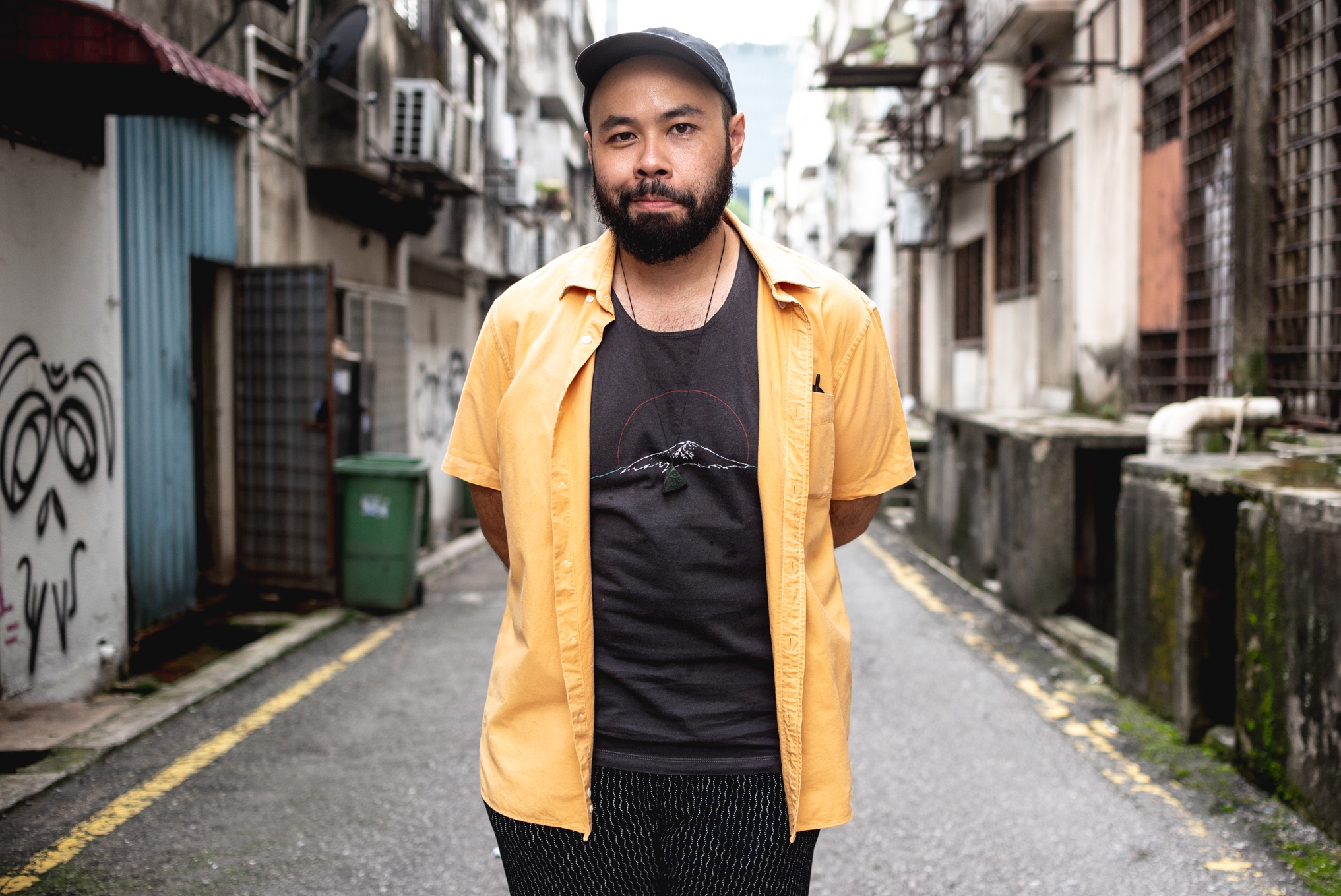 Another thing that Kuala Lumpur is famous for is its cuisine. With a population that includes large Malay, Chinese, and Indian communities, a food culture that includes and melds elements of each is part of what makes this city so special. My favorite food experience in KL was when Muizz took me to a mamak. This is a sort of casual diner, usually with open-air seating cooled by fans, and a mainly Indian style of cooking served cafeteria-style where you ask for a bit of whatever you want. A bit of spicy curry, a fried chicken leg, some rice, and maybe an egg on it somewhere – that sort of thing – and you eat with your hands. You can’t get more local than that. After lunch, we shot a bit more and then finished with a posh coffee at one of many local cafés run by Malaysians returning from years living in Australia, home to one of the world’s best coffee cultures. 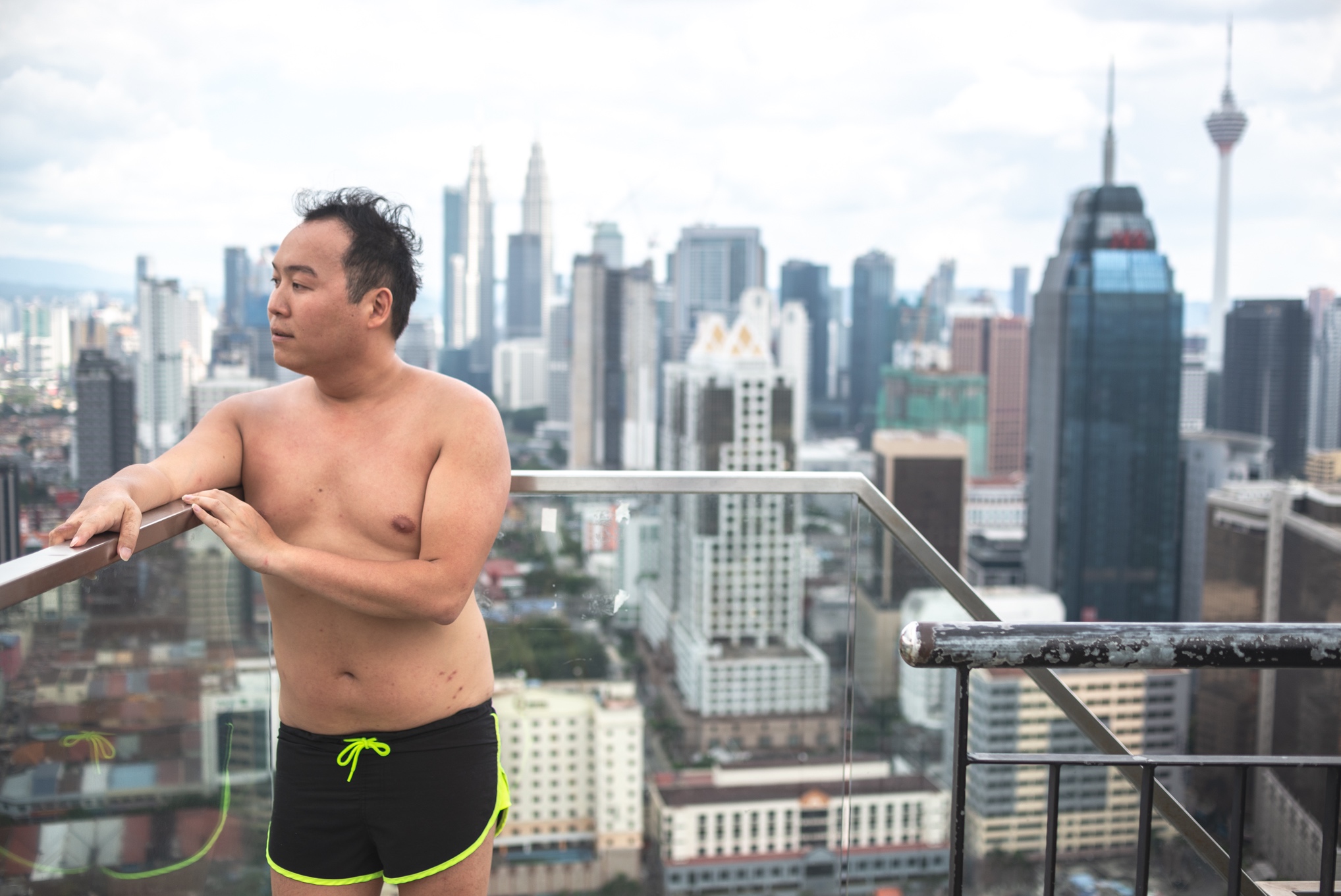 A third thing that Kuala Lumpur is famous for is its skyline. For some years the city boasted the world’s tallest structure, the Petronas Towers. A lot of my shoots in the city featured various skyline backdrops, but my favorite view came during the shoot with Yang C. To get this image he invited me to the pool on the roof of his apartment building, and it was magnificent. If only I brought some swimmers with me, I’d have loved to jump in and cool down for a while. Next time… 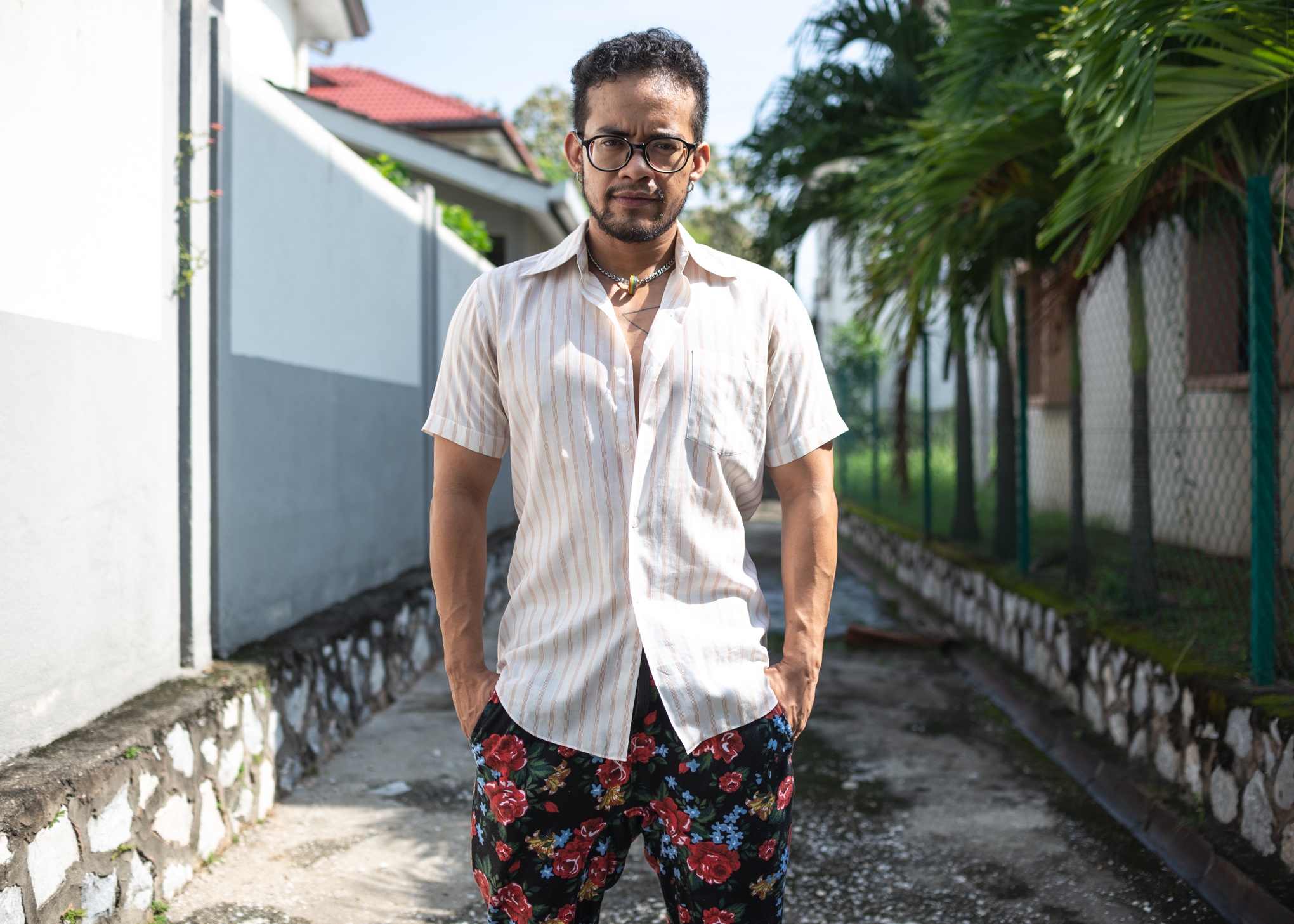 The guy who is on our cover for the Kuala Lumpur issue is Gems, and his cover was chosen out of five different options through a vote among our subscribers. I gave his cover the vote too, in part because I was hoping to have a trans man upfront (it’s our second trans cover, after Elska Toronto). Even though the public is becoming more and more aware of trans issues, trans people are still too often seen for their bodies and not as actual people. In the story Gems contributed to the issue, he explains how guys online always message him simply to ask about his “equipment,” as if that is all he is. So as much as visibility is important, it’s also vital that we bring respect and understanding to accompany that visibility. 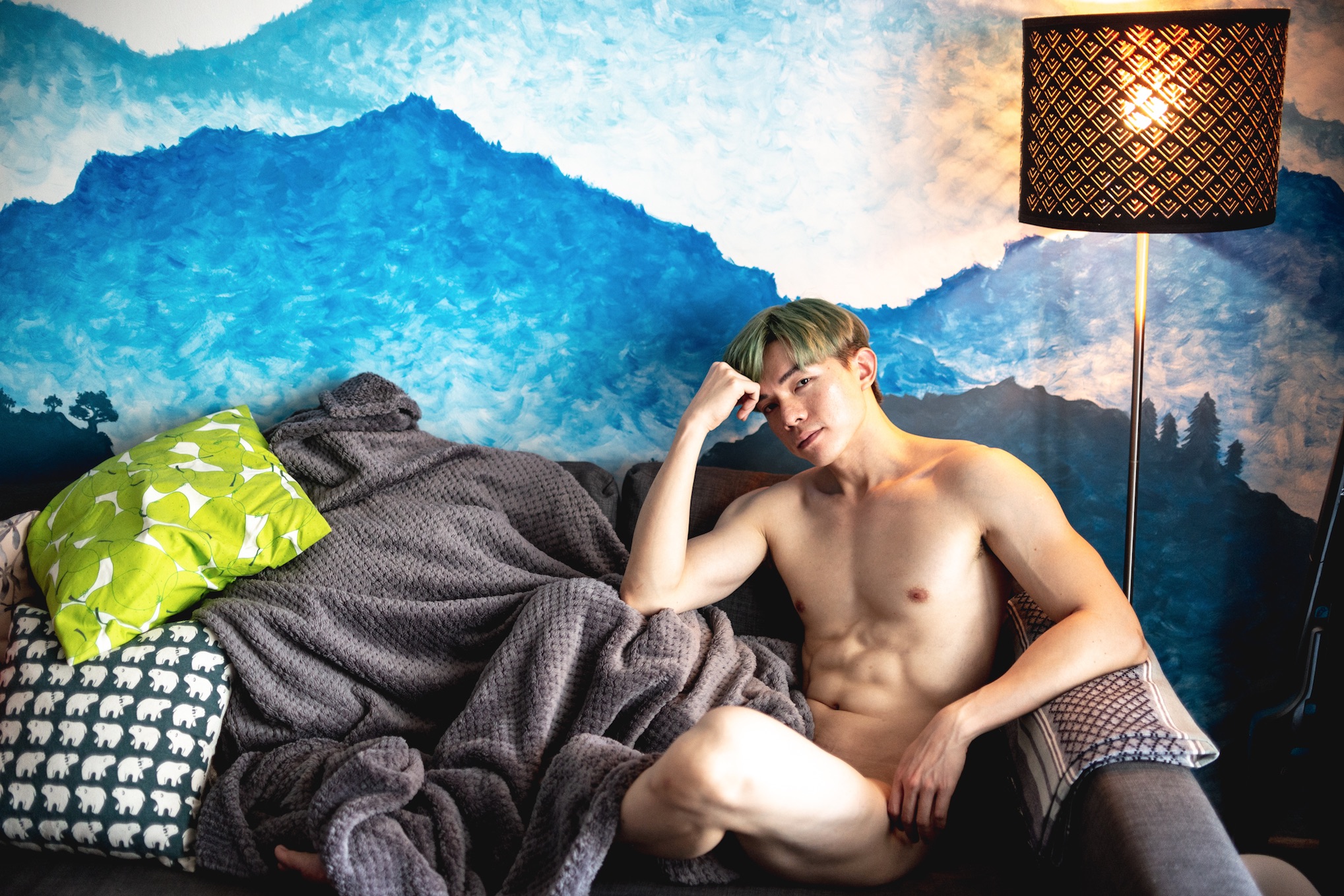 The last shoot I did in KL was with perhaps the friendliest guy I met on the trip. J-son was such a gentle sort, easy to talk to, and keen to chat about one of my favorite topics – cats (by the way, a shot of one of his two cats appears in the issue). After our shoot, we took a walk to a local bubble tea place to chat some more, and afterward, he invited me out on a road trip to visit the Batu Caves, a stunning Hindu temple carved into a rock cliff. I, unfortunately, wasn’t able to accept his invitation, but we’ve stayed in touch and hopefully, I can one day return to KL and take him up on the offer.

Honestly, I wasn’t looking forward to visiting Malaysia, having feared that it would be a difficult trip rife with homophobia, but instead, I found so much kindness, curiosity, and real energy to make me fall in love with the place. 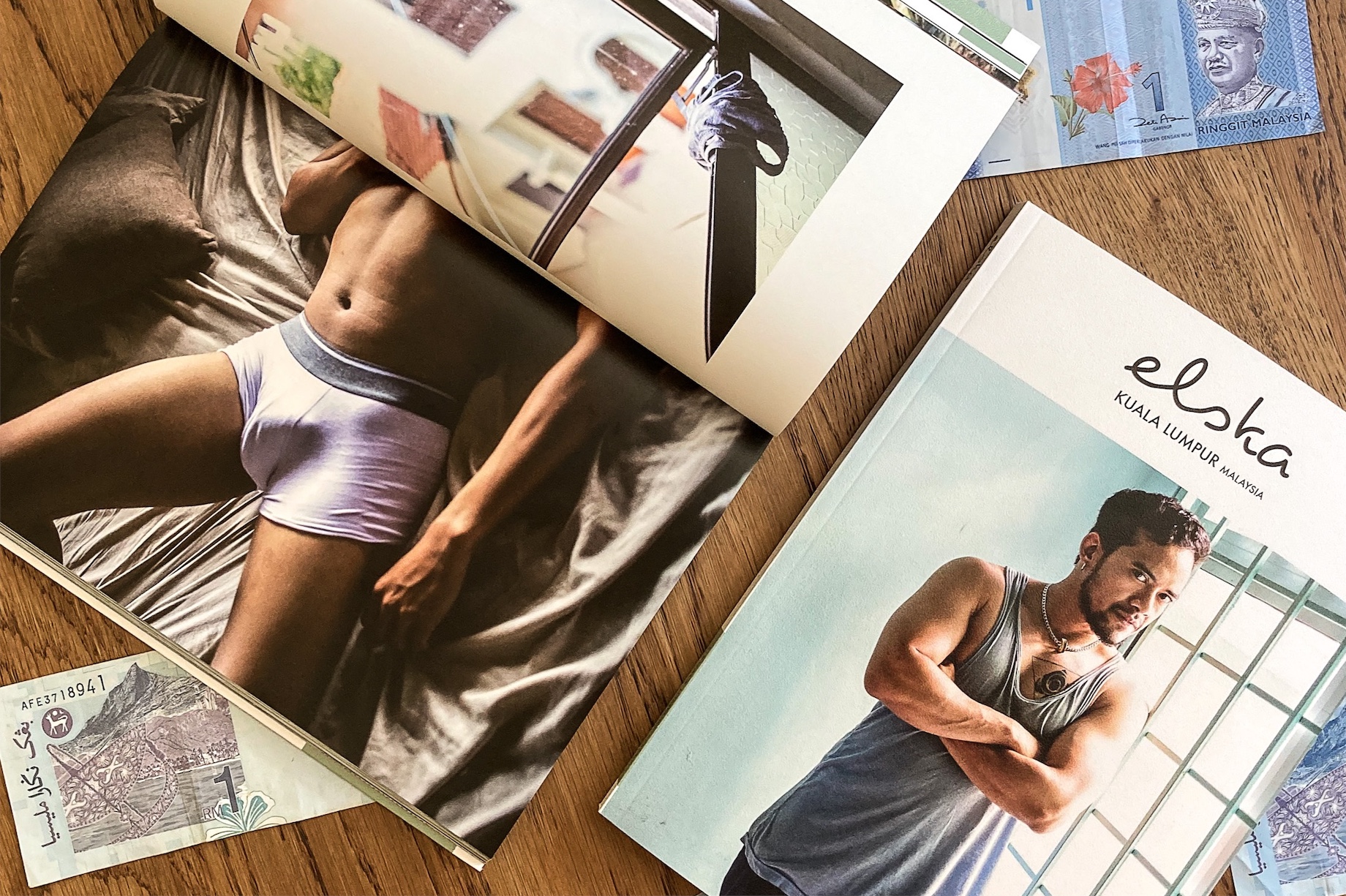 Elska Kuala Lumpur is out now in a limited edition print version and in an e-version. A behind-the-scenes companion zine called Elska Ekstra Kuala Lumpur is also available from the Elska website.