Pride is being celebrated in very different ways in 2020 because of the COVID-19 pandemic. Physical parades in most places around the world are not allowed, with Taiwan a notable exception. However, besides these many virtual events, some locations are still making sure some physical acknowledgment of Pride is taking place.

Below are just a few examples from some of our favorite cities.

Santa Monica is marking Pride month with a rainbow light installation along its Third Street Promenade in the Downtown district. The popular tourist attraction is lined with retail outlets and restaurants, many of which have now reopened and are operating with social distancing measures in places.

The Five Hundred, a landmark office and retail space in Palm Springs, will be marking Pride Month by bathing itself in rainbow lights until the end of the month. The lights will come on at dusk and remain on until dawn. It’s part of the building’s ongoing ‘Lights for a Cause’ initiative to highlight notable anniversaries and nonprofits. The building is located at 500 S Palm Canyon Drive.

Boston in Massachusetts was due to celebrate its 50th Pride anniversary this summer. However, that’s now had to be canceled. Instead, pride organizers have invited the whole city to ‘Iluminate with Pride.’ That can be citizens simply displaying rainbow flags or lights, or major landmarks utilizing rainbow lights. Buildings that have already taken part in the initiative include the Prudential Tower, the Museum of Science, the Longfellow Bridge, and Summer Bridge in Fort Point Channel, among others.

San Francisco was looking forward to holding its 50th anniversary Pride festival. It was expected to be one of the biggest Pride gatherings of the summer. Unfortunately, the pandemic has quashed that, but the city will still be marking pride season. Firstly, expect an acre of pink LED lights to illuminate artist Patrick Carney’s iconic Pink Triangle art piece, atop Twin Peaks, and visible from many parts of the city.

The annual installation, now in its 25th year, is normally made from 175 pieces of pink tarp assembled by 300 volunteers. Assembling the piece during the time of social distancing was proving a challenge. Instead, an illuminated alternative is going to be utilized for 2020. Carney has been helped out by the nonprofit, Illuminate. It will be turned on for the first time on Saturday, June 27. The project is being put together with fundraising through GoFundMe.

Besides this, San Francisco’s City Hall will be lit in rainbow colors between June 22-28 (with the trans flag colors on June 26). San Francisco Airport will also be illuminated in rainbow lights on the same dates (and the trans flag on the 26th). Rainbow flags are also now flying along Market Street until the end of June.

The San Francisco Arts Commission is also sponsoring a series of beautifully drawn education billboards on bus stops across the city. Win Mixter is the second artist in the 2020 series, presenting his project Pride is a Protest, a series of 36 unique black-and-white posters, covering 18 different subjects that aim to re-center the narrative of annual pride celebrations away to its original principles of resistance and rebellion. 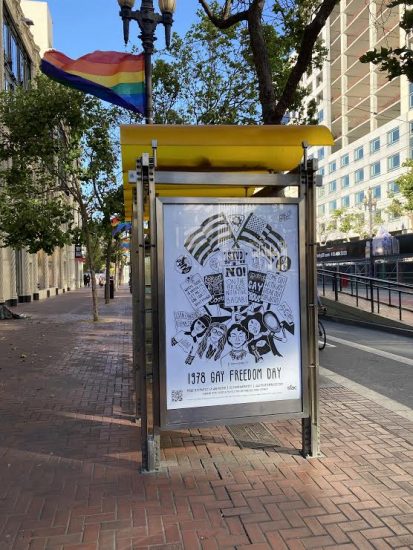 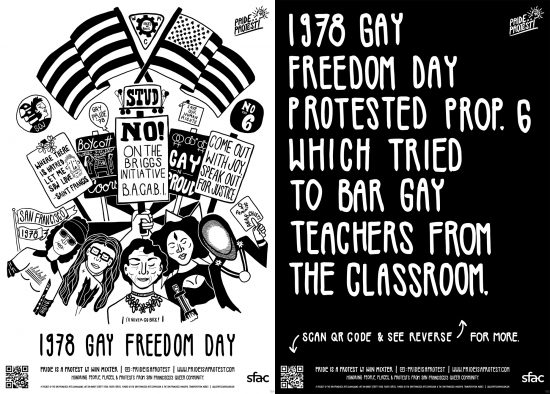 “The rainbow crosswalks, to us in the City of Key West, mean that everybody is welcome, everybody is equal, everybody is recognized and, once again, that we do really abide by the ‘One Human Family’ spirit,” said Key West Mayor Teri Johnston. “Everybody is a part of Key West.”

Providence is one of the few locations in the United States to host an evening, nighttime Pride parade. That’s had to be canceled this year, but the city is still proud to light the Rhode Island State House in rainbow colors for Pride season.

If you’re in the area, you may also be interested in knowing that there will be ‘Resistance and Resilience Rally for QTPOC‘ taking place this Saturday (June 20th), at 4.30 pm. The grassroots-organized march will start with a rally at Cathedral Square and march to the State House for a second rally, following as closely as possible the route of the city’s first Pride march in 1976. Those attending are asked to wear a mask and adhere to social distancing measures.

Several landmark buildings in Pittsburgh are illuminated in rainbow colors for Pride Month, including the Fifth Avenue Place (the Highmark Building), the Union Trust Building, the Pittsburgh City-County Building and the Allegheny County Courthouse.

Montréal, in the heart of French-speaking Canada, has teamed up with tech company Moment Factory to help illuminate some of its most iconic buildings. This includes the Jacques Cartier Bridge, which spans the Saint Lawrence River. The bridge will be bathed in rainbow light to coincide with the city’s Pride festivities. The majority of this year’s festivities will take place online from August 10-16, 2020.

Pride Inside is a not-for-profit grassroots campaign in Great Britain. It’s the brainchild of writer, performer, and drag star Ginger Johnson. Because all the summer Pride events in the county have been canceled, the campaign wants to raise visibility in public spaces. To this end, it’s teamed up with digital billboard company Clear Channel. The latter has donated spots on 1,000 digital billboards across cities in the UK to show images of LGBTQ people at home. The campaign, which also points people in the direction of local support services, runs until the end of June.

In a statement, Ginger Johnson said, “Usually we take to the streets for Pride. We take to stages, demos, and dancefloors. We climb on board floats or walk shoulder to shoulder with our families and friends but this summer that just isn’t possible. So it’s crucial that LGBTQ+ people from all walks of life are visible and proud in our public spaces even if we can’t be there together in person.”

If you’re in London, TfL (Transport for London) will also be marking pride with its special inclusive roundels. Look for rainbow, trans and bi flags on roundels at tube stations, including Hammersmith and Vauxhall, among others. The signs will appear from next week.