James Baldwin is one of the 20th century’s most revered gay writers. His words have been drawn upon time and time again, especially in the wake of protests and uprisings across US cities (and the world) against police brutality and racism.

Baldwin was born in 1924 in Harlem, New York City. He died of stomach cancer in 1987, aged 63, in France. He relocated to the country at the age of 24 but returned to the US often for lecture tours and other work. He was also active in US civil rights demonstrations, such as the 1965 march from Selma, Alabama, to the state capitol in Montgomery.

Baldwin’s work often explored race, sexuality, and spirituality, with a particular emphasis on racial discrimination in the US.

He wrote essays, novels, plays, and poetry. Notable work includes his 1953 debut novel, the semi-autobiographical, Go Tell It On The Mountain, his essay collection, Notes of a Native Son (1955), and 1963’s collection of two essays entitled, The Fire Next Time. Many regard The Fire as an essential book for insight into race relations in the US.

His 1974 novel, If Beale Street Could Talk, was adapted into a movie in 2018 by Barry Jenkins. Giovanni’s Room, published in 1956, was  a groundbreaking exploration of same-sex attraction. It was a fictional work focussing on an American living in Paris who has a brief affair with an Italian he meets at a gay bar.

No. I am not a pessimist. Pessimists, I’ve noticed, are silent. I am not bitter either, for example. People who are bitter are silent, too. No, I am not pessimistic. I don’t know how this will be achieved but it must be achieved. So we will have to do it. – James Baldwin, in an interview, 1960 ▪️ ▪️ ▪️ ▪️ ▪️ 🖤 ▪️ ▪️ ▪️ ▪️ ▪️ #JamesBaldwin #Blackgenius #Blackicon #Blackgayicon #queericon #queer #Blackandqueer #QPoC #Blackhistory #history #Blackculture #genius #Blackwriters #Blackhistorymonth #Blackexcellence #Blackisbeautiful #Blackbrilliance #gaywriters #queerwriters #gay #bisexual #bi #lgbtq #lgbtqia #quotes #quote #optimism #activism #Blackliberation #1960

A post shared by James Baldwin Archive (@jamesbaldwinarchive) on Feb 3, 2020 at 3:45pm PST

Another good starting point for anyone new to Baldwin’s work would be the Academy Award-nominated 2016 documentary, I Am Not Your Negro, which is available on streaming services.

The words Baldwin wrote in the 50s, 60s, and 70s continue to resonate. Tragically, much of what he wrote about racism is as relevant today as when he wrote it, close to half a century ago.

For instance, in an interview with Esquire in 1968, following the death of Martin Luther King Jnr., he was asked about rioters looting stores while protesting.

“Who is looting whom?” Baldwin shot back. “The mass media – television and all the major news agencies – endlessly use that word ‘looter.’ On television you always see black hands reaching in, you know. And so the American public concludes that these savages are trying to steal everything from us. And no one has seriously tried to get where the trouble is. After all, you’re accusing a captive population who has been robbed of everything of looting. I think it’s obscene.”

Other Baldwin observations that continue to reverberate include, “I can’t believe what you say, because I see what you do,” and “Not everything that is faced can be changed, but nothing can be changed until it is faced.” His work is full of such insight.

In the years following his death, Baldwin’s life and work continue to be celebrated. In 2015, the Greenwich Village Society for Historic Preservation erected a plaque on an apartment where Baldwin lived in the late 1950s. You’ll find it at 81 Horatio Street, Greenwich Village – near the Whitney Museum of American Art. 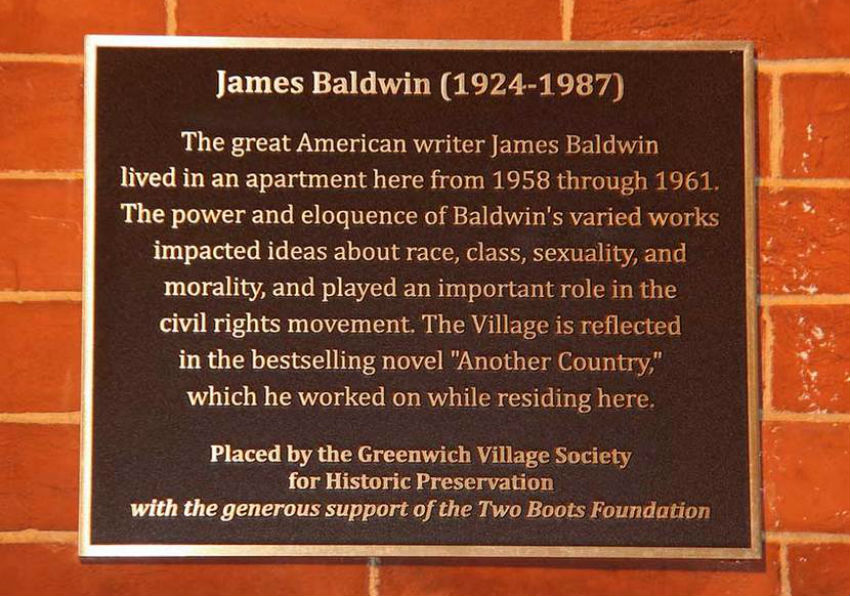 Elsewhere, Baldwin Court in Bayview, San Francisco, is named after him, and Baldwin features on Chicago’s LGBTQ Legacy Walk and San Francisco’s Rainbow Honor Walk. The US Postal Service commemorated Baldwin with a stamp in 2004.

Baldwin is buried, alongside his mother, at Ferncliff Cemetery in Hartsdale, near New York City. 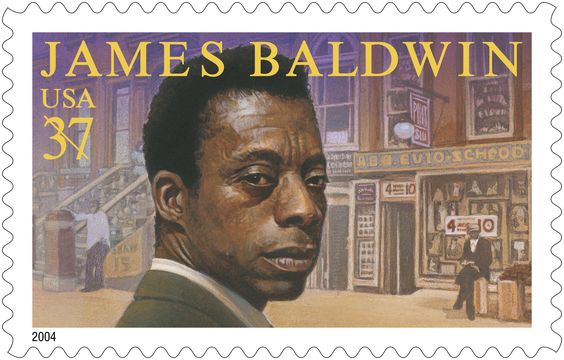