Depending on where you live in the United States, you’ve been quarantining at home for 8-to-no weeks.

Here in New York City, like much of the “coastal elite,” we are at the lengthier end of that span, having started in mid-March. Governor Andrew Cuomo, who has centered his press conferences and decisions around scientific fact, therefore easily trumping the president as America’s de facto leader, recently announced that New Yorkers will be staying at home until at least May 15th.

If I were seeing that update through the rose-colored glasses thrown at me by a low-rent drag queen working the vodka sponsor’s float at last year’s World Pride, I would be thrilled knowing we are halfway through the pandemic. But the one thing we have all lost to COVID-19 is an optimistic sense around its conclusion.

So, with weeks/months/years to go, like many of you, I began to wonder how I could fill my free time. Which, in turn, inspired this column, [email protected], which will run on GayCities and its sister site, Queerty, during Pride season. I hope this will prove to be an amusing distraction from our current situation. I aspire to provide some solace, inspiration, amusement and/or humor to those of you interested enough to read one or more of these pieces in the series.

About me: I’m a gay, white, cisgender male living in the Financial District of Manhattan in a 1400 square foot, 2-bedroom apartment. I’ve been in FiDi for nearly 15 years – too late to have been directly impacted by 9/11, but long enough to have waded through the tears of the Great Recession and the floodwaters of Hurricane Sandy.

My 35-year-old boyfriend, Travis, only just moved in with me at the end of January – my first time living with a partner in nearly 20 years. He is newish to the city, having only moved here late in 2018 after a lifetime in Phoenix, AZ. We looked forward to living together, but with the logical assumption that we would not be quarantined together. This is our story of that twist of fate.

We are both lucky that our jobs are thus far secure. And even though nearly 20,000 lives have been lost in the city so far, that number does not include anyone near and dear to us. At least not yet.

As with most gays/New Yorkers/gay New Yorkers, staying home is not our natural state. Even in long-term relationships or while developing families, we protect our time and finances to ensure active social and cultural lives, both at home and on vacation. 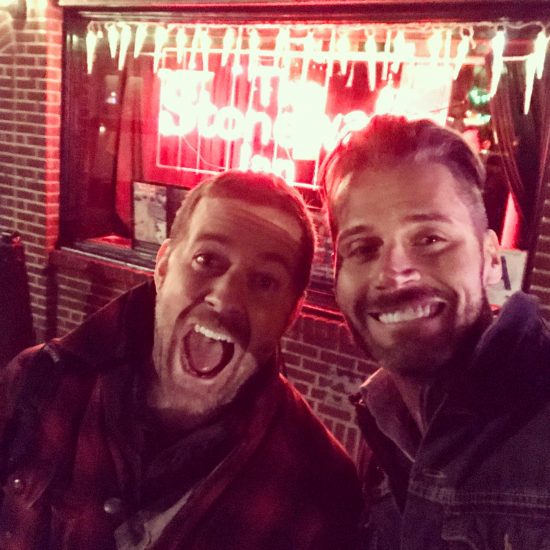 We are gay at work so we can afford our tiny apartments, our exotic trips and summer rentals.

We are gay at the gym so we can fit into our fashionable accouterments in order to turn heads on the street.

We are gay in the park, at the museum, in packed train cars, bars and clubs.

All of which only helped contribute to New York City being the epicenter of the coronavirus.

So now, until this crisis passes, all we can be is [email protected].

This is Daryl Sela’s first post in his series, [email protected], about sheltering at home in downtown New York City.