Rich Campbell, the CEO of Atlantis Events, has a message to his angry customers: “Please stop the attacks.” 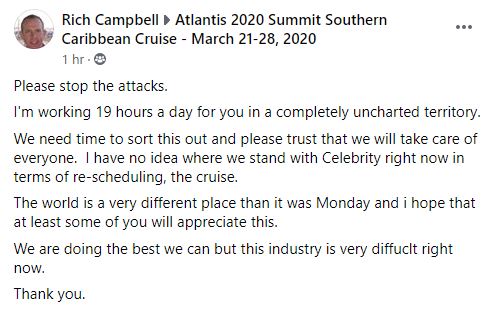 The plea is a response to the growing chorus of complaints from customers who paid for rooms on the Atlantis Southern Caribbean Cruise, which was scheduled to sail from San Juan, Puerto Rico on March 21-28. The cruise was canceled due to the threat of COVID-19, the coronavirus that has spread around the world.

Celebrity Cruises, which operates the ship that was chartered by Atlantis, announced March 13 that they were temporarily ceasing all sailings, thereby canceling the Atlantis cruise.

There have been several cruise ships with highly publicized problems with infected passengers and crew members, but even after other cruise lines announced that they would suspend their operations temporarily, Celebrity Cruises and Atlantis Events issued statements that they insisted on moving forward with their cruise. That left Atlantis customers in an expensive conundrum. Celebrity has a “Cruise with Confidence” program that allows for passengers to cancel 48 hours in advance, and receive a full credit, but that did not apply to the Atlantis cruise because it was a charter. Then Atlantis said it would not allow customers to get refunds for the March cruise, unless they were able to demonstrate specific medical need to do so.

This did not go over well with passengers who feared being trapped on a quarantined cruise ship, like the Diamond Princess where 700 people contracted the virus. Many were infected during the quarantine itself, which was handled terribly by the Princess Cruises staff.

The comments were posted on a Facebook group for prospective Atlantis passengers.

“I personally do not want to go on another Atlantis cruise or Celebrity as the CEO of Celebrity is not someone I would wave into a life boat ahead of me , and unfortunately this whole saga has left more than a sour taste in my mouth,” said one commenter.

“It is absolutely irresponsible of Rich Campbell of Atlantis Cruises and Celebrity Cruises to somehow attach profits of their companies over peoples health. How much is one person’s life worth? How much is it worth if a person loses their job as a result of being quarantined and not being able to return to their job when planned?” said another commenter.

Before the cancellation was announced, another commenter said in a message directed to Campbell, “I will not forget what you have put me and my husband through. Your ignorance, your attitude, your misinformation, your lack of leadership and your lack of empathy have impacted my health. Never again will I allow this to happen.”

Atlantis has had a virtual monopoly over the “gay cruise” industry since the 1980’s. The company’s success is due to intensely devout customers, who books repeat cruises year after year, and Atlantis’ events usually sell out. So if cruise credits are issued by Atlantis or Celebrity, it is safe to say that most customers would use those credits for a future vacation that they would have otherwise paid for anyway.

“To all of you who want to destroy Atlantis over this, go ahead and eat your own,” said another commenter, “but once this crisis ends, and it will, please feel free to move on and allow the rest of us to continue to enjoy our Atlantis vacations.”