More than a hundred people gathered at the Capitol Building in Jefferson City, Mo., to protest a bill that would criminalize “Drag Queen Story Hour” at libraries in the state of Missouri.

The protest was organized “to show senators and legislators that we aren’t the monsters here,” according to the event description, “that all we are doing is providing a space for learning and getting kids excited about reading.”

The bill would also require each library district to create parental review boards that would make final decisions on whether material is age-inappropriate.

This current conflict began in 2019, when a library in St. Joseph, Mo. organized a Drag Queen Story Hour, but city residents created an online petition requesting the event be cancelled, and gathered over 1,000 signatures. Ironically, the petition was created by a city resident whose husband is a registered sex offender, having pled guilty to first degree child molestation in 2006. The library’s staff in St. Joseph ignored that petition and hosted the event, which was so popular, people had to stand in the hall and lean in to watch.

Fortunately the March 7 rally in Jefferson City proceeded without conflict, other than a few appearances by the religious extremists who usually protest LGBTQ events. Although there were some parents who mentioned to GayCities the presence of Sisters of Perpetual Indulgence, a national organization of social activists who dress in drag resembling nuns, because the Sisters paint their faces with whiteface, similar to clowns. Children may not understand Christian fundamentalist protestors, but some are very scared of clowns. 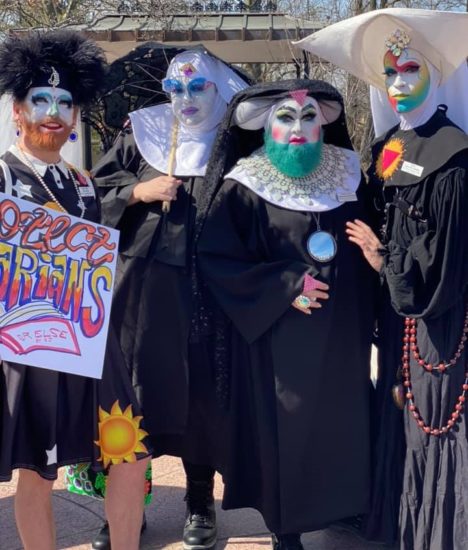 This issue goes much deeper than simply allowing drag queens to read children’s books in libraries. Librarians are often the unsung heroes of free speech, as they fight back against the government’s attempts to censor books and monitor the books that patrons are reading. Missouri’s librarians were praised by the ACLU for refusing to allow the U.S. government to see patrons’ borrowing records, even shredding paper copies of those records before government officers arrived at the library buildings for inspections. In 2016, a librarian in Kansas City, Mo. was arrested (and physically assaulted) for defending a journalist who was asking politically charged questions at a library program, which featured a political advisor to former presidents George W. Bush and Barack Obama.

There were no government officials at the capital on March 7, a Saturday, but the rally generated positive press in the local media.