When Hurricane Irma roared towards the Florida Keys in 2017, the residents of Key West braced for the impact of one of the most powerful storms in Florida’s history. The island was evacuated, homes were shuttered, boats were secured for the incoming swells. But at the last minute, the Category 5 hurricane took a slight turn, and Key West miraculously escaped without much damage.

It seemed like a miracle, at first. But Irma blew directly into the islands that are north of Key West, known as the Upper and Middle Keys; many of these islands, like Big Pine Key, Marathon, and Islamorada, were obliterated.

Related: Is Key West the ultimate spot to spend your winter vacation? You decide.

The storm destroyed over 4,000 homes, along with 1,800 boats, and many shops, hotels, and restaurants. In Islamorada, a destination that is particularly popular with Florida locals, every hotel was flooded and had to close for months, some for years, to rebuild.

Fast-forward to present day, and after a big facelift, the Upper and Middle Keys are alive once again: restaurants have re-opened, hotels are filled with guests, and charter boats are zooming around with snorkeling, scuba diving, and fishing trips. 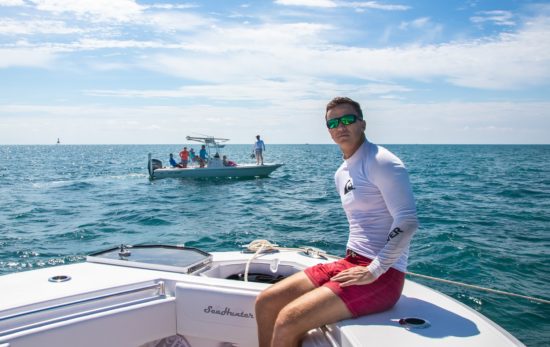 There is a lot to see and do on the islands between Miami and Key West, from soaking in the thrill of the natural scenery, to licking your fingers after eating the fresh Catch Of The Day at Kathie Lee Gifford’s favorite restaurant. Here are our Top 5 favorite reasons to stop in the Upper and Middle Keys:

Go snorkeling off the coast of Key Largo

Key Largo’s biggest attraction is John Pennekamp Coral Reef State Park, which includes a large swath of offshore area in the Atlantic Ocean, and protects one of only two living coral reefs in the continental U.S.  Key Largo is the best spot in all of South Floria, definitely, for scuba diving and snorkeling. The coral is not the bright technicolor reef from Finding Nemo, but the big schools of fish are extraordinary. Rays float along the ocean floor, and occasionally a lucky diver will spot a sea turtle.

For the best experience, take a dive charter. The boat captains know how to find the best spots with lots of fish. Rainbow Reef is not an LGBTQ-oriented company despite the “rainbow” name, but they are a delightful bunch and are very LGBTQ-friendly.

Please Note: Key West has legislation that bans the sale of sunblock that contains chemicals toxic to coral reefs. (All visitors at any beaches anywhere should abide by these rules, as reefs around the world continue to deteriorate due to pollution, and sunblock chemicals are a significant problem.) Well at Walgreens Moisturizing Lotion SPF 50 and Hawaiian Tropic Island Sport Ultra Light Spray SPF 30 are two inexpensive reef-safe sunscreens, so bring some on your boat charter with you, and perhaps leave a bottle on the boat for others to use in the future. Even better, wear a shirt while snorkeling, which cuts down on how much sunblock you will use, and it will also improve the feel of your life jacket, which you must wear while snorkeling. When you see your first puffer fish, you’re going to scream with glee, and choking on ocean water is inevitable. Those pufferfish are slow swimmers and may swim up close, so resist the urge to poke them and scare them into inflating. Leave them alone.

Feed the tarpon (and the pelicans) at Robbie’s

Sometimes tourist attractions really are fun. Robbie’s is a marina in Islamorada, which has a no-nonsense outdoor restaurant, The Hungry Tarpon, where lunch includes fresh-caught fish (and it’s really caught in Florida, as opposed to some Florida Keys restaurants that import fish from overseas). After eating on the outdoor deck, buy a bucket of slimy bait fish for $4, walk down to the end of the pier, and hold a fish in the air over the water. Tarpon jump out of the water and deftly grab the bait fish, although they occasionally try to swallow your hand (photo above, it looks scarier than it really is). The pelicans on the dock are more aggressive than the tarpon, and they will run at you and demand a fish, so be aware of that.

I made a new friend at @TurtleHospital In Marathon #floridakeys pic.twitter.com/ko43OVwVJW

The Turtle Hospital in Marathon cares for injured and rescued sea turtles, and is home to some turtles that are too roughed-up to be returned to the ocean. The facility features an educational visitors center, which has several chances to meet some of the turtles, and it is an interesting, occasionally somber, and entirely heart-warming lesson in ocean conservation. Lots of turtles at the Turtle Hospital are fixed up and returned to the wild, and the cost of admission directly benefits their efforts.

Get a (locally sourced) beer

Wishing everyone a safe and grateful Memorial Day! 🇺🇸 pic.twitter.com/TCL0dnoWhe

The tiny islands of the Florida Keys may seem like an odd place to build a brewery, but making beer is particularly advantageous in the Keys: the islands have a clean and clear source of tap water, the Biscayne Aquifer near the Florida Everglades, which is similar to the superb water quality of the many bottled water sources that come from Florida. (That’s right, folks: brands like Zephyrhills and Deer Park are basically Florida tap water.) Run distilleries in Key West have taken advantage of this water for decades, and are famous for serving high-quality spirits.

Islamorada Brewery & Distillery and Florida Keys Brewing Co. provide beer on tap to bars and restaurants around South Florida, as well as bottles and cans to local markets. They both have their own “tasting rooms,” which aren’t fancy, but they are great places to sample the 40 or 50 varieties of beer that they have on tap. Both breweries are known for their delicious, smooth ales, which are brewed best at warmer temperatures, perfect for Florida. (Lagers, associated with New England, are brewed at colder temperatures.)

Kathie Lee Gifford loves Alabama Jack’s, a dive bar and restaurant in North Key Largo, and she has told many stories on her various talk shows about her (slightly tipsy) escapades here. The restaurant is basically a roadside shack, tucked into some mangroves on a murky canal, where people arrive by Harley-Davidson or by fishing boat for an afternoon of fresh fish and strong drinks. The resident honky tonk band has played here for almost 30 years, and when the Alabama Jacks Clog Dancers aren’t doing their thing, Kathie Lee has been known to knock back a drink or two and then grab the mic and sing. This is all absolutely true. Take a look and listen:

GayCities can be reached at [email protected].