In September 2019, I was working at a coffee shop in Lincoln, Neb., when I cursed at a customer who was an employee of the Nebraska Family Alliance (NFA), my state’s most powerful and successful anti-gay and anti-trans lobby. I’m a trans woman, and I had been fighting this organization for years. As I watched her eat her crepe, I could no longer tolerate her intolerance of me and my community. I wanted to show her what it was to face constant aggression, incivility, and a sense of being unwelcome.

On her way out the door, I screamed. I berated. I attempted to shame. And I lost my job.

A little over a month later, I was hired by Kamala Harris. Her staff knew about my history with the NFA, and they offered me a position with her presidential campaign. After I accepted, I had an opportunity to speak with Kamala at a campaign event. She told me, “You never ask to lead, you just lead.” She believed in me, and I believed in her. I still do.

The tears since she announced her exit from the 2020 presidential election have been constant. This feeling of loss is second to the evening of November 8th, 2016, when the candidate I supported in that election was the victim of smears, lies, propaganda, and hate from both ends of the political spectrum. It cost her—and this country—the presidency, the Supreme Court, and our collective national standing and reputation. Now the candidate I supported in this race has met the same fate, but much sooner in the race. 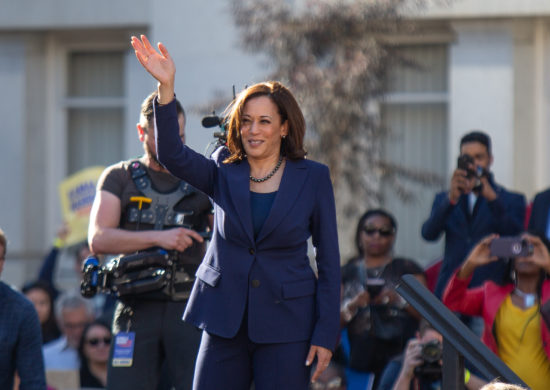 “Kamala’s a cop,” she’s “anti-trans,” she “can’t win,” she’s “not a liberal,” she’s “not a leftist.” Those are just a few of the outright untruths our campaign had to deal with. I could address all of them, but I will address just one that hits closest to home: that she is “anti-trans.”

Kamala used to be the Attorney General of California. While in that position, she denied some trans women inmates the approval to receive gender-affirming surgeries, which are state-of-the-art procedures that would have been on the taxpayer dime.

However, she also did other things. She made California the first State in the country to outlaw “trans panic defense.” She made sure trans women inmates were housed with other women, made sure they had access to hormone replacement therapy, mental therapy, and name and gender marker changes on their state issued IDs.

She did draw the line at gender-affirming surgeries, but to say that her decision about this single topic should be the thing that defines her support, or lack thereof, for people like me is not only ignorant, it’s racist. It’s sexist. It’s wrong. At a time when the only LGBT2QIA+ candidate running refused to shake my hand, Kamala hired me, a person who was seen as nothing more than a vulgar national headline. Kamala was and is, without question, the candidate in this race who has the best record of accomplishment for people like me, and she would have been the best President this country has ever had for trans people. Period. Full stop.

Kamala’s campaign is over now. There will be much written about her, her campaign, and what could have been done differently over the next several days. But, at a time when the Democratic Party relies on black women like no other constituency, at a time when utterly unqualified white men are still running, remember: Parroting untruthful claims about the only black woman with the gumption to run, and stand up to Donald Trump, isn’t doing our party any favors, and does nothing to advance our cause of removing the current occupant of the Oval Office.

Comments on this editorial can be written on the GayCities Facebook page, and will be moderated for following GayCities commenting guidelines.