Mandalay Bay Resort and Casino, that glittering gold tower on the Las Vegas Strip, is a grand palace even by Las Vegas standards: through the front door are over 3,000 rooms, 27 restaurants (possibly more? we tried to count), and a wave pool that is twice the size of the swimming pools used in the Olympics. Big. Everything is big.

But there is quality in the quantity of Mandalay Bay, as guestrooms are elegant, calm, and tasteful, and service is remarkably polite and efficient. Among those 27 restaurants, you’ll find some of the best meals in this city, making this property a destination even for people who aren’t staying in the hotel. And again, there is the pool. But we will discuss that later.

Getting there: Mandalay Bay is blessedly close to the airport, so taking a taxi is easy and inexpensive. Did you read that correctly? Take a taxi. They still exist, and people still use them. To take a ride share from the Las Vegas airport, there is much drama involved in walking all way to (and through) the parking garage, and then finding the “ride share waiting area.” After that walk, and waiting for your car to show up, you would already be at the hotel if you took a cab. The ride is so short, a taxi only costs approximately $5 more. Win that $5 back in the casino.

Checking in: The line at that check-in desk took us 18 minutes. That’s typical of Las Vegas casino hotels. But the check-in process itself was fast, even as the front desk attendant went to great lengths explaining the minimal fridge, begging please not touch anything in the minibar fridge, it is weight-sensored, and even putting in leftover food or a bottle of water will result in a charge. She said it three times. Note to self: don’t open the fridge, got it.

The rooms: Wooden surfaces and natural fibers punctuate the guestrooms, adding depth and a sense of timelessness to the design. Considering this is an enormous, buzzy casino, the vibe in the rooms is quite relaxing. The beds are plump and comfy. No information is available about what the inside of the minibar fridge looks like, because it was not opened, thank you very much.

The food: There really are 27 restaurants in this casino, and that’s not counting the various snack bars and Starbucks and such. Options range from burgers and burrito bowls, to super-expensive haute cuisine. Although there are not many Asian food options, which is surprising, considering the property is named after Mandalay, a city in the southeastern Asian country of Myannmar. But there is an inexpensive food court with a noodle shop, and their food is really tasty.

Speaking of tasty: for an extraordinary meal, put on your trendy jeans and go to Libertine Social, part gastropub and part hipster cocktail lounge. Order absolutely everything. Whet your appetite with the yellowtail sashimi cones, splurge on the housemade Italian sausage board, savor the seasonings and lick the umami off of your lips and eat as much food as humanly possible, then worry about the calories tomorrow. Or never. For a glorious red meat experience, get the Waygu steak, cooked over a wood-fire grill and smothered in chimichurri. It will make you moan. 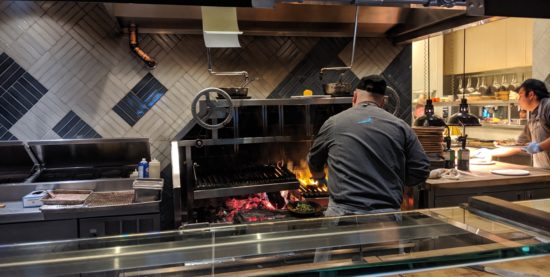 Find this man working at the wood fire grill in Libertine Social, and have him grill a Waygu steak for you. And then marry him.

Related: Check out the nightlife scene in Las Vegas

Let’s discuss the pool. Here’s the situation: Mandalay Bay has four, yes four, pools. Two are “lagoon” pools (the East Lagoon is usually pretty quiet), one is a Lazy River for floating, and then there is that Wave Pool, which is absolutely enormous.

The Wave Pool is open to the public, with a small admission fee, so it can get crowded on weekends. The entire pool facility is generally quieter on weekdays, when kids are in school.

But wait! There’s more: just a 5-10 minute walk through the casino tunnels or a quick (and free!) tram ride leads to The Luxor, an adjoined property next to Mandalay Bay. Their Temptations Sundays is a dayclub pool scene for the gays, as well as a refreshing presence of lesbians and a straight friend or two. Music: hip hop. Swimsuits: mostly Speedos.

If you clicked on the Temptations Sundays link, you certainly saw the photos of sexy models by the pool. There are people in Las Vegas who really do look like that, just walking around. Las Vegas is home to a robust community of dancers, acrobats, and contortionists, as well as other professionals who are required to be extremely attractive, and these people sometimes want to hang out at the pool just like normal mortal humans.

Yes, Jae Fusz, choreographer and Britney Spears backup dancer, likes to hang out at the pool.

Usually the pretty boys congregate in private cabanas, but they will occasionally emerge to allow the masses the pleasure of watching them apply sunscreen to each others’ lithe bodies, and that is a slow, methodical process that takes at least two or three songs to complete. And of course much posing is involved as well. It is glorious to behold.

Eye-candy aside, the vibe at Temptations Sundays is very relaxed, very body-positive, and the crowd is all shapes and sizes. (And almost everyone is visible from the nipples-up anyway, because they’re in the water, simply because summers in Las Vegas are hot.)

Temptations Sundays runs all summer, and ends in the middle of October. And it is on Sunday afternoons, obviously.

One more thing: There are two other hotels on the Mandalay Bay property: The Four Seasons occupies four floors near the top of the main building, but has a separate entrance; The Delano (pronounced DEL-a-no) has its lobby connected to the main casino. The Delano has a cute coffee bar in its lobby. There is so much to say about this hotel! Go see it for yourself, it’s great.

GayCities can be reached at [email protected]