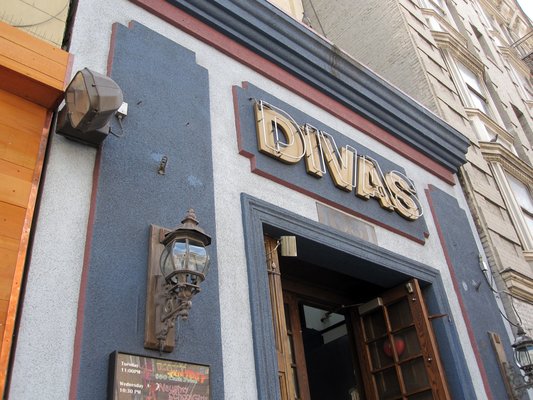 Before the Castro, where the gay boys of San Francisco legend gathered to play in the 1970s, there was Polk Gulch. The neighborhood around Polk St., near Nob Hill, was the predecessor to America’s most famous gayborhood, and a few nightlife spots still keep chugging along, business as usual.

But now Polk Gulch will have one less bar: Divas, a longtime club (formerly know as Motherlode) that catered to the trans community, announced they would bow out of the scene on March 30. The building is in the process of being sold, with a price tag in the millions of dollars because this is San Francisco, although there have been some legal snags so the owner is still serving cocktails to distraught regulars who are brokenhearted to see their beloved bar close. The closing party Saturday night.

According to SF Gate, both the bar and the building were owned by Steve Berkey, who decided to close the club for reasons unknown, although rumor has it that hookup apps made the bar’s business too slow. Berkey’s building has been for sale since 2014, but he may have not been sure he wanted to close at the time and priced it too high to be competitive. Now he was ready to let it go.

Despite San Francisco’s reputation for leading the charge to gender equality and the multitude of bars in town that feature drag performers, Divas was the only nightlife operation dedicated specifically to the transgender community. Divas also served as a social hub for the community, and the bar’s management and staff organized outreach campaigns, including serving homeless people nearby.

David Steinberg, a sex columnist and photographer who published a book featuring Divas performers, wrote a heartfelt farewell to Divas on his Facebook page, praising “the courage and integrity of the trans women who frequent the club, women who will always be my heroes and role models for having the courage to be themselves regardless of the misunderstanding, disrespect, and outright hatred that being themselves engenders in other people, and the emotional and very real physical danger that they must consequently deal with every day of their lives.”

Related: 10 legendary San Francisco gay bars (current and past) that liberated your world