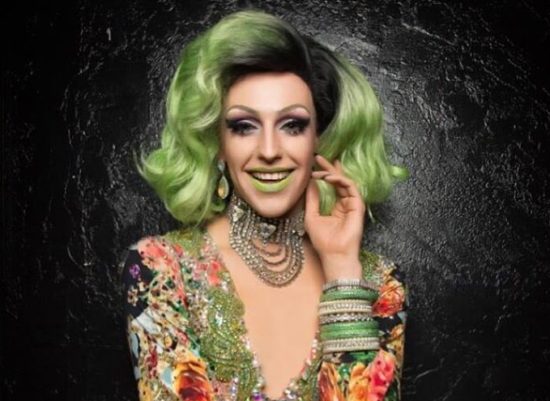 Laganja Estranja is well known as a cast member of RuPaul’s Drag Race Season 6, where she butted heads with alumni like Bianca del Rio and Courtney Act, and treated the workroom to her chirping colloquialisms like okur and yes Gawd!, phrases that have now crept their way into casual drag conversation.

Beyond the eccentric drag persona, however, Estranja—real name Joe Jackson—has some legitimate stage credibility. A graduate of the California Institute of the Arts, she had already accrued years of experience in musical theater when she landed a spot in another reality competition show: as a contestant on season 15 of So You Think You Can Dance? Competing sometimes dressed in drag, other times as a man, Estranja was eliminated just before reaching the Top 20 semifinals. Since then she has stepped up her training, completed a program at the YoungArts dance academy in Miami, and in February 2019 she auditioned again.

Estranga is currently touring the US as a cast member in Mean Gays, produced by living drag legend Peaches Christ, and shares the stage with Drag Race alumni Kim Chi and Willam Belli.

GayCities caught up with Estranja as she waited for rehearsals to start at Seattle’s Egyptian Theater.

Let’s talk about Mean Gays
L.E.: Mean Gays is a drag parody of the movie Mean Girls, so it has the favorite lines from the movie, but twisted a little bit. For example, instead of saying, “That’s so fetch,” the line is, “That’s so felch.”

Who do you play?
I play Karen (Amanda Seyfried in Mean Girls), but we changed the character’s name to Laganja, and made her a stoner. The reason she is such an airhead is that she’s stoned.

Drag theatre has a reputation for the actors breaking character on stage and goofing around just to get a laugh. How much of that happens in Mean Gays?
The fourth wall is definitely broken throughout the show, especially with Peaches (Christ), who is known for being over the top and dramatic, so there is an element of being on your toes. And the audience loves it. The audience enjoys the fact that we are real people up there. But it’s not just a shitshow. There are dancers, rehearsals have been made, we’re taking it seriously.

There are critics who think that the recent popularity of drag has made it too mainstream. Do you think RuPaul’s Drag Race is helping drag or is the success of the show watering it down?
I am all for mainstream. I am grateful that our art form is getting exposure by being on a major network. When Drag Race was on Logo, mainstream people didn’t have access. They didn’t know how to go to a drag show. But now people are having these conversations, and being on VH1 has given people accessibility.

When Manila Luzon was on All Stars 4 and she wanted to wear a dress in the shape of a menstrual pad, the producers said it was in “bad taste” and told her she couldn’t wear it.
I respected Manila for wanting to wear the dress, and I respected how she handled it. She posted a photo of it and said she was disappointed, and then she moved on. At the end of the day, that’s TV. There are rules for being on the show, and we have to follow those rules. The show’s not about one person’s political statement, it’s about the greater good.

Yes, subversive. Good word.
We have come so far. Look at the advancement we’ve made. If we lose a little concentration so we can progress, then so be it. And it’s just a TV show, it has nothing to do with the art form. There are still plenty of places where that style of in-your-face drag still exists. Go to Brooklyn.

How was your audition for So You Think You Can Dance this season?
I can’t talk about it, as I’m sure you understand. But I’m really excited. We’ll see what happens.

Did you enjoy So You Think You Can Dance last year?
It was the best thing that I have ever done.