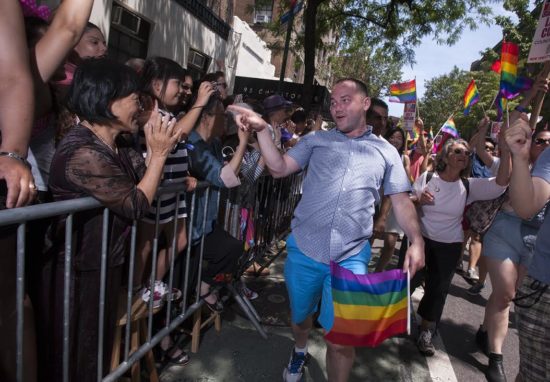 As an openly HIV-positive elected official, Corey Johnson is used to big challenges. Championing the Big Apple, Johnson has tirelessly worked for equality and social justice as speaker of the New York City Council.

GayCities chatted with Johnson ahead of New York City Heritage of Pride about his plans for the big month and his hopes for the future of LGBT activism in a difficult time.

How will you be celebrating Pride this season?

I always feel very conflicted because I love Pride and June is such a great month to be in New York City — but I also feel like it’s so exhausting. I feel almost too proud by the end of June. I march in the Queens Pride Parade, the Brooklyn Pride Parade, the main New York City Pride Parade down Fifth Avenue in Manhattan and I go to countless events across the city. The city council also has its own big Pride event. It also happens at the same time that we are adopting the city’s budget, which is one of the biggest things that the city council does annually. All this Pride action will be going on while I’m negotiating an $89 billion dollar budget for the city of New York with the mayor.

Related: More than a million people will march in NYC Pride. Amtrak® gets you there in comfort.

What are some moments from this past year that have made you proudest?

I’m really proud of the resistance to the Trump administration. Every modern civil rights movement in American history were started and led by people, not by politicians. One of the things that I was fearful of was that after the Windsor decision came down and we got marriage equality was that everyone was going to feel like we could pick up, go home, live in our white picket fenced yards and feel great about things. Clearly, the 2016 election showed that the fight for our civil rights isn’t over. I’m really proud of the continued activism, advocacy, and organized resistance in this country.

For me, the most moving public action or event that I participated in was the March To Save Our Lives. I really love Gays Against Guns — I’m really proud that two years ago, after the Pulse massacre, a friend came to me and said that they were trying to get a spot in the Pride parade so I gave them my spot. That was their first foray into the public, and then they won the award for their contingent. To see them at the March for Our Lives in Washington — I was really proud of that queer component to the conversation around sensible gun laws.

When did you first experience pride yourself?

I remember it very clearly. I went to my first Pride parade in June of 1999. I had just turned 17 years old. I had just come out to my family two months earlier in April. I went to Boston and I met up with the one gay person that I knew, an older guy who worked at GLSEN. We met on the Boston Common and did the entire march together. I felt so moved that there were other young LGBTQ people. Just being themselves and living their lives. It was such a seminal moment for me in feeling a moment of comfort and security in my own identity as a newly out gay teenager. I always love going to any Pride parade across the country and seeing young gay people who are experiencing their very first Pride. And they’re so blown away by it. So many of us can be so jaded–we’ve gone to too many Pride parades. But seeing the young people — it reminds me of my experiences as a 17-year-old.

What does Pride mean for you? 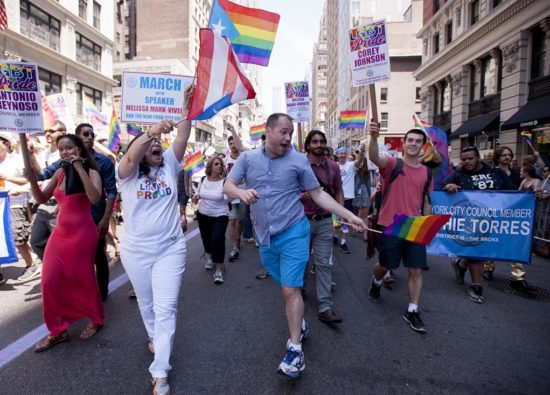 Pride just means being your loud, uncensored self. I am a huge, huge, huge Lady Gaga fan. For me, Pride is really like: Baby, I was born this way! Whatever you are, whoever you are, whoever you love, however you want to express yourself, whatever you want to be: Pride is about that. Pride is the day of the year where anyone can show up and march in nine-inch stiletto heels down Fifth Avenue or be a parent of an LGBT teenager and march with PFLAG–or be a military veteran who has served proudly for our country. It’s about being who you are and being celebrated for who you are.

Who are some icons you look up to?

Hanging in my office in City Hall right now is an old photo I have from The Leslie Lohman Museum: One is a picture of Harvey Milk, another is a photo from one of the earliest Act Up organizing events with Larry Kramer in 1992, and one is the original Silence = Death posters. Barry Rustin, who was one of the organizers of the March on Washington, was openly gay. He is someone who I have deep admiration for.

And then there are more modern day people: Ellen Degeneres. I think I was 14 years old and I remember when she came out. I remember what a big deal that was.

There are also people who aren’t are who I think are icons to the gay community. Like Lady Gaga, Madonna, Donna Summer, Katy Perry, Rihanna. I love these soulful, amazing, fierce women who have similarly just been themselves in outrageous and amazing ways.

What do you hope to see happening in future Pride celebrations?

Pride is an opportunity for us to reflect back on the year — the successes and the setbacks. Especially in this dark, horrific time we’re living in with the Trump administration and with lots of states introducing anti-LGBTQ legislation, we know the fight isn’t over. There’s a lot more to do.

There’s still the parental rejection of gay teenagers. There’s lots of violence directed against LGBTQ people, especially trans women of color. There’s still discrimination in housing, public accommodations, and employment. Even though we celebrate who we are and we accept everyone in our community — it’s an opportunity to be reflective and reignite the flame of activism for the future battles that still haven’t been fought that need to be won.

Eat at Elmo and go to the Horse Meat Disco party!