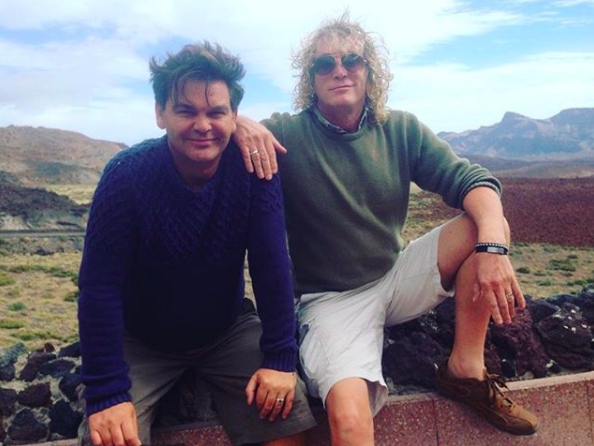 English funnymen Paul Darnell and his hubby Andrew Kennedy are the two behind The Lola Boys, a traveling cabaret, and variety show. The humorous duo could barely contain themselves during our interview, each taking turns to arrive at a punchline.

Here’s the GayCities chat with these cheeky Lola Boys.

How do you relax?

Andrew: We like to relax whilst drinking. Obviously. We love to try locally brewed beers. And, of course, there is nothing more healing than the ocean.

Paul: I like meeting the locals and attempting our humor with them. It’s great to get a laugh when being sarcastic. It shows we have much more in common than we know.

Paul: Boring. Mine has to be somewhere in the east. I love the people, the food, and the culture. Anywhere with a volcano is always a blast, too.

Andrew: Madame Jojo’s in SoHo London was a fantastic haunt. Sadly, it’s no longer there. But it was so colorful in every way.

Paul: And the piano bar right next door that wasn’t exactly a gay club, but if you weren’t gay in spirit, you didn’t get in. Sadly that Soho doesn’t exist anymore.

Paul: Our favorite hotels are always those where you are made to feel at home. It can be The Dorchester in London or a hostel with a shared bathroom. It’s your host that makes the stay special.

Andrew: And a decent mattress.

Andrew: Street food in Bangkok. Even though they are trying to clean the city up now, the street food is one of the best options.

Paul: Singapore. We had great tandoori last year in Malpe, a small beach resort in Karnataka, India. The best chicken tikka in the world.

Andrew: And we adore ‘La Floria’ in Manilva on the Costa Del Sol in Spain. It has the best prawn pil-pil. Not to mention the Dutch owner Peter who has an enormous charm … so we’ve heard! Oh, and ‘The Blue Elephant’ in London for the best Thai food outside of Thailand.

Where are you traveling?

Malaysia and then Bangkok, before we move on to the Costa Del Sol in Spain.

Brighton on the south coast of the UK. It’s a huge event, but small enough to feel uncommercial. It hasn’t been entirely taken over by the mainstream … yet.

Andrew: San Francisco. Blame Armistead Maupin for that. And Mrs. Madrigal, of course.

Paul: Before he kicks it, I’d love to take Andrew to Buenos Aires where I once had a marvelous experience with two underwear models in a dingy club. One can only hope they still live in the vicinity. Also, Rome because I’ve never been. And surely there is nothing like an Italian Stallion. And Prague, for terrible reasons. And Moscow for the danger. I could go on and on… but I’ll leave it there or you’ll think we’re sluts!