Joshua J. Cook just may have the best job in the world. The San Francisco nightlife impresario promotes nearly seven parties a week at bars and clubs in San Francisco’s Castro ‘hood.

GayCities chatted with Joshua J., as he’s known in the party scene, about why San Francisco is the “gayest” city in the world, his first job and how he became a force in San Francisco’s glittering nightlife.

What drew you to San Francisco?

I was going to school in San Diego, which is a pretty conservative military town, and I realized I wanted to be near a queer community. I’d grown up in nearby Napa, and I’d heard San Francisco was the gayest place in the world and seen the pride parade on TV, so I knew it was for me. I moved here right after the dot-com bust and two months before 9/11/2001. It was a wild time to arrive.

Did it prove to be the “gayest” city? There are a lot of them.

There’s something about the elevated political awareness of the Harvey Milk and Cleve Jones era that just makes San Francisco special. That history is a constant reminder to the community to be mindful of differences and of acceptance. We continually push the boundaries of inclusiveness. It’s a place for everyone, not just cisgender boys. We are trans. We are people of color. We are queer and femme. There’s a place here for everyone.

What did you learn?

When I moved here, all I knew was that I liked boys and wanted to meet boys like me. I’m not embarrassed to say this: I was so naive, I didn’t understand the T in LGBT, but I knew I had to. So I took a class at what, at the time was, the brand-new San Francisco LGBT Center, on Market Street, called “Anthropology of the Homosexual.” It was a huge eye-opener. The gay community was a lot bigger than my little gay boy self, and I was humbled. There is so much human diversity in this community under the queer umbrella, and I am the least of it.

How did you get into the nightlife scene?

In San Diego, in the late ’90s, I was a raver, going to parties, doing the rave thing. That’s when my interest in nightlife started. I was also a theater major, and I dreamed not just of the nightlife in San Francisco but also Union Square theater. By 2001 I supported myself working at what is now the restaurant Fable in the Castro. It was the hot gay brunch spot to see and be seen. 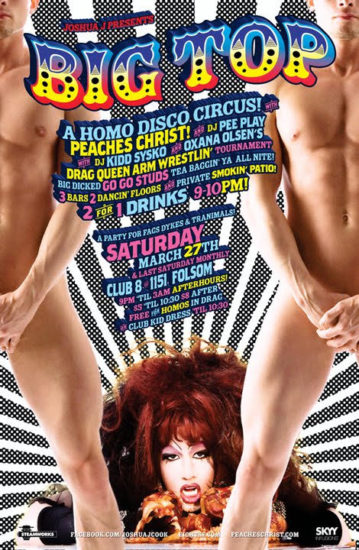 Is that when you met the drag queen Juanita More?

One day, my coworker Isaac said, knowing my interest in theater and nightlife, “you have to meet my friend Juanita, the drag queen”. I was, like, no, “drag is performance, not theater”. But then I went home and looked her up on Friendster, where I was awestruck. I remember thinking to my 22-year-old self, this is not a drag queen, this is a real woman. But, whatever, I was transfixed. My roommates accused me of being obsessed, and they were right.

And the actual meeting?

Once I got in touch with her, Juanita invited me to her apartment to do a shoot for portraits she was calling her “Booty Call” series. I was so nervous showing up at her door, shaking, and this little Latino man answered the door and says, Hey, come on in, man.

But we really clicked over our love of theater, and she showed me her scrapbook of performances with Heklina, at what used to be the party “Trannyshack.” Within minutes, I’m butt naked with a bowl of bananas between my legs, and she’s taking photos. So then I went to see her at “Trannyshack,” and I got there way to early, and started drinking way too fast. Finally, there’s Juanita surrounded by her gaggle of boys. The whole night blew my mind. It changed the direction of my entire life. Oh, my god, I thought, theater may be dead, but theater is alive in nightlife.

The drag scene was just amazing. You could see Heklina, Sister Roma, Donna Sachet, Putanesca, Peaches Christ and Glamamore. Soon I was backup dancing and infiltrating this scene. So I was out every night partying while still waiting tables, and at a certain point I knew I need to make money while I was here. I’d look around Fag Friday and do the math: If, in a packed club, everyone was paying $5 to get in, someone was making money. So I started dancing and DJing to make a little money.

You are managing Midnight Sun now. What the key to creating a great club or nightclub experience?

I try to approach it with what I learned in theater. The employees are all an ensemble, part of the cast, right down to the bar backs and security guards. People don’t go to bars to drink. The vodka at my bar tastes the same as it does at the bar down the street. A lot of bars have go-go boys and drag queens. But my bartenders don’t just give an eyebrow nod. They say, Hey, Babe, how are you? And they mean it. We cast gay, straight and bi. What matters is that we attract what we put out. So I don’t look for the best resume. I look for unique personalities who are genuinely interested in community and creating it.

How do you hire go-gos? You are known for your go-gos.

[Laughs.] I want someone who’s gonna bust their ass for hundreds of people every night. I hire all different shapes and sizes and genders, the muscle guys, the twinks, transgender women and men, bears, hairy dudes and smooth guys. If you just wanna go out listen to some great remixes, maybe get drunk and maybe meet a cute boy or girl, you’ll have a great time.

When you are not at your own events, where do you hang out?

I love the Powerhouse for some leather daddies and bearded queens dancing in jockstraps and the alternative types. The outdoor party experience at El Rio in the Mission is hard to beat, whether it’s “Hard French” on Saturday or “Daytime Realness” with Heklina on Sunday. It’s not about who you are, young or old, gay or not, but about the mango margaritas. I love Donna Sachet’s drag brunch at the Starlight Room. What could be better than old-school iconic divas singing drag songs over eggs Benedict as you overlook the San Francisco skyline? Of course, Jaunita’s parties are always legit, with a lot of fashion and fun. I love Heklina’s Oasis Club, and I always look forward to the Peaches Christ Castro Theatre events. Gus Bean has been holding down the Northern California “Gus Presents” circuit-party scene for two decades.

The food scene has really exploded since you moved to San Francisco.

(My boyfriend) Kurtis and I try to check out new restaurants all the time. We’re really into dim sum and dumplings in the Richmond and Sunset districts. Our staple is Nopa SF, on Divisadero Street, open late, and you can get a great five-star meal at any time. It’s got style, and it’s great for us night-lifers. We love Anchor Oyster Bar, where we split the Cioppino (fish stew). Chow has great standard fare. Across town on the bay, I love Slanted Door, at the Ferry Building. The view of the water and the food and the service are amazing. I’m also big on the Farmer’s Market there on the weekends. 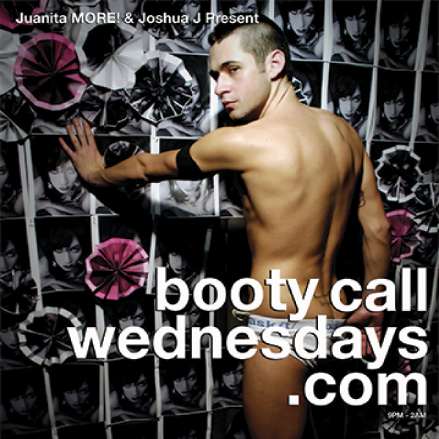 If you can’t host a friend at your place in the Castro, where do you put them up?

Becks Motor Lodge is where I put up a lot of the queens who perform at Beaux. It’s a block from Castro Street and pretty clean and nice. Or I send them to Parker Guest House, which is great, and the other main place to stay in the Castro. I have to give a shout out to the classic Clift Hotel, where I waited tables in the restaurant, my last job before promoting full time. I love the Redwood Room bar’s paneling, the Philippe Starck sconces. I put up Sharon Needles at Hotel Kabuki in Japantown, and with the stream and bonsai trees, it was really relaxing and nice.

Your “Booty Call” party with Juanita was long running and absolutely legendary.

I’d been working with Juanita for a while, and I was doing “Big Top,” at the Transfer, which bounced around venues for a while. At a certain point, I proposed to Juanita doing “Booty Call,” named after her famous photo-series, at what is now Q Bar on Castro Street. The concept was that we’d set up a photo backdrop in the corner, and a lot of  the boys would become photographers. Juanita coordinated that while I booked guest DJs and of course go-gos. I loved that party. I missed maybe two “Booty Calls” in the seven years it ran, every single Wednesday, from 9 p.m. to 2 a.m.

I’m so honored to have had that experience.