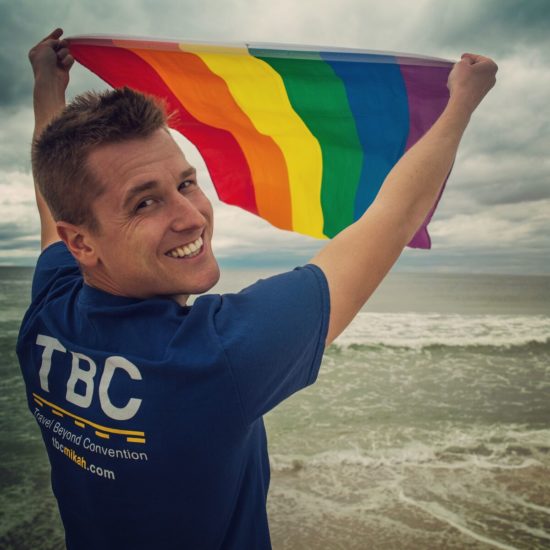 He’s got a wicked smile, enough ambition to set a world record, and is unafraid to fly the rainbow flag in the most rural — and totally unprotected — areas of national parks.

Recently, after speaking with Mikah Meyer about his goal of planting rainbow flags in all 417 U.S. National Parks, our curiosity got the best of us: What does planting a rainbow flag actually look like?

When we contacted Mikah, he’d just received some bad news: the journey was being threatened. “I lost a sponsor [because] they said I was ‘doing too much outreach to the LGBT community,’ partly due to these pictures,” he said.

Ever unstoppable, Mikah has launched a new campaign that will allow him to trudge onward. He’s even designed t-shirts that represent his love for nature.

The travel guru took a little time out of his 36-month journey to share with GayCities his favorite episodes planting the rainbow flag across America. 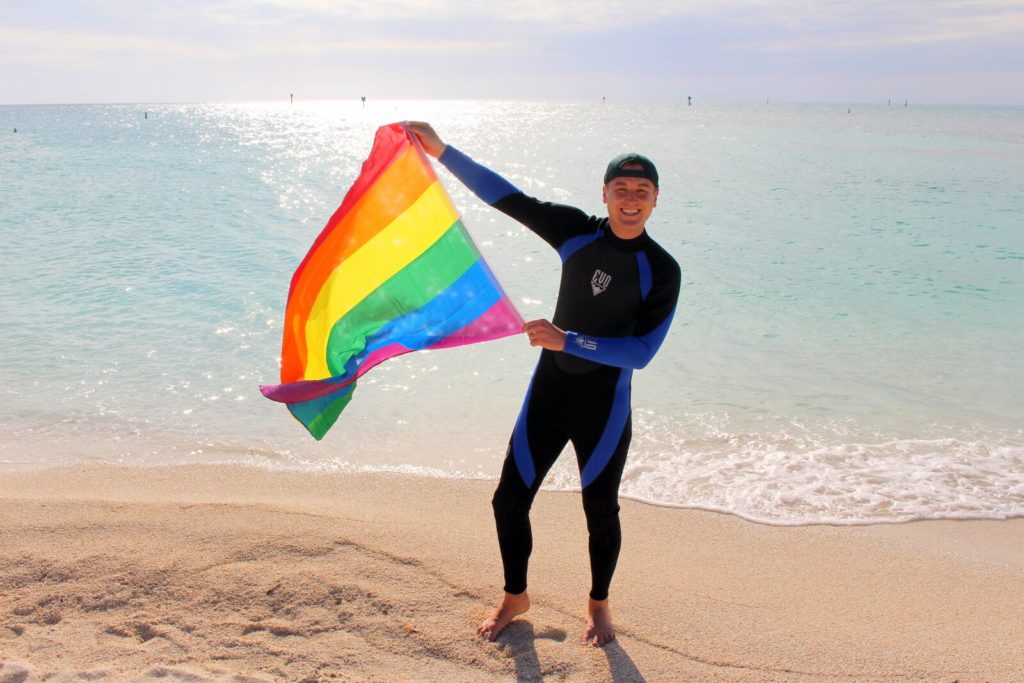 Mikah’s rainbow flag series was inspired by an Instagram message he received from a 15-year-old student of a private Baptist school in Texas. The teen wasn’t out to anyone, but saw Mikah’s journey and “knew not only could he be ordinary, but also extraordinary.” 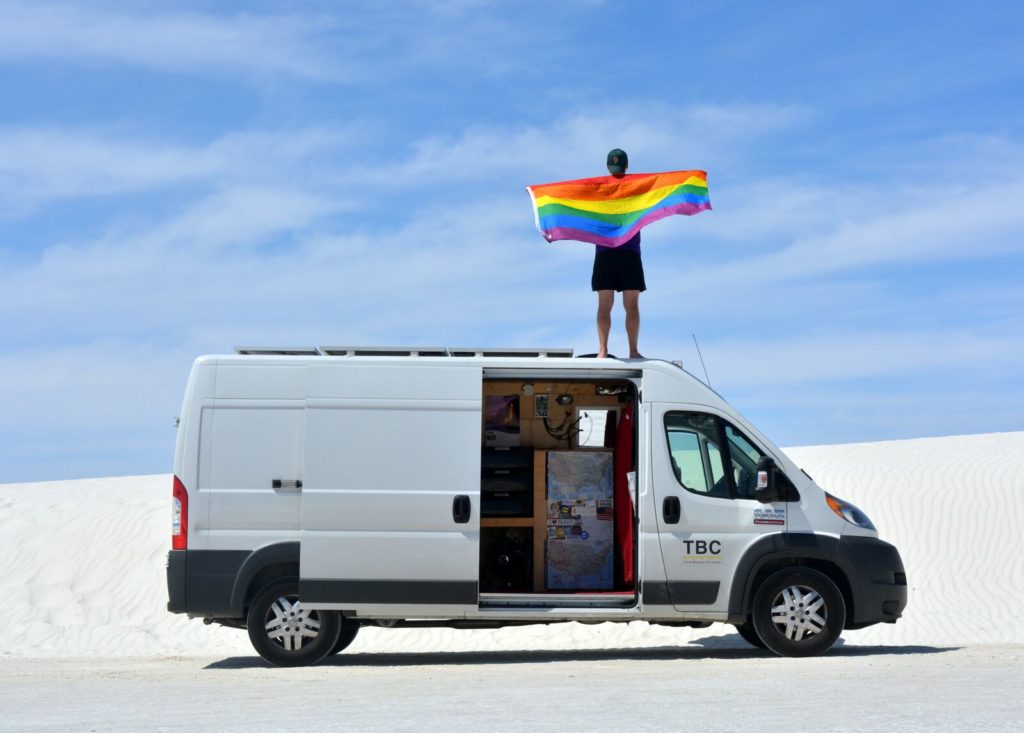 Mikah said he nearly burned his feet taking this photo in the New Mexico desert. “I needed one photo that expressed I was living in a self-converted van, visiting parks, and helping advocate for the LGBT community.” 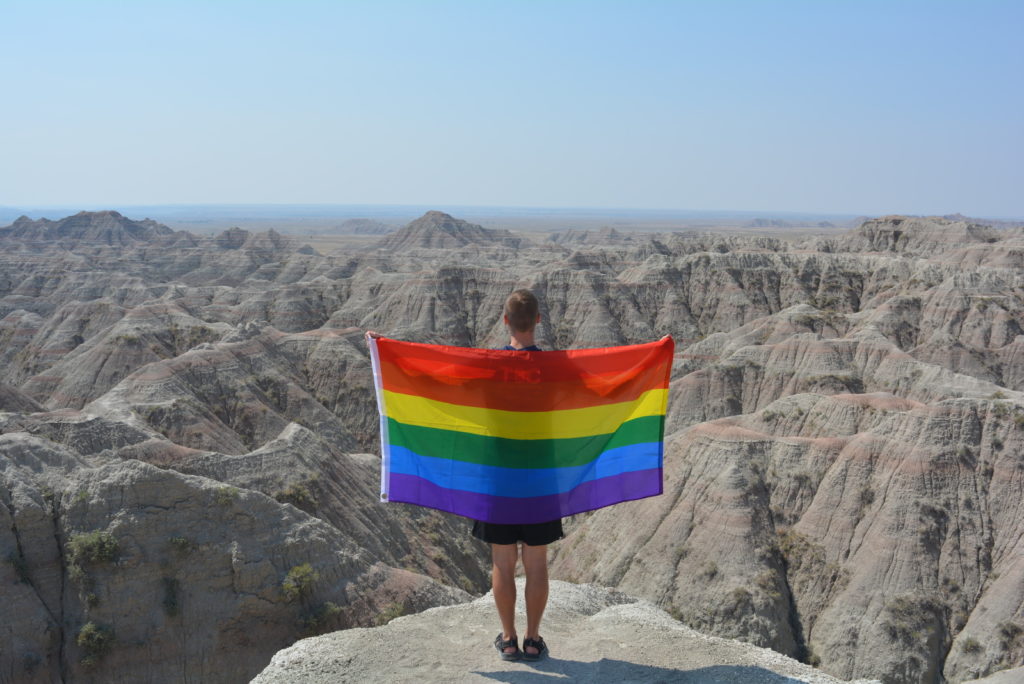 This photo features Mikah’s backup flag after his original one flew out of his hands and into the landscape below. “Since I was born in South Dakota, I like to think that original flag was taken by the wind to some closeted Midwesterner who needed a sign of inspiration.” 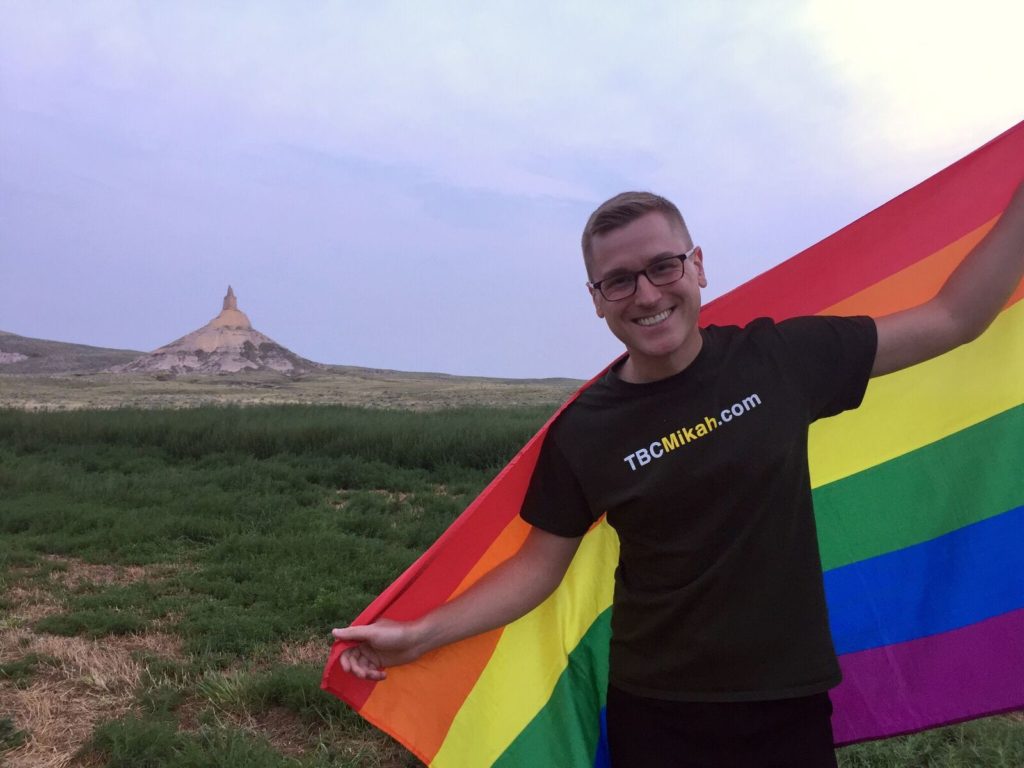 He considers Nebraska his home state. “Because I was never out while living there, I took great pride in traveling to one of Nebraska’s most iconic sites and using the photo in statewide media to share a message of positivity and hope for LGBT Nebraskans.” 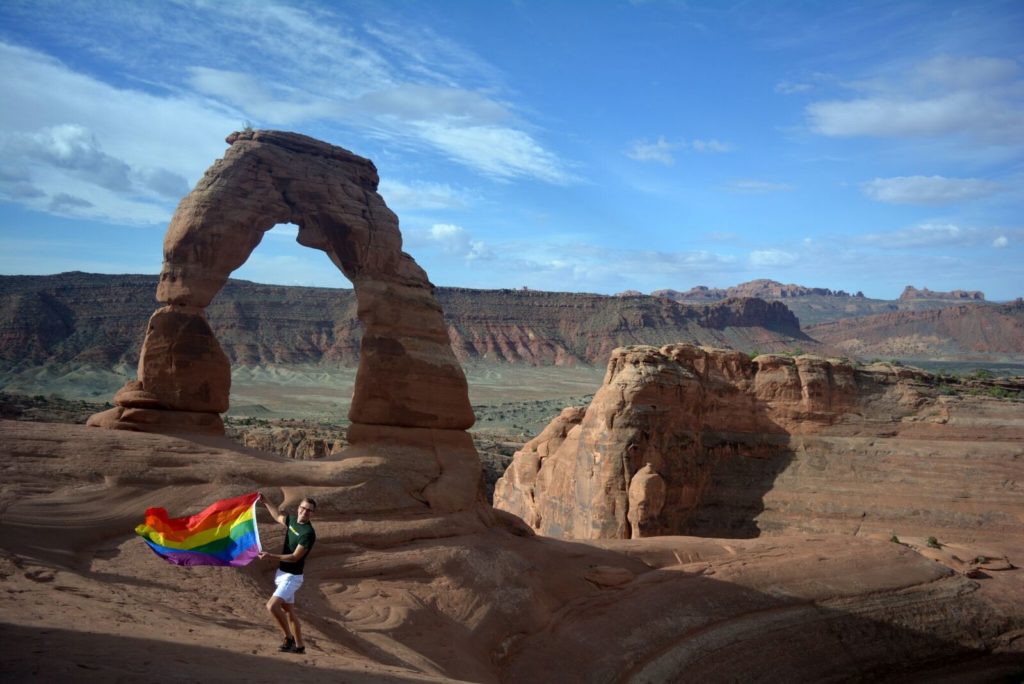 Delicate Arch is one of the most iconic images in Utah and the entire National Park System. “I am proud that in a state with particularly high LGBT suicide rates, this photo ran in Utah’s largest newspaper, the Salt Lake City Tribune, combating the state’s reputation for anti-LGBT sentiment.” 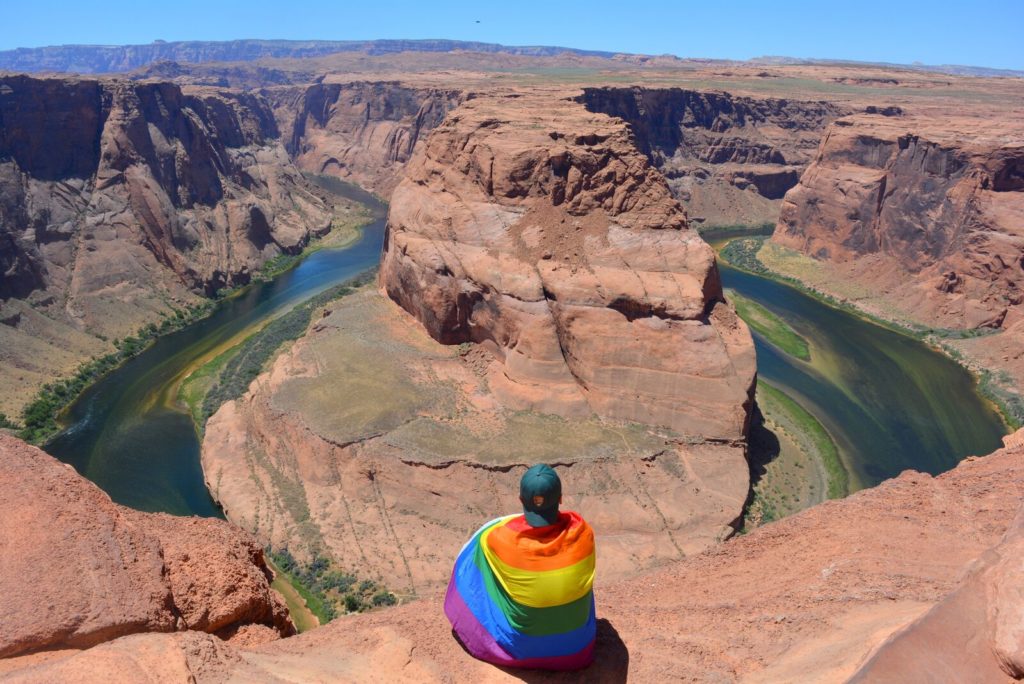 Mikah said not everyone has been so happy to see his rainbow flag. “One time I was taking a picture, running back and forth from my timer, and a visitor asked, ‘What does the rainbow flag mean?’ I told him and he just grunted and walked away.” 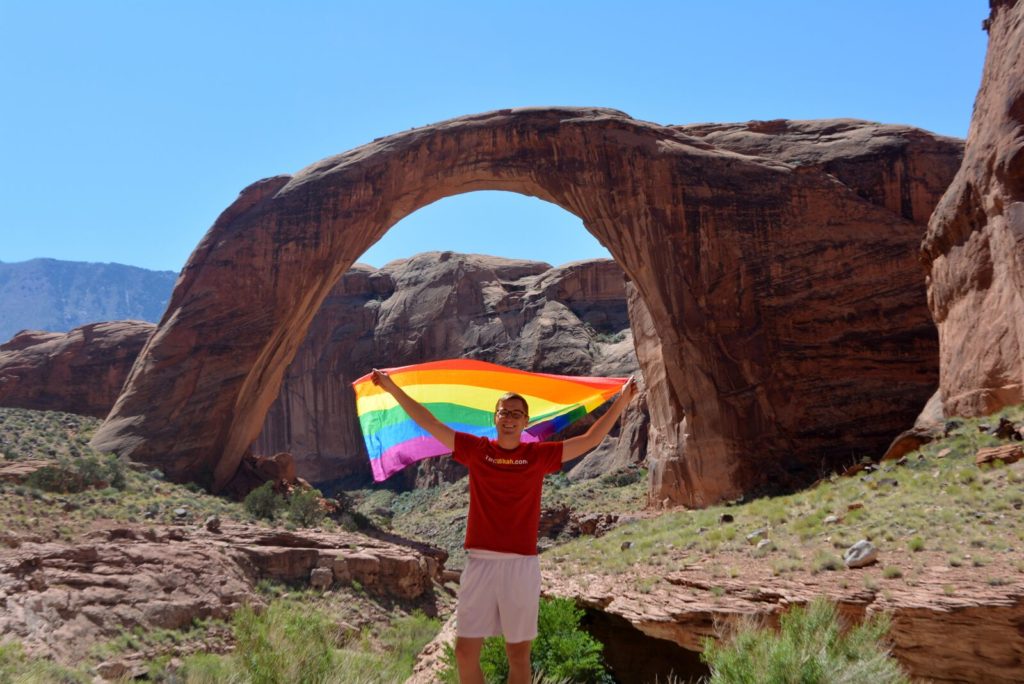 Rainbow Bridge National Monument serves as the logo’s anchor on the t-shirts Mikah created to tackle the lack of LGBT advertising in the outdoor industry. His shirts represent queer people who love the outdoors and allies who support greater representation. 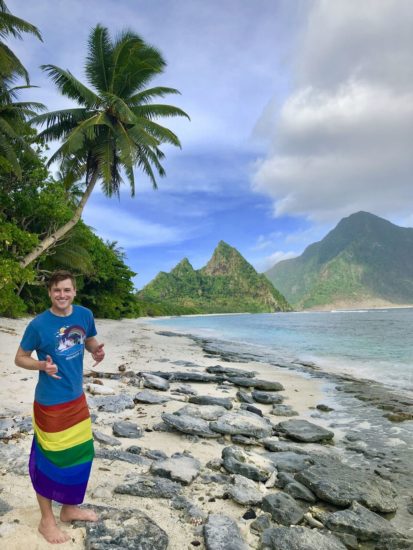 Mikah said on one of the most beautiful beaches in the world, Ofu Island in American Samoa, the wind was insane. “I [had to] wrap [the flag] around my waist and tuck it into the back of my shorts to create a makeshift lavalava (a traditional article of clothing worn by Samoans).” 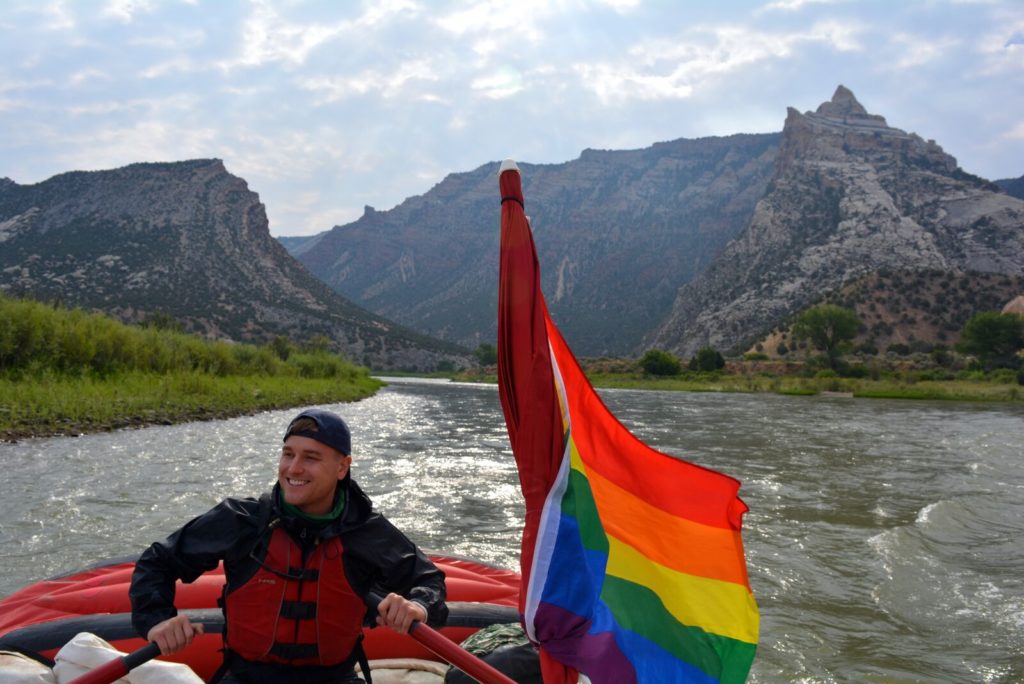 Mikah is organizing a Queer Friendly Rafting Trip through Canyonlands this summer.”Rafting through the national parks has become one of my absolute favorite activities.” 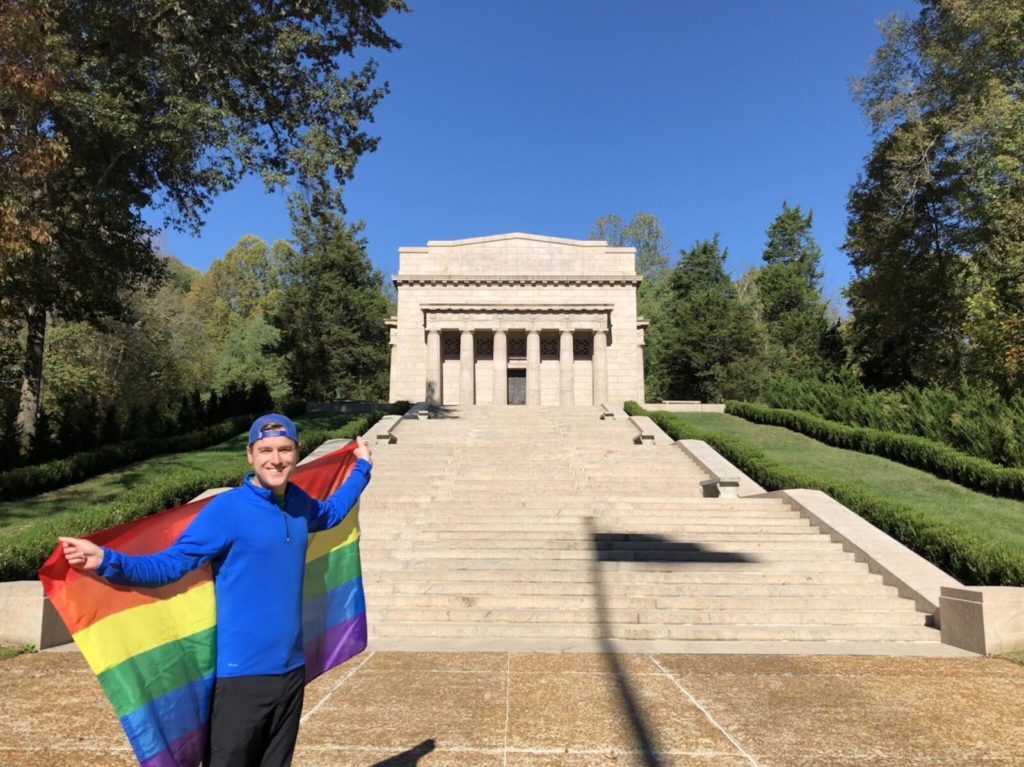 Mikah began his journey at the Washington Monument and plans to end it at the Lincoln Memorial. “I thought it’d be a cool full-circle moment after visiting all 56 states/territories. Just as President Lincoln is remembered for his civil rights legacy, I’m happy my national parks project, in some small way, can add to his legacy.”

Get details on Mikah’s campaign to take the rainbow flag to Alaska’s 23 parks.