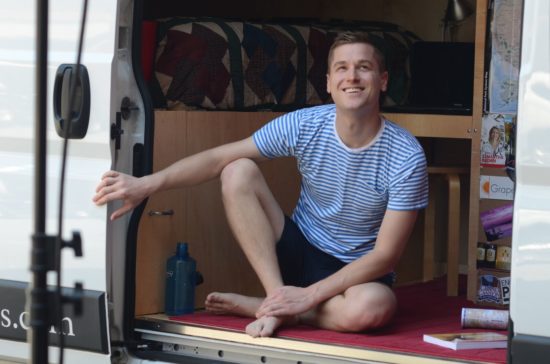 He’s been living in a white, windowless cargo van for the past 22 months while setting a world record as the youngest person to visit all 417 U.S. National Park Service sites. He’s also planning a rafting trip down Canyonlands National Park in southeastern Utah.

GayCities caught up with travel guru Mikah Meyer, a former employee at the U.S. Embassy in Switzerland, during a stay in Somoa. Yes, Somoa.

Mikah is having the journey of a lifetime. The 31-year-old told GayCities about how losing his father inspired his fabulous road trip, the challenges of second dates while traveling, and why you should swipe right if you catch him on Tinder.

Where were you born? South Dakota, but raised in Nebraska (Go Huskers!)

Where do you live now? In a van driving around America

Tell us about the travel journey you’re on now and how it got started.

When I was 19 I lost my father to cancer. He was 58 was a big fan of road trips, so I decided to do one road trip every year around the anniversary of his death to honor him. On the 11th anniversary of his passing, April 29, 2016, I moved my life into a white, windowless cargo van, and have been living in it for the past 22 months while setting a world record as the youngest person to visit all 417 U.S. National Park Service sites. 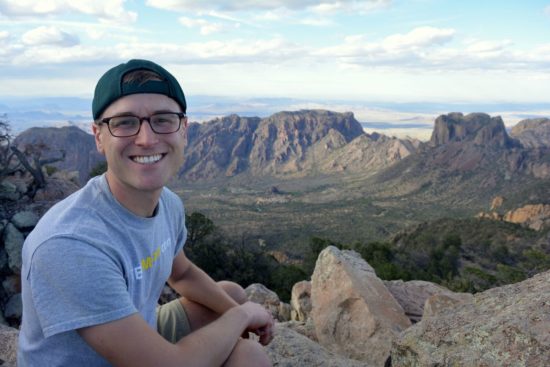 What other projects are you working on?

Everything in my life currently centers around my parks project. When I started this, nature-focused nonprofits reached out and told me LGBT people were severely underrepresented in the outdoors community. They asked if I could do something to help, so I’ve made it a commitment to take pictures with a rainbow flag in front of the Park Service’s most iconic locations, showing the outdoors is for everyone. Don’t get me wrong, I love Project Runway and a good Carly Rae Jepsen remix, but I hope my journey is sharing how LGBT people are as diverse and world-record capable as straight folk. As one teenager wrote me on Instagram, “After seeing your journey, now I know not only can I be ordinary…but also extraordinary!” My goal is to put those images into a photo guide book, and in the coming months I’ll start reaching out to agents/publishers.

Everywhere has beautiful places. What matters is A) Who you go with, and B) Who you meet there. I heard that line from a co-worker at the U.S. Embassy in Switzerland. One place where both happened was Dinosaur National Monument. I was rafting the Green River with my childhood best friend, and a wild Canadian goose followed our boat, hikes, and camp sites for four days. So whether my new friend “George The Goose” or my best friend, that above mantra has continued to prove its truth. 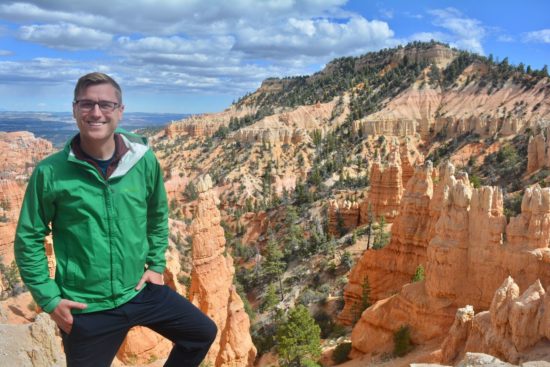 My college choir was on tour in Austria and competing in a competition with groups from ten different countries around the world. I had just started coming out of the closet, and found myself in the good fortune of hitting it off with one of the Swiss singers and changing my post-tour travels plans to visit his idyllic mountain town. It felt like something from a movie, and especially unbelievable because it was happening to little-ole newly gay me. I actually credit that magical experience with showing me all the beautiful possibilities of a life I’d beat down for decades, and giving me the courage to fully come out. While it was the most incredible travel experience I’d ever had, it was also the worst. I had to get on that plane and fly back to America; back to a reality that time and space, and finances, etc. make the realities of love something more complex than a 90-minute rom-com had ever shown.

An around-the-world cruise with ten of my best friends. I love traveling with groups because it allows you to take the energy of your friendship and transplant it to new environments that can be exciting in ways a hometown isn’t.

Where are you traveling next?

[I’m currently at] the National Park of American Samoa, site #293 of my project. Over the next 14 months and 124 parks, I’ll go to Hawaii, up California, Nevada, Oregon, and Washington en route to a summer in Alaska. Then across Canada to the Midwest and Mid-Atlantic before flying to Guam and ending this journey to all 56 states/territories on April 29, 2019 at the Lincoln Memorial in Washington, D.C. After that, who knows. After three years of nature, solitude, and an inability to go on a second date, I want people, culture, and to be surrounded by gays. 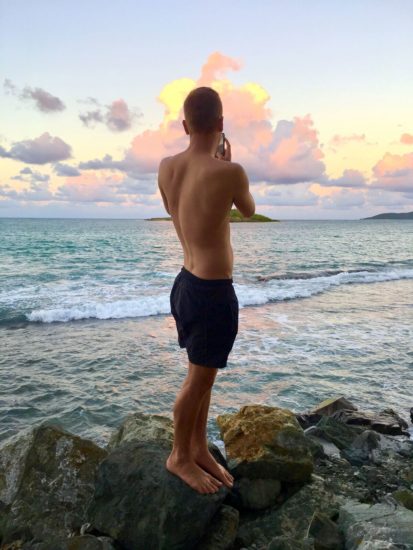 You specifically sing in churches.

I worked and saved up for a decade to launch this project, and started running out of money 11 months in. My former boss at the Washington National Cathedral Choirs suggested I “sing for my supper” at churches along the way, putting out a basket to allow donations that’ll fuel me to the next park. Having studied music and spent the past decade singing professionally, it’s become a beautiful way for me to share songs and stories from the road, and keep myself on that road. As a kid, I swore I’d never become a preacher like my old man, but churches started asking me to share my story growing up gay in the church. So, ironically, I now preach the sermon nearly every Sunday and share a message of hope and acceptance for LGBT Christians.

My dad is grinning, I know it.

Has your religion and sexual identity ever been a conflict of interest? How so?

Oh totally. I spent 20+ years thinking I was going to hell for something I was completely failing at “praying away.” It took me reading the Bible for myself to realize if God didn’t condemn people for being white, tall, or left-handed (characteristics you don’t choose), how could God condemn me for being gay (newsflash, Fox News, it’s not a choice).

There are so many beautiful aspects of Christianity—caring for the outcast, standing up for those unjustly persecuted, being loved unconditionally—that I wish were associated with Christianity more than the anti-this, anti-that Christians getting the attention. I see the LGBT community doing so many of these Christian tenets, by treating people with the love and respect so many of us were denied by our families/communities, that I think LGBT people can teach Christians a lot about what it means to be Christ-like.

What are your favorite hangouts?

Gay sports leagues. There are few joys greater than kicking a home run and jumping on home plate with a high-kick while a team in booty shorts waves with glee. I love gay-specific spaces like that where people are free to be as femme/masc as they want, and all gender expressions are celebrated.

I wish we had more LGBT-spaces like that, where you didn’t have to shout into someone’s ear over a bar soundtrack just to ask their name. It’s why I’ve set up the first Queer Rafting Trip down Canyonlands National Park this coming August 2018. It’s the wildest section of the Colorado River, and if it’s full of LGBT people, should be the wildest people you’ll ever raft with too! I’d love to have gays from around the world join me for this inaugural trip, so hopefully it can grow and become an annual event for high-kicks and booty shorts. 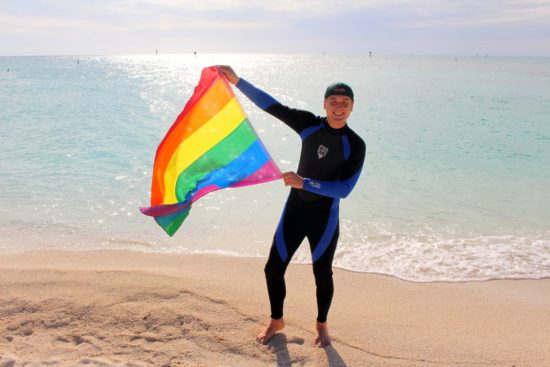 How do you relax while on vacation?

This might be one of the hardest questions I’ve gotten on this journey. A big myth is that my current three-year parks project is a “vacation,” but the truth is it’s more like running a small-business without a postal address or WiFi. Having been on the road for 22 months, I don’t know if I can conceptualize a normal vacation. But when this project ends and I can turn off my brain from logistics-mode, I really want to spend time with my best friends going to trivia nights, playing ping-pong, and having people over to play board games. Because of traveling non-stop, all that “normal” stuff sounds like the most relaxing, beautiful thing right now.

It’s the reason I’m doing this national parks project. When I finished grad school at age 25, I amped up my normal week-long road trip to honor my dad, and spent nine months living out of his car with a goal to visit everyone I’d ever met who was still alive and lived in North America. I credit that experience as making me the man I am today, particularly in helping me break away from the concept of how a gay man should/shouldn’t act. After growing up in the Midwest and going to school in the South, I had only ever known living in communities where being gay was something to be ashamed of, and only spoken about in whispers. Living on the road for nine months, I had no boss, no teachers, no one I had to worry about “offending” by being who I was, so it allowed me to unleash my inner Queen. Not that it turned me into something I wasn’t, but it allowed me to swish a “Hey Gurl Hey” on Friday night, then go hiking with “Lax Bros” the next day, without having to feel like I had to fit someone else’s mold of what a gay man should be.

That “Dream Road Trip,” as I’d titled it, is what inspired me to save up and do something epic at age 30, and I cannot advocate highly enough taking time after high school or college for a gap year. Use the time/freedom to discover who you are, so you can go out into the world and shape it around you, rather than let it define who you are.

Anything else we should know about you?

I’m on Tinder, so if you’re “dynamic, worldly, and can make fun of yourself,” like my profile says, then you better Swipe Right when I come through your town!

Check out Mikah’s video at Dinosaur National Monument in Utah