We can almost smell the ocean salt and bronzer here at the GayCities.com offices as we compile a list of the 10 best gay beaches in the world. But we carefully tiptoed around clothing-optional destinations.

Then we realized stripping down to your birthday suit in public isn’t something to be ashamed about — and, hey, some of the best gay beaches are bare-it-all types. So we decided to bare it all ourselves this time with the world’s ten best nude gay beaches.

The photos are fairly SFW, but proceed with caution if your cubiclemate might swoon at the site of some side-butt. And don’t be prudes: Drop a line in the comments section of the story about any secret sandy spots they might have missed!

Probably the most famous nude beach in America, Black’s Beach is also San Diego’s popular gay destination. (Imagine that!) A secluded area beneath the bluffs of La Jolla’s Torrey Pines, the nude section begins about 100 yards from the Gliderport trail head and ends a mile up the way, at the steel buoy south of Flatrock.

Only the portion of the beach governed by the state park is clothing optional—nudity is not allowed on the section run by the city of San Diego.

One of the few nude beaches in Florida, Haulover Beach is about 11 miles north of South Beach. The north end is the clothing-optional section that’s frequented by gay men with a smattering of women.

A short ride from New York City,  Gunnison is a great spot to let it all hang out with pride. Once part of an Army base, where soldiers used to skinny dip, it’s has been a popular naturalist destination since the 1970s—and New Jersey’s only legal nude beach for over a decade. Since it’s technically federal land, alcoholic beverages are allowed as well.

There is an vehicular admission fee of $10 per car.

Little Beach (also known as Puʻu Olai) is  a small, 660-foot stretch of shoreline in Makena State Park, separated from Big Beach by a steep lava outcropping. One of the few places in the Aloha State where public nudity is kosher, on Sundays it’s also home to fire dancing and drum circles.

The north end of Baker Beach that attracts a gay crowd with either a bathing suit on or just a birthday suit, was the original home of the Burning Man festival, from 1986 to 1990. It atones for the city’s ubiquitous fog with stunning views of the Golden Gate Bridge, which rises above the cool gray mist. And even the fog can’t hide the monuments closer at hand.

While it is technically illegal to disrobe here, the National Park Service generally looks the other way (unfortunate for them) and you should be able to cover up quickly in a pinch.  Women go topless in the lesbian section, just left of the parking lot, while boys bare all in the gay area, about 3/4 of a mile down the way.  The dunes are infamous for cruising, so don’t wander off the beaten path unless you are looking to be found.

To get to this oasis (legally clothing-optional since 2002), take the Hanlan’s Point ferry at the foot of Bay Street and Queen’s Quay. After you reach the shore, walk about 15 minutes up a paved path and then stroll through the brush to the coast, where pristine white sand is not the only natural beauty to behold.

One of the last remaining untouched areas on South Africa’s Cape coast, Sandy Bay is an unofficial nudist beach, though its relative inaccessibillity means it’s unlikely you’ll be molested (unless you want to be). Its a 20-minute walk from the car lot, or you can traverse the Hout Bay dunes, which—along with the mountains—provide privacy and shelter from strong winds. Expect a more tranquil experience than party atmosphere.

This two-mile long stretch of white sand in the Caribbean welcomes all—slim, fleshy, gay, straight—though beachgoers tend to be from the U.S. and Europe with a sprinkling of locals. Those wanting a full-on, full-frontal experience book a stay at the luxurious Club Orient resort. Public nudity is allowed in front of the resort, though you’ll find sun-worshippers in various forms of undress almost everywhere. 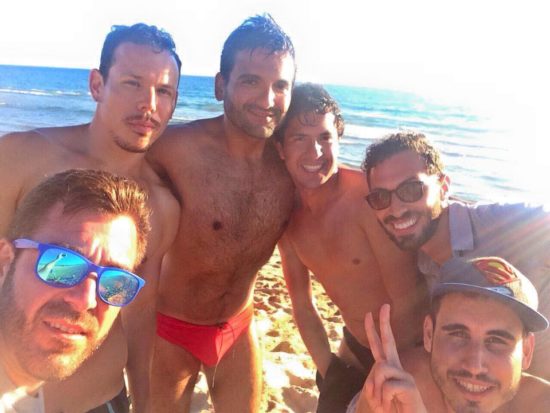 The 19th stop on the little train that runs along Lisbon’s Costa de Caparica is where the nude beach starts (and gets its name). To get to Beach 19, also known as Praia de Bela Vista, walk down the hill, past the straight area and the railroad tracks and you’ll run right into gay bodies basking in the seemingly endless sun.